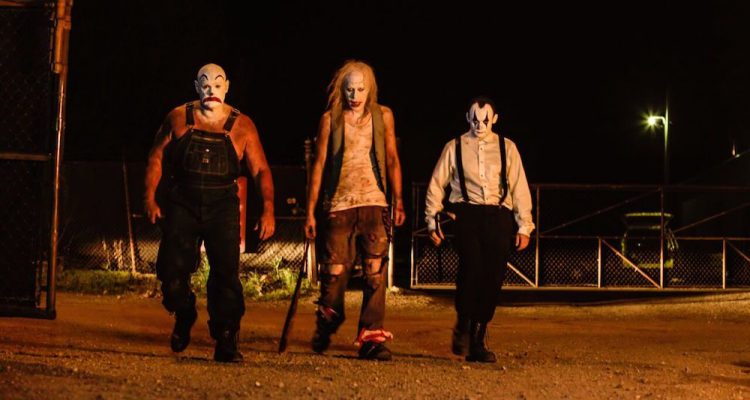 ClownTown doesn’t do anything drastically new with the slasher formula but it has some entertaining kills and gratuitous nudity to be worth a watch.

Plot: A group of friends get stranded in a seemingly deserted small town and find themselves stalked by a violent gang of psychopaths dressed as clowns.

Review: You know how there’s all this creepy shit going on right now with random clowns showing up in towns/woods? Well I thought it was actually a marketing stunt for this movie which is about a town filled with killer clowns.

It isn’t particularly scary but the clowns are creepy enough, especially the one with the long hair which will haunt your dreams for years to come. Some of the acting isn’t the greatest either but it’s a low budget horror; let’s face it John Carpenter’s Halloween is a classic but a lot of the acting is terrible from the supporting cast. None of the main characters are particularly memorable in this and they just feel like disposable pieces of meat that will quickly be forgotten.

Speaking of Halloween there are a few unsubtle nods to the classic movie as the opening scene family are called The Strodes and a babysitter is killed by a child in a clown costume.

By the time the movie ends it is open for the inevitable sequel and I imagine the story would be a SWAT team or group of cops come to investigate reports of killings in the small town but when they get there they end up fighting for their lives. I really should be working in movies…

Overall, ClownTown doesn’t do anything drastically new with the slasher formula but it has some entertaining kills and gratuitous nudity to be worth a watch.