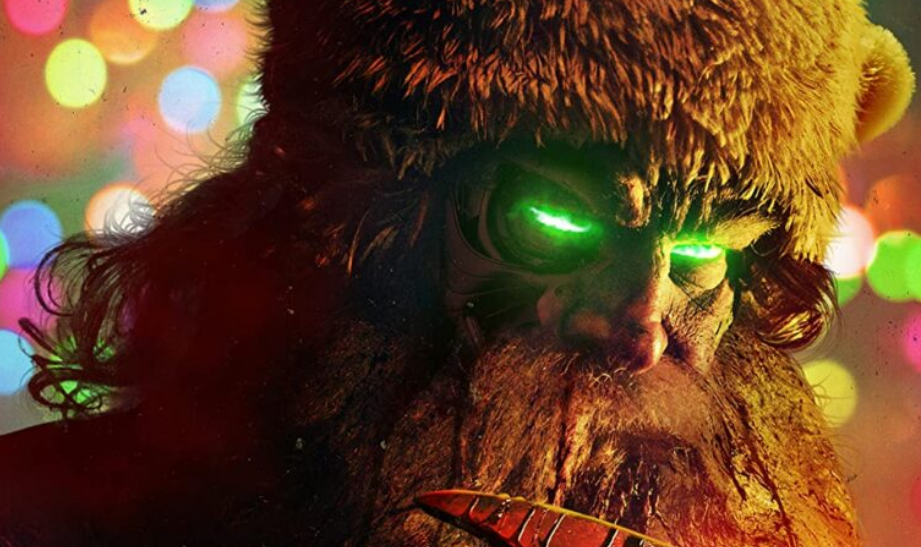 Christmas Carnage at its Best

Christmas Bloody Christmas is filled with white trash characters that aren’t especially appealing but then we don’t feel bad when a killer robot Santa decides his favourite holiday is Dismember 25th.

Plot: It’s Christmas Eve and fiery record store owner Tori Tooms just wants to get drunk and party, until the robotic Santa Claus at a nearby toy store goes haywire and makes her night more than a little complicated. Santa embarks on a rampant killing spree through the neon-drenched snowscape, ultimately forcing Tori into a blood-splattered battle for survival.

Review: All I heard about this movie is that it was a Christmas movie with a killer robotic Santa Claus; that’s all I needed to know that this was going to be my kind of film. Christmas Bloody Christmas lifts a lot from Terminator especially in the finale but it still manages to be its own beast and is a new Christmas Horror Gem that I’ll be watching every season.

The cast are mostly unlikeable white trash who can’t say a sentence without swearing but for some reason it makes them feel like real people as most of the people I know swear that lot… which probably means I’m trash too… oh well.

It takes a little while to get going as it’s establishing our characters however, seeing as they aren’t especially appealing it does mean we don’t feel bad when Santa comes round and starts killing everyone he (or IT more like) sees.

There are plenty of good gory kills and I love the visual style of the movie as it’s filled with Christmas lights and neon although you do start to wonder if anyone in this small town has a normal light in their house.

It reminds me of the Itchy and Scratchy Land episode of The Simpsons with the robots malfunctioning and going on a killing spree as that’s what happens here; for a sequel we should have multiple robots to up the ante…

As I stated above the script mostly involves people saying “fuck” constantly while arguing about nonsensical things (as most people do) but we could have had a few more appealing characters to actually care about.

Overall, Christmas Bloody Christmas is a welcome addition to the Yuletide Slasher genre with plenty of gruesome kills, a nice visual style and regular nods to The Terminator to make it well work adding to your Christmas list.