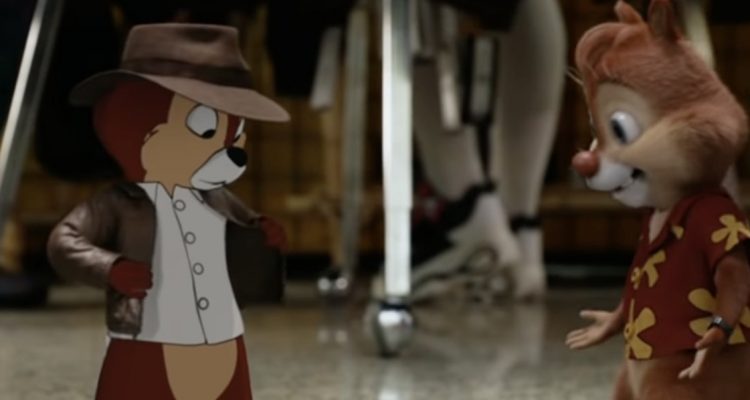 Plot: After falling out 30 years ago, former Disney television stars Chip and Dale must work together to save an old friend.

Review: If there was ever a film that you never knew you needed until now, it would be Chip ‘N Dale: Rescue Rangers. Deemed a comeback and definitely not a reboot, this hybrid live-action/CG-animated movie about decades-old chipmunks is hilariously relevant in all the right ways. A major reason for this is the meta-verse director Akiva Schaffer (Saturday Night Live) and writers Dan Gregor and Doug Mand have shockingly pulled off. The film is laden with classic and beloved characters – with cameo appearances viewers never thought they’d see on screen again. The world is cleverly built and fully realized, with clear intention behind every character appearance.

Let me tell you, Disney does not hold back (in the most PG sense, but still). It was definitely refreshing to see Disney make fun of themselves and play the satire card. The titular characters Chip and Dale (voiced by John Mulaney and Andy Samberg respectively) are the perfect pair. As someone unfamiliar with the beloved Chip and Dale series, there was no problem understanding their backstory. The narrative itself takes place in today’s modern age of social media and live streaming, which made for an interesting clash between old and new.

At the heart of it, Chip ‘N Dale is about making connections in the most unexpected ways. There is something about connecting storylines (ahem, Avengers) – whether it be comedic, heartwarming, chaotic, or in this case all three – that somehow always enhance a viewing experience.

Overall, the film is satisfyingly nostalgic, with equal parts fun and satirical. Packed with cameos past and present, audiences of all ages are sure to enjoy.