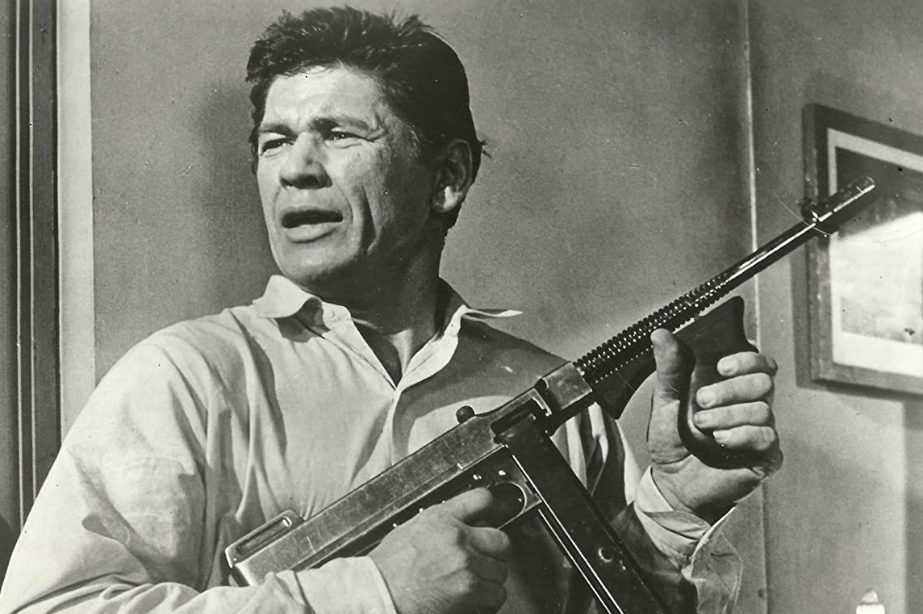 Plot: George R. ‘Machine Gun’ Kelly (Charles Bronson) is a Prohibition-era gangster effectively hiding behind his powerful gun. Kelly is meek, self-doubting and gripped with a paralyzing fear of death. But he’s goaded toward bigger crimes by his conniving moll, Flo (Susan Cabot), and her desire for fame. After his crony Fandango (Morey Amsterdam) loses an arm in a bank robbery, Kelly is pushed into a grand kidnapping scheme that will lead to his downfall.

Roger Corman directs Charles Bronson is this classic crime drama from 1958 with Bronson playing notorious gangster George R. ‘Machine Gun’ Kelly. This is one of Bronson’s best acting performances as later in his career he would be known for playing stone faced badasses however, in Machine-Gun Kelly he’s playing someone who is quite unhinged and violent. He’s only ever tough when he’s carrying a gun otherwise, he’s “yellow” as the poster says as he is petrified of death.

Anytime he sees a coffin or even a funeral wreath he clams up and at point even during a robbery which quickly goes south. We see Bronson laugh hysterically which is rare indeed but this was an almost pathetic character who is practically terrified all the time.

The music score is the old-fashioned big band style (this was 1958 after all) but it gets quite grating and intrusive at times which ended up being distracting.

The performances from the supporting cast are generally impressive but I think this movie belongs to Susan Cabot who plays gangster’s moll Flo who manipulates Kelly constantly pushing him when you know he will explode at any second. She knows what buttons to press and brings a toughness to her character who is arguably more powerful mentally than Kelly ever will be.

At an hour and 23 minutes Machine-Gun Kelly is surprisingly lacking in action and you kind of want to see Kelly going nuts which we rarely get to see. It’s still well paced and tense as nobody can be trusted… least of all Kelly who at one point pushes one of his “friends” known as Fandango (Morey Amsterdam) in front of a lion causing him to lose an arm.

Overall, Machine-Gun Kelly is an entertaining old-fashioned gangster movie with Charles Bronson giving one of the best performances of his career but it’s Susan Cabot who really steals the show.