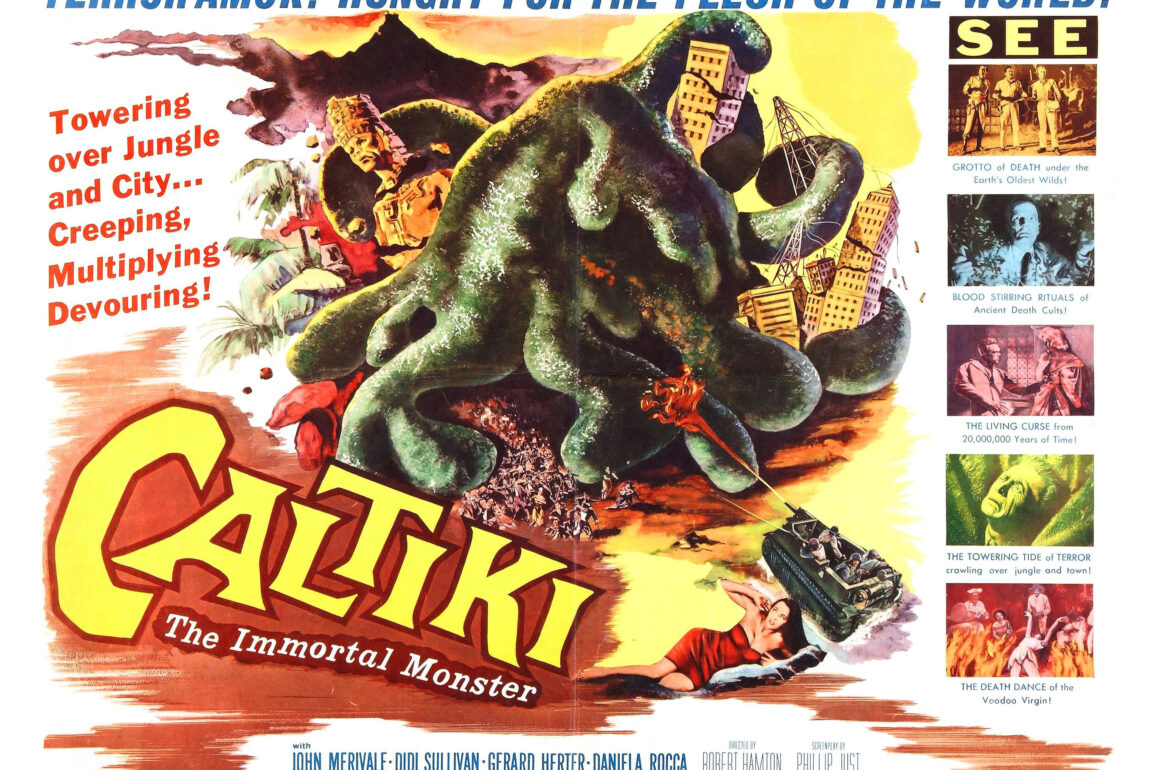 Plot: Archaeologists investigating some Mayan ruins come across a blob-like monster. They manage to destroy it with fire, but keep a sample. Meanwhile, a comet is due to pass close to the Earth – the same comet passed near the Earth at the time the Mayan civilization mysteriously collapsed.

Review: Archeology in the movies has always been a perilous occupation. Mummies, snakes, ghosts, and various other creatures and supernatural forces always seem to be at work against the diggers looking to uncover hidden history. Which brings us to the black and white chiller Caltiki The Immortal Monster, a stylish and shockingly gory Italian monsterpiece from directors Mario Bava and Riccardo Freda. Some archeologists venture to an ancient Mayan city overgrown by ruin and weeds. They plunge into a river with their exploration suits on, find some treasure at the bottom, but they also unleash the Caltiki creature that may have once ruined an entire civilization. The creature resembles The Thing or The Blob, and it devours what it touches (vividly realized on film in some gory scenes). They accidentally bring it topside, where they try to study a piece of it, but as expected it goes on a rampage and might very well bring about the end of the modern world if they don’t find a way to stop it soon. As it happens, a comet will soon be passing over Earth, which might be the portent for the end of all things, as the last time it passed over the planet, the Mayan civilization was still up and around.

Unexpectedly horrifying and stylish, Caltiki was an unknown movie to me until I watched Arrow’s new Blu-ray / DVD combo, which is newly released. Featuring highly stylized cinematography and creature and make-up effects, the movie still packs a good horror punch to the jugular, and so fans of the genre should get a real tasty treat from it. Arrow’s new release features awesome, newly commissioned artwork by Graham Humphreys, as well as original artwork from the film on the flipside of the slipcase. The film was restored in 2K, and features a new commentary by Mario Bava specialist Tim Lucas, and many other newly produced special features, making this release a must have.