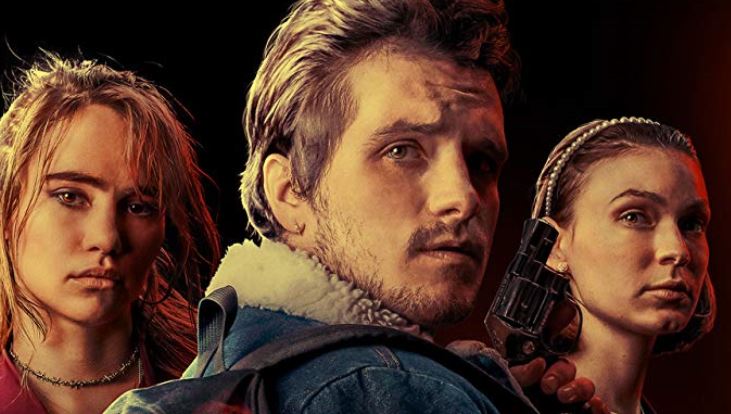 A couple of minor flaws aside, BURN is a clever, tense film with excellent performances. It is worth seeking out and seeing spoiler-free.

Plot:When a gas station is held at gunpoint by a desperate man in need of cash, a lonely and unstable gas station attendant, tired of being overshadowed, finds an opportunity to make a connection with the robber.

Review: Have you ever just wanted to belong? It seems like everyone in their lives has had a period where they felt like an outsider. Everyone has sometimes felt like the most important thing in the world was not your education, your job, or even your future. The most important thing, at that moment, was having a social circle, a romantic relationship, a best friend, or really any friends at all.

Our protagonist, Melinda, has certainly felt this way. She works the graveyard shift at an isolated gas station in a wintery location. Her only real company is her co-worker, Sheila, but Sheila is more interested in texting and social media than talking to her or any other customers. Melinda loves the customers though, she offers recommendations and chats with them like old friends, even if they, like Sheila, seem a little put off by Melinda’s unearned familiarity. Melinda pushes forward though, hoping for a true connection. After all, her job allows her to meet several people every night, like Officer Liu, who stops in regularly and has caught her romantic interest. Even if her awkward demeanor only allows her to pine for him at afar.

What seems like the beginnings of a heartfelt drama takes shape into something much more sinister when a mysterious man appears at the station counter with a pistol demanding all the cash in the building. It isn’t long before he and Melinda are caught in a strange series of escalating events that show just how easily longing can transform into intense desperation.

That is the premise for BURN, the feature-length debut of writer/director Mike Gan. The young filmmaker,  whose lone major credit previously was an entry in HULU’s horror anthology INTO THE DARK titled SCHOOL SPIRIT, likely realized that a noir tale of a “gas station robbery gone wrong” is a fairly well-worn concept and chose to revitalize it by smashing it headlong into a completely different kind of story and then watching the opposing style of characters naturally bounce off each other.

BURN has many moments and turns that the audience will find hard to anticipate. While nothing that happens in BURN feels out of place, the film goes some very dark and surprising places. It could all feel gratuitous, but Gan’s sure-footed directing and clever script never veer into any extremes or tastless-ness. It does, however, keep the tension ramping up throughout the film to an almost unbearable level right up to the fitting climax.

The film is not without fault though, not every moment in the film is hard to anticipate. It does so many interesting and unexpected things, that when it goes an obvious route– it’s noticeable. Also, there is one fairly large continuity gaffe during an otherwise well-crafted scene, that was big enough to pull me right out of the film for a bit before the quality work on display won me back over and carried me through the rest of the film’s runtime.

A film like BURN, with its small cast, single location, and complex script can all be undone if the performances aren’t strong. Luckily for the film, BURN has an exceptional assortment of young Hollywood actors. Suki Waterhouse (INSURGENT) is fully believable as the mean spirited and bored Sheila. The role could have very easily been a parody, ala HEATHERS, but Waterhouse nails what is a pretty thankless role in creating the reality of the film. The same could be said of Harry Shum Jr. (CRAZY RICH ASIANS). His portrayal of the good-hearted Officer Lui never feels anything less than genuine and that fact aids greatly in the mounting tension, involving his character, throughout BURN.

The whole film really revolves around Josh Hutcherson (THE HUNGER GAMES) and Tilda Cobham-Harvey (HOTEL MUMBAI) as the gunman and Melinda though. Hutcherson is charismatic one moment, threatening the next, and even at times sympathetic. His shifting demeanor never feels unnatural, however. The performance on display here shows him to be an actor with a great deal of range that honestly surprised me. Tilda Cobham-Harvey is equally as strong but in more subtle ways as Melinda. Her looks and mannerisms call to mind Natalie Portman but the gentle, yet quietly off-kilter, quality she imbues Melinda’s awkwardness with is uniquely her own. No matter how strange her behavior becomes, and BURN lets her go to some pretty weird places, she never stops being a character you have sympathy for and that is an accomplishment any actor should be proud of. She is a performer to keep an eye on.

BURN is a hard film to classify. It’s a twisty noir in the vein of Hitchcock and De Palma, with a bit of Kevin Smith-style slacker attitude, that isn’t afraid to make strange choices. The film is also a character study of emotional isolation and how damaging that can be for a person. Thankfully, all these elements meld together well and make BURN a film that, while not perfect, is very much worth your attention.