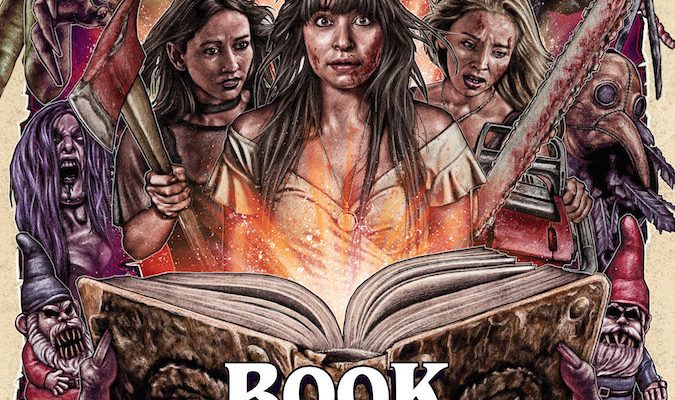 The movie almost feels like a homemade video shot and edited by a bunch of teenagers, with all its creaky, guy-in-a-suit creature effects and clunky scripting, but at least it’s earnest

Plot: Sophie’s 18th birthday becomes a bloodbath when monsters descend upon her house and start to devour the party guests. Sophie and her friends must rally together to send their party crashers back to hell.

Review: Unpopular Sophie (Lyndsey Craine) and her two best friends decide to throw a birthday party for her 18th birthday and they invite the whole school to show up. Sophie’s dad leaves them to it, and the party seems to be a complete flop, until people actually start showing up! But at first, everyone shows up as a gag, and a male stripper is even called in, putting Sophie and her friends in an awkward position. But that isn’t the worst of it: An ancient tome Sophie’s long deceased mother hid in their house is unearthed and some long dormant malevolent monsters escape from the book, wreaking havoc on Sophie’s party! Demonic creatures (and even a couple of possessed garden gnomes) set about to killing the party guests, forcing Sophie and her friends to crack down and fight back. Over the course of the night, the Book of Monsters will have done its worst, but Sophie is a destined monster slayer, so take that monsters!

Gosh, I really wanted to enjoy the ultra indie Book of Monsters, which sports a rad poster by The Dude Designs. The movie almost feels like a homemade video shot and edited by a bunch of teenagers, with all its creaky, guy-in-a-suit creature effects and clunky scripting, but at least it’s earnest. It’s immediately clear which movies inspired writer Paul Butler and director Stewart Sparke, and while flattery is a great compliment to their cinematic heroes, these guys have a long way to go before making something that can inspire other aspiring filmmakers after them. The movie is only 81 minutes, but feels nearly twice as long, which is never a good thing to say about any movie. As I said, I gave Book of Monsters a good try, and you may want to as well, but it just doesn’t come together properly as an effort. The humor falls flat, the creature action is awkward and obvious, and the look of the movie is ugly and indistinct. It could have been special, and I see what they were going for, but it never gets there.

The Blu-ray contains a ton of special features, including commentaries, a making-of feature, deleted scenes, short films, and bloopers.