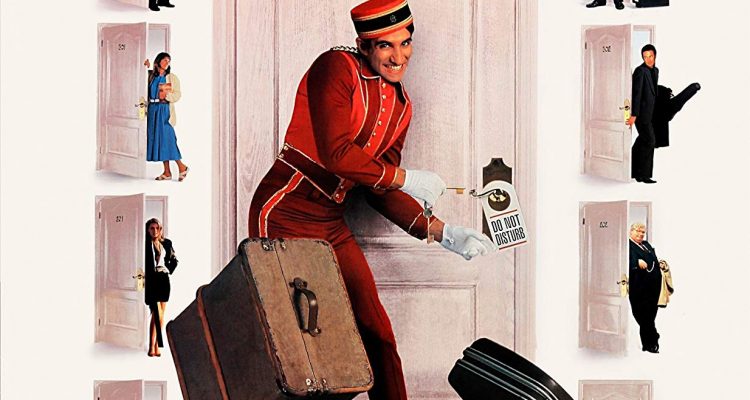 Blame it on the Bellboy (1992) Kino Lorber Blu-ray Review

In the tradition of Blake Edwards’ Pink Panther movies, Blame it on the Bellboy is an endearing little comedy the likes of which simply does not get made anymore.

Plot: A linguistically challenged bellhop in a Venice hotel confuses three guests staying over the weekend, resulting in calamity and comedy.

Review: Three newly arrived guests at a hotel in Venice share similar last names, and the bumbling bellhop (hilariously played by Bronson Pinchot) confuses them and mixes up their messages, causing a chain of events to occur that can’t be undone. A hitman (Bryan Brown) gets the wrong hit order and ends up pursuing a lonely wallflower, while an Englishman on a work trip (Dudley Moore) is snatched by a Mafioso (Andreas Katsulas), who thinks the little guy is out to kill him, and a creepy, philandering married man (Richard Griffiths) mistakes a hot real estate agent (Patsy Kensit) for his “Medi-date.” Eventually everyone realizes they’ve been duped by the helpless innocent bellboy, but by then the calamities have multiplied. The mistaken identity plot happily and satisfyingly resolves itself by the conclusion.

In the tradition of Blake Edwards’ Pink Panther movies, Blame it on the Bellboy is an endearing little comedy the likes of which simply does not get made anymore. I saw this theatrically in 1992 and I’ve been a devoted fan ever since. It still makes me laugh and smile, and it’s one of those little gems that most people don’t know exists. At only 78 minutes, the movie is a real breeze to watch, and I can’t recommend it enough. Trevor Jones did the score, and it was written and directed by Mark Herman.

Kino Lorber’s recent Blu-ray release of this title looks and sounds better and sharper than the previous DVD from Hollywood Pictures, but there are no special features on the disc.