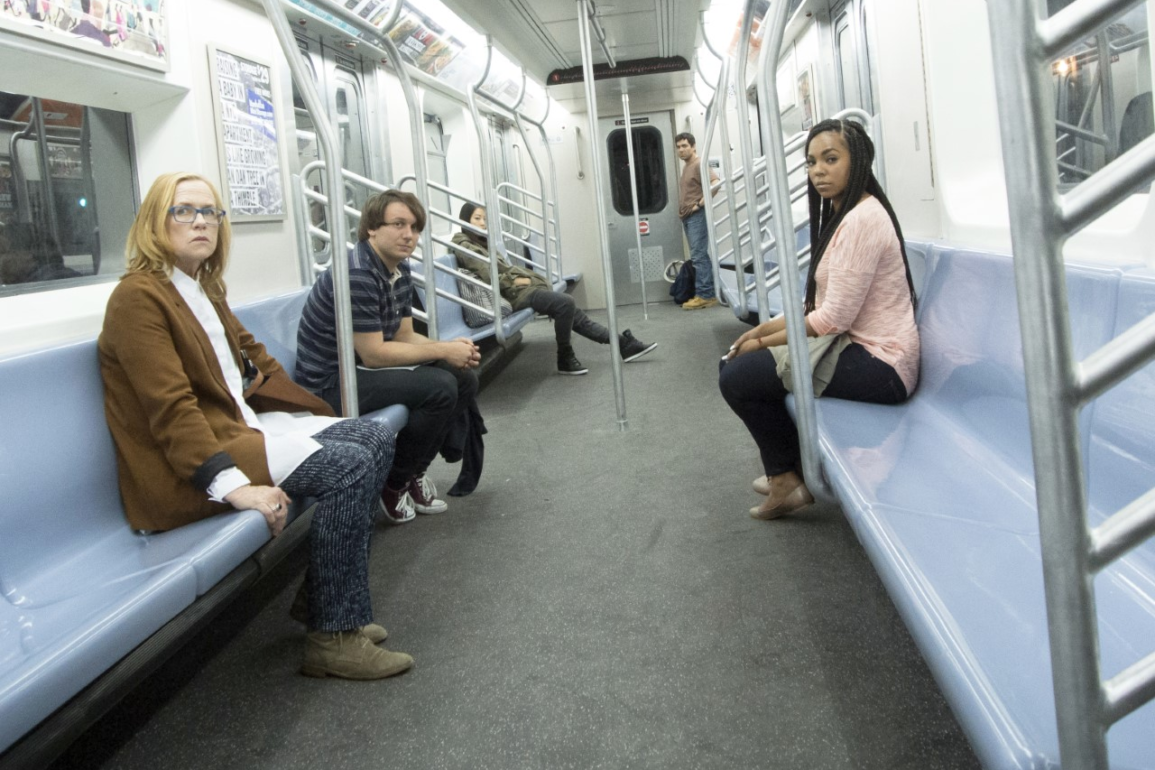 Based on the off-Broadway musical, STUCK starring Ashanti, Giancarlo Esposito and Amy Madigan; Coming To VOD and DVD

“This movie is wonderful. It has the flavor of “Rent” but its acting, story and songs are better” – Jackie K. Cooper

A New York subway train stops in the tunnel beneath the city with six complete strangers stuck inside the rear car. The stranger are a cross section of New Yorkers of different race, culture and age.  The emotions of the trapped, frustrated strangers simultaneously explode as the subway car becomes a kind of magical, musical conduit cell. A place where strangers reveal through song more of themselves than any of them could ever have imagined.

At center stage in Lloyd (Giancarlo Esposito), a homeless man who seems to be a fixture on the subway car. Lloyd is a mystery. A combination observer, prophet, mediator, artist, friend and psychologist.  Or perhaps just a lost soul who is possibly insane. He is joined at various stops by five other commuters. Eve (Ashanti), a brooding but strong, intelligent, career-orientated African-American woman dealing with a troubling personal situation. Ramon (Omar Chaparro), a hard working Hispanic man working multiple jobs to make ends meet for his wife and girls. Alicia (Arden Cho) a guarded and reclusive Asian dancer with a devastating secret. Caleb (Gerard Canonico), the young comic book artist who has been loitering at the studio where Alicia dances. And Sue (Amy Madigan), a college music Professor still dealing with the heavy loss of a loved one.

The music and songs in the film are all original with musical styles specific to each character- a lyrical and musical extension of their culture, thoughts, story and experience with the elements of pop, rap, rock, classical and motown- set almost entirely on the New York City subway.

Stuck will be available on digital on August 27 for an SRP of $4.99 – $9.99 from platforms including iTunes, Vudu, Playstation, Google Play, Xbox, and FandangoNow, as well as cable affiliates everywhere and to buy on DVD for $19.95 on September 17, 2019.

“Stuck has been one of the greatest, most rewarding, and most challenging projects I have ever been associated with”, says director/co-writer, Michael Berry. “My hope is that these six characters who are trapped on this train and are so much more than they appear at first glance, will remind audiences that now, more than ever, we need to meet others with more compassion. Truth is, every one of them and every one of us, no matter where we come from, is someone’s daughter, son, mother, father, uncle or aunt. We are way more alike than we are different and we are all stuck here together, just trying to get where we are going”.

“We are proud to be presenting Stuck on VOD and DVD”, says Vision Films CEO/ Managing Director, Lise Romanoff. “With it’s resonating themes of kindness and humanity, it is sure to bring a smile to everyone’s face as they sing along to the unforgettable original soundtrack!”