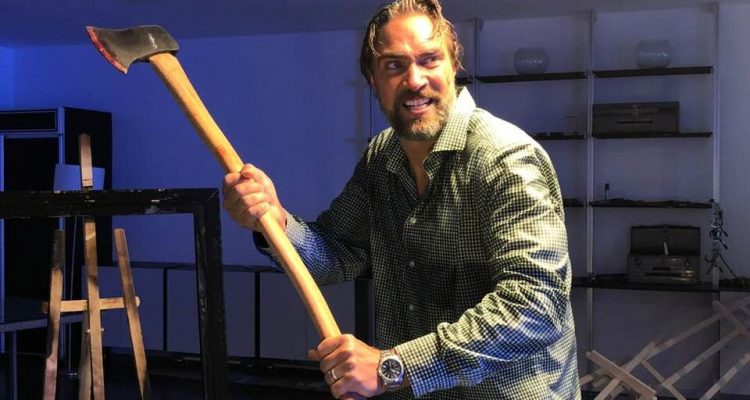 Fans of The Ray Bradbury Theater, Night Gallery and Tales from the Crypt and who are savvy enough to catch references of each should see the inherent art present in Art of the Dead.

Plot: A collection of paintings unleash horror on an unsuspecting family corrupted by the seven deadly sins of greed, envy, gluttony, lust, sloth, pride, and wrath.

Review: Picture your average pharmaceutical commercial on television: an unnaturally happy and perfect looking family, seemingly unrelated to the medication or condition at hand, enjoying themselves at all times, all smiles, but with an all too predictable laundry list of potentially horrific side effects read off by the narrator during the entirety of the family’s interaction with each other: “Possible side effects include psychotic episodes, thoughts of homicide, or hallucinations of Satanic painters.”  Now, imagine if those horrors suddenly took place at once within the latter half of the commercial’s runtime, culminating in hell breaking loose in a way that would make any imaginative commercial producer proud.  Such is the best description of Art of the Dead, the recent horror offering from Rolfe Kanefsky (Party Bus to Hell, the Emmanuelle series) and Mahal Empire.

Ideal couple Kim (Alex Rinehart) and Louis (Zachary Chyz) visit Louis’s well-to-do family, the Wilsons (Jessica Morris and Lukas Hassel), who have recently acquired the art collection of the infamous Dorian Wilde (Danny Tesla) from an auction of a recently deceased collector (Richard Grieco, 21 Jump Street) at the gallery of Tess Barryman (Tara Reid) and have adorned his works throughout their palatial mansion.  Little do they know that Wilde’s animal paintings are in fact representative of the Seven Deadly Sins, and despite warning from disgraced priest Gregory Mendale (Robert Donavan), those sins begin manifesting themselves within any who gaze upon any of the paintings at length.  In short order, the Wilsons, Louis’s teenage sister (Cynthia Aileen Strahan) and the younger children all fall prey to the respective sins, not only exhibiting extreme personality changes but also becoming absorbed within the paintings themselves, all part of Wilde’s plan for his supernatural curse leading to his own immortality.  Only Kim is left unaffected.  Can Kim discover the source of the curse and can anyone help her destroy it?

Art of the Dead boasts some original storytelling, combining familiar religious themes and metaphorical transformations with a claustrophobic indoor setting, but its pace is so chaotic and rapid that there isn’t much room for serious character development, and the effects are rather uneven.  This notion is formalized immediately in the first scene by a brief appearance from Richard Grieco, who seems to have been possessed by the same breed of acting demon as has been inside Nicolas Cage for the last 20 years, each probably consuming the same number of energy drinks for such performances.  In fact, the majority of the characters who share significant amount of time with each other onscreen display this kind of manic energy: Hassel’s metamorphosis goes from pharmaceutical commercial dad to the pushiest and angriest corporate businessman imaginable, like a stereotypical airline patron version of Bane, and Jessica Morris suddenly becomes the horniest housewife you can find in a video section that isn’t Adults Only.  The number of sins and corresponding characters presents a development issue, however, with the changes in each character becoming rather rushed, even moreso in the illustration of the dichotomy between Wilde and Mendale.  The latter becomes the most interesting character via Donavan’s terrific performance, literally transcending planes, but Danny Tesla portrays a wonderfully sinister inverse performance, and his presence is so fragmented and brief each time that it doesn’t quite contrast effectively.  The gore effects are mostly practical and appropriately visceral, but the creature effects and makeup do not mesh well with most of the movie’s lighting, with the monster(s) looking almost laughable when moving around, and many of the women looking yellow, nearly to the point of resembling That Yellow Bastard from Sin City.  The third act is where everything is at its most chaotic, although some aspects of the story are resolved rather poorly or not given quite enough of the appropriate mood.

Still, despite some balance issues in various facets of the production, Kanefsky works with what is available to present an entertaining and original combination of eerie, sexy and bloody that adds up to a multi-flavored 7-Eleven Slurpee to quench the horror thirst.  Fans of The Ray Bradbury Theater, Night Gallery and Tales from the Crypt and who are savvy enough to catch references of each should see the inherent art present in Art of the Dead.

Written and directed by Rolfe Kanefsky.  Story by Michael and Sonny Mahal.