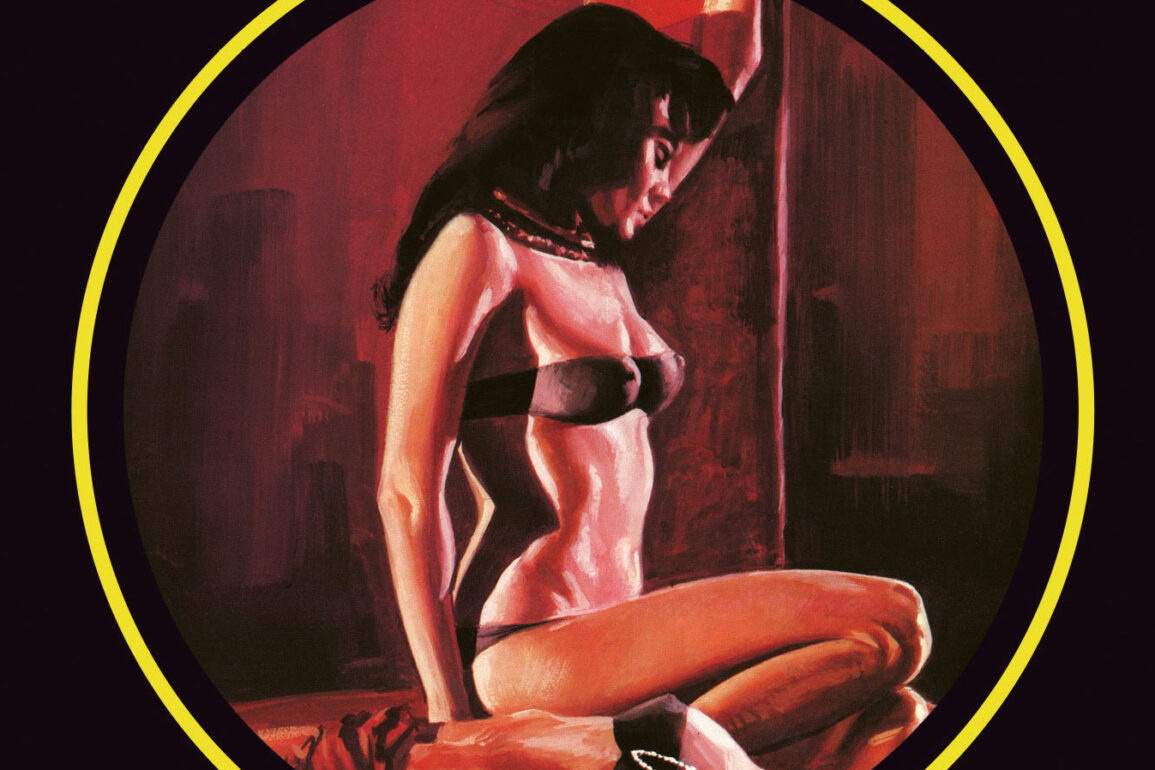 Arrow’s exploration of an underrated genre continues with this collection of three little-seen giallos, all of which are nicely presented on Blu-ray.

Nine guests are invited to a dinner party at a mansion connected to a theater … and a killer takes them out one by one.

A rich aristocrat named Davenant (Chris Avram) gathers unto himself nine guests at his old mansion, which is adjoins a huge theater long defunct. His guests are attractive nobles, wealthy deviants, and sex hungry couples who are intrigued by the invitation, not quite sure what their expectations are for the night. When they’re greeted by Davenant, he informs them that this is his ancestral home, and that there’s a rich and sordid history surrounding the house and the theater, and as he disappears off and on throughout the tour of the home, the couples split off and make their own way through the theater and home. This gives the characters plenty of opportunity of engage in sex, disrobing, and explore sex and disrobing with those they didn’t come to the party with … which also gives a masked killer enough leeway to pick people off one by one, by impaling, stabbing, or by other means, including falling props from the scaffolding in the theater. When the group realizes they’re being hunted, they turn against each other and scramble like rats, but the killer is in their midst and knows the landscape better than they do, which gives him (or her) an advantage.

Like a lot of similar killer in the house or theater movies like Stagefright or Clue, The Killer Reserved Nine Seats becomes a little claustrophobic, but it tries to keep things sexy by throwing a ton of sex and nudity at the viewer, which I suppose helps. The killer’s mask is weird and unusual and resembles a mannequin’s face with a gnarly unibrow, and the movie doesn’t shy from its slashings and sexual assaults. I’d never heard of this giallo before, and since I’m always in the mood for a new one, this was an easy viewing for me. From director Giuseppe Bennati. Scored by Carlo Savina.

Arrow’s Blu-ray edition of this title includes a new 2K restoration, a new audio commentary by Kat Ellinger, a video interview with one of the actors, an interview with the screenwriter, trailers, an image gallery, and more.

A young woman comes home after being at boarding school, only to find that her stepfather and his girlfriend have killed her mother for the insurance money.

An insecure young woman – a teenager – arrives at the doorstep of a home where she announces herself to two older strangers: Marco (Silvano Tranquilli) and his mistress Gianna (Rosalba Neri). They’ve never met this girl before, but they assume she’s Nancy (played by Jenny Tamburi), Marco’s stepdaughter he’s never met before. Nancy’s mother was recently murdered by Marco and Gianna, but they made it look like a suicide, and the life insurance benefits are coming soon. Marco is a photographer, and Gianna – who has an intense sexual attraction to the nubile Nancy – convinces the girl to pose for Marco in sexual poses. Nancy is unsure at first and quite shy, but before long Nancy is gets into the groove of feeling sexually free and unabashed, and Gianna comes onto her very strongly. When Nancy resists her and tries cozying up to Marco – who is not related by blood – but Marco feels (at first) that it’s wrong … but he eventually comes around. With a wildly out of control young woman upsetting the balance of the house and fervent jealousies creating a rift between the older lovers, Nancy invites a houseguest over – her young lover. We find out that this girl was not a schoolgirl at all, but a popular prostitute living a dangerous life with her boyfriend, and when the real truth about her identity is revealed, the older couple hoping to cash in on their murder lose all hope as they realize that they’ll likely see nothing for their efforts because they’ve been had!

A colorful and playful semi-giallo from director Silvio Amadio, Smile Before Death isn’t much of a horror / slasher film, but it feels more akin to an erotic mystery / drama framed around a killing, which happens in the first few moments of the movie. The weird sexual dynamics of the plot involving a teenager and her irreverent behavior get pretty icky, and the movie doesn’t shy from the nudity or sex, which makes the proceedings feel strangely inappropriate and deviant. The film looks really vibrant with all its blazing colors set to a fun, upbeat score by Roberto Pregadio, and so there are certainly some pluses to this film.

Arrow Video’s edition of Smile Before Death comes in a new 2K restoration and a bunch of bonus features, including an audio commentary by authors and film critics, new interviews, extended nude scenes, an image gallery, and more.

A priest involved in affairs with two women is murdered when he breaks it off with both women, and only an orphan child living in the church where the murder was committed knows who the killer is.

A handsome priest (Maurizio Bonuglia) is wracked with guilt over the sinful behavior he’s been engaging in with two beautiful women (one of whom is married) who go to his church. He breaks up with both women on the same day and vows to be chaste again, which infuriates both women who are infatuated with him. Orchidea (Bedy Moratti) is the married woman, and her husband has been working on the church’s architecture, and she also has been serving as a nurse to a little orphan boy who lives in the room in the uppermost floor of the cathedral, and the boy trusts her. The other woman is a card reader / fortune teller named Giulia (Eva Czemerys) who is absolutely crushed when the priest dumps her, and when the priest is found stabbed to death by the organ the next morning, a police commissioner named Boito (Renzo Montagnani) is called in to piece together what happened. The nuns were all enamored with the priest as well, and so there are plenty of suspects (including a creepy groundskeeper with a criminal past), but when Boito begins having an affair with Orchidea, things get complicated when Giulia is found with her throat cut on the church property a few days later. Who’s the killer? Is there more than one? What’s the motive? With the detective’s good judgment called into question, there’s a fair chance the truth will come out, but the only witness to the original murder is the little boy who lives in the room upstairs, but when the killer (or killers) realizes they’ve been made, the boy may end up the next victim …

Part giallo slasher, and part nunsploitation with lots of nudity (there are scenes of nuns showering and then later castigating themselves in the nude) and sex, The Weapon, The Hour, the Motive is a little slow moving, but it has a fairly decent hook and a solid enough mystery to keep you guessing. I was wrong about who the killer (or killers) was, and so I suppose the movie is worth its salt as a mystery. From director Francesco Mazzei (who only did this one movie).

Arrow offers this film in a few 2K restoration, but it is only available to watch in Italian with English subtitles. There’s an audio commentary, a new video interview with one of the actors, and more. 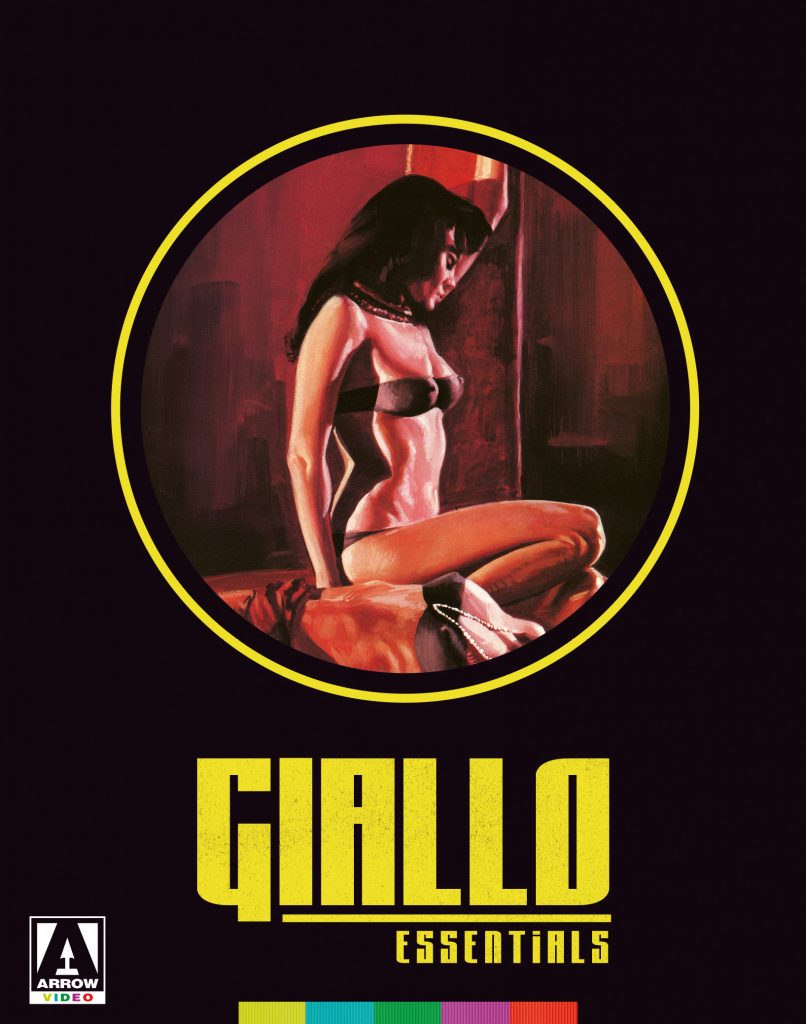