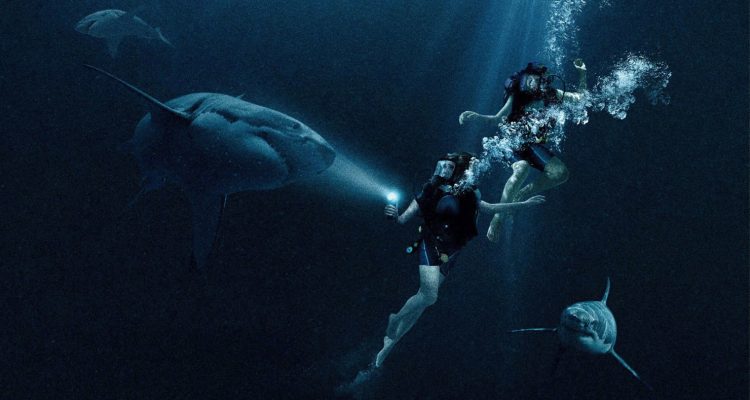 The suspense is on-point for most of this movie and surprisingly, they made two young female characters who didn’t make me want to cringe or throw something at the television.

Plot: Sisters Lisa (Mandy Moore) and Kate (Claire Holt) decide to try shark cage diving while vacationing in Mexico. When the line snaps and their cage plummets to the bottom of the ocean, it’s going to take some fast thinking on their part to escape while avoiding the circling man-eaters overhead.

Review: I have to admit – I’m a sucker for a good shark movie.  Jaws, Deep Blue Sea…it doesn’t get much better than when human beings are foolish enough to get into the water with one of Earth’s oldest predators. When I first saw the trailer for this film, I was stoked to see it – I’ve always found people who want to get in a shark cage a little crazy and the idea that you would could get stranded in such a contraption has always been an interesting idea to me.

First, let’s get to the beginning though and lets just say, it’s a good thing this movie has the whole shark cage thing. Otherwise, there’d be no reason to watch it.  Not that I find the two main characters to be bad; they are written in a way that is more bland than aggravating. That’s just it though; I knew that the two leads were going to be stranded at the bottom of the ocean in a manner of minutes, so the writers deciding to play it safe with the two main characters, while understandable, was also kind of annoying.  Giving me archetypes instead of living, breathing characters is not going to want me to get behind them when the hijinks ensue.

When they do though, the movie really picks up.  The movie tries to explore the different scenarios and ways that Holt and Moore can get out of their situation.  This includes finding a safe spot to radio the boat at the surface (a tricky preposition considering the water is teeming with sharks), to going on a search for a would-be rescuer.  Throughout, the movie stays on top of the suspense, teasing you with the sharks as well as the girls’ diminishing air supply.  There’s enough obstacles and danger to keep you fully pre-occupied, and if you’re like me, you’ll probably spring off your couch, shouting at the television in parts.

The unfortunate thing is, you can’t really see the action when it does take place. While the murk and darkness that exists in existing that far below the ocean’s surface is played to full effect and is entirely believable, it makes it difficult to see what is happening at times.  While I feel this was a decision of the filmmakers, it also feels a bit like a cop-out – part of the fun of these types of movies is seeing the damage that the sharks bring.  Showing me a closeup of the shark’s belly and  quick swim-by isn’t going to cut it.

That being said, this was still an above-average effort – the suspense is real and plays throughout all of the underwater scenes, the girls, while not the greatest characters are at least not unlikeable, and there’s enough going on to make you curl into a ball, fingernails between your teeth, wondering if Moore or Holt are going to end up in the gullet of a Great White.