Thursday is a somewhat nauseating too-cool-for-school knee-jerk reaction to what Pulp Fiction did for indie film and low budget crime thrillers in the mid to late 1990’s. The disc is worth purchasing for the Thomas Jane interview in the special features.

A criminal gone straight has his gentle suburban life turned upside down when his old partner in crime drops a suitcase full of drugs on his doorstep.

After a few years of going straight and settling down in suburbia, former criminal and killer Casey Wells (Thomas Jane with boofy hair) has his entire world turned completely upside down when his old partner in crime Nick (Aaron Eckhart) cruises on by after getting his hands on a massive stash of drugs and cash. Nick plops the suitcase of drugs onto Casey’s lap and then he splits, which leaves Casey in a heap of trouble he has no idea is coming his way. With an adoption agency coming to interview him in a few hours, and his hard working wife (played by Paula Marshall) checking in on him throughout the day, Casey suddenly has his hands full when a drug dealer (played by Glenn Plummer) shows up looking for the drugs … which is problematic, seeing as how Casey flushed the entire stash down the toilet out of frustration. When the adoption agency shows up, Casey scrambles to maintain the guise of a normal life, which quickly spins out of control when his friend Nick’s sexy current partner in crime (played by Paulina Porizkova in an eye-opening role) walks through the door literally in the middle of his interview with the adoption agency. In short order, Casey has several other visitors unexpectedly show up: a sadist looking for the cash, and an undercover detective (played by an intense Mickey Rourke) who is less concerned about the bodies Casey is accumulating in the basement than where the money is. If Casey is going to survive Thursday, he’ll have to dial in those old ruthless killer instincts.

Written and directed by first time filmmaker Skip Woods, who went on to write a number of heavy hitter blockbusters like Swordfish, Hitman, and A Good Day to Die Hard, Thursday is a somewhat nauseating too-cool-for-school knee-jerk reaction to what Pulp Fiction did for indie film and low budget crime thrillers in the mid to late 1990’s. With a solid up and coming cast, but an ultra profane, racist, and sexist script, the movie has enough material in it to cause a riot in today’s ridiculously PC market. I can’t say I liked it, but it certainly feels like a product of its time, which seen and studied today proves to be quite revealing. Fans of Thomas Jane and Aaron Eckhart may want to watch it to see where these guys came from, and Porizkova provides an eyebrow-raising nude scene where she rapes Jane who’s tied to a chair.

Kino Lorber’s new Blu-ray edition of Thursday presents the movie in high definition for the firs time, and on the disc is a 14-minute on-camera interview with a disheveled Jane who is clearly wasted on something. This interview is worth the price of the disc alone, as Jane hilariously rambles on about his career during the time he made Thursday. There’s also an audio commentary by a film historian. 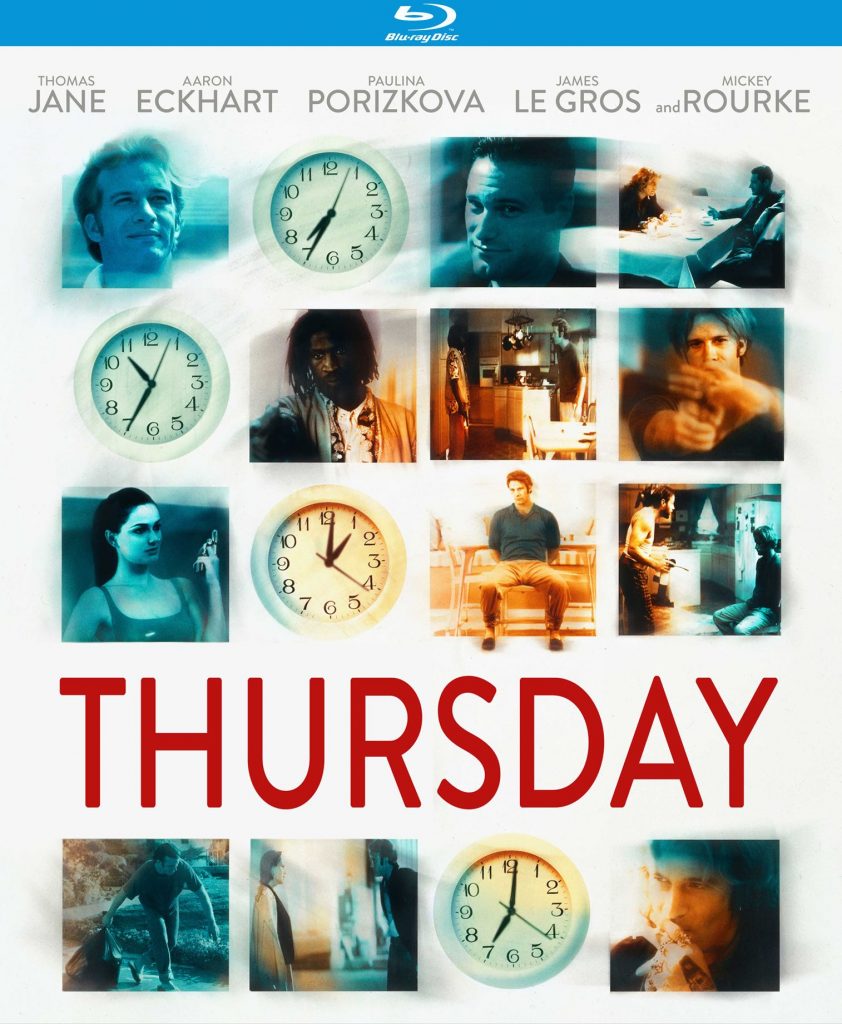