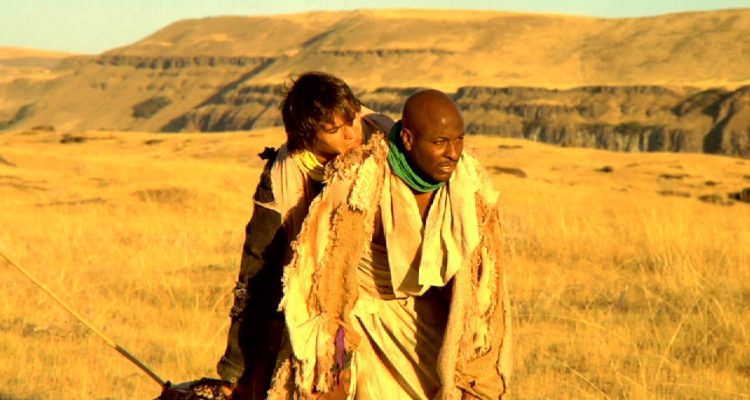 Review: Sowelu Theater director Barry Hunt makes his directorial debut on film in The Further Adventures of Anse and Bhule in No-Man’s Land, a colorful and stylistic post-apocalyptic offering chock-full of social commentary, with loads of metaphorical, religious and tribal symbolism approached in a way that will no doubt catch the viewer’s attention while not doing so in a pandering or consumerist fashion.  An adaptation of an original stage production in 1998 from Tania Myren.  As described in the press screener, “Shot in a 70’s retro art-house style, Anse and Bhule is an original drama of two cultures that survive a cataclysm.”  The tribal “master and apprentice” pair of Anse (Garfield Wedderburn, Grimm, MacGyver), the decidedly more “alpha” or “Prime” of the two as described in the movie itself, and Bhule (Daniel Hill, The Child and the Dead short film), the younger, more idealistic and emotional if not naive apprentice character, both wander the more primitive and tribal earth during their vision rituals, cleansing it of “Wigglers” who are apparently disease-ridden humans, presumably from radiation poisoning, from the look of things.  Upon encountering an older female (Lorraine Bahr, Cabin Fever) who fits this description, the pair immediately show some difference of opinion and mercy in how to deal with her, a source of tension exacerbated all the more by her daughter Persephone (Kelly Tallent, Anoosh of the Airways).  The choices made and sub-alliances formed from this point on in the film, as well as the inevitable emotions involved with life, love and death, carry the bulk of the story, questioning loyalty, morality, reason itself and where each character stands in interpreting them.

While the characters in Anse & Bhule are led to make decisions and interpret their own meaning as to what should happen next, so too does the viewer inevitably identify with each character’s motivation and put themselves in their position.  While it would be easy to slap a “post-apocalyptic” label on any given movie, add some future version of tribal bad guys or “radiation zombie” style creatures for the protagonists to fight, this one takes plenty of chances in its original storytelling and relies more on its characters, symbolism and use of color rather than just regurgitating any survival cliche or pointless filler.  You won’t find any Wiggler chase scenes pumped by heavy metal music in the background here.  Even the diverse cast places the characters in positions that would likely be changed in commercial, corporate filmmaking.  Instead of the movie telling you “Here’s the future!” it instead has the viewer asking themselves “How would you approach this if it were you in a similar situation?”  There are some obvious themes of master vs apprentice, barbarism vs intellectualism, and tribal loyalty vs common sense, but when they are presented in a more subtle fashion, as they are here, the film keeps you interested the whole way through.  The actors, none of whom are big or recognizable names, take themselves and the story very seriously, and you can tell everybody involved in this project cared a great deal about the finished product.  The Jon Clay soundtrack is mostly serene, but sometimes overwhelms the subtitled dialogue, an additional quirk added to this story by virtue of the characters speaking a degraded English language.  The few bits of “action” that accompany the plot come across as something you would see in a stage play version of the movie, but this is to be expected, given the purist approach.  This is the kind of original storytelling from which you very well might see others borrow elements in their own stories or film projects, and in a day and age of cynical cinematic marketing tactics, franchise updates and remakes, Anse & Bhule is a storytelling endeavor that should be sought out and likely much appreciated.