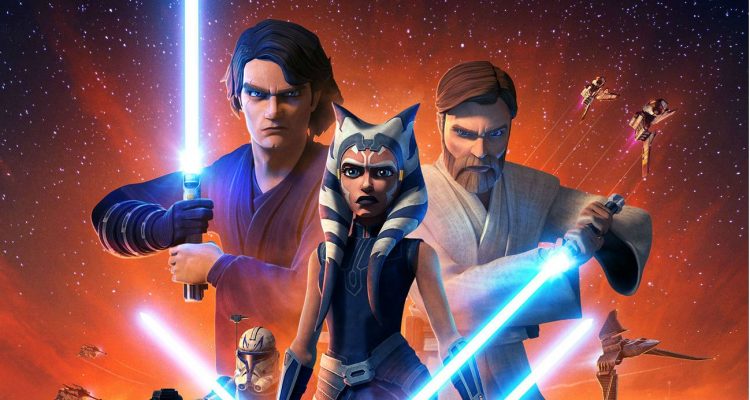 The Clone Wars really helps fill in a lot of blanks about the lead up to Order 66 and there are some fantastic new characters like Ahsoka and Ventress but there are a lot of storylines that go on longer than they need to. It’s an enjoyable show but as someone who grew up with the original trilogy then I think I prefer Rebels.

Review: During this never-ending lockdown my brother and I decided to rewatch the entire Clone Wars series from scratch so I could review it with fresh eyes.

There are moments of genius and blissful weirdness but there is a lot of crap as well so let’s take a look at the show and see how it holds up.

Season 1 starts after The Clone Wars animated movie when we were introduced to Anakin Skywalker’s new Padawan Ahsoka Tano; it’s funny how she became so popular because for the first few seasons she was unbelievably annoying calling Anakin “Sky Guy” or giving cute names to everything like calling R2 “R-Twoie”. She was quite awful but they managed to fix her within a few episodes so the character naturally grew and developed… like they should. By the end of The Clone Wars Ahsoka had become one of the most beloved characters so when she showed up in Rebels and The Mandalorian we as fans were ecstatic.

The Clone Wars fills in the gaps that George Lucas never bothered to do when writing the prequels and gives it all a bit more depth.

At first it comes across as a show purely for the kids but as it goes on it gets darker and surprisingly violent; the episode with the lightsaber duel between Sidious, Maul and Savage Oppress ends with Maul being electrocuted by Force lightning and screaming in agony. Yay! We also get regular neck snapping and shocking deaths. There is a storyline involving slavers where helpless victims are dropped into an almost endless abyss which is one of the most disturbing scenes.

The Clone Wars has some awesome villains but I think none rival Jedi Master Pom Krell who sadistically uses his Clone Troopers as cannon fodder and we find out that he has turned to The Dark Side. He is executed in cold blood by the Clones as they see him as too much of a threat to be left alive. We also have Admiral Trench who is a sort of giant tarantula and Anakin disposes of him satisfactorily in the final season. I like how we meet a young Tarkin who immediately bonds with Anakin guaranteeing a long and beautiful friendship…

I’ve always hated General Grievous; I think he’s a one-note character and his constant laughing/coughing gets irritating very quickly. Count Dooku is really the primary antagonist and Corey Burton provides his voice capturing the deep tones of Christopher Lee. He’s such a despicable villain that getting his arms and head chopped off by Anakin almost doesn’t seem violent enough.

I could literally watch an entire series based on The Night Sisters and Asajj Ventress; Mother Talzin is an amazing creation and I love how she has this disembodied voice that echoes after she speaks which makes her all the more creepy. Ventress has a fantastic arc starting off as Dooku’s apprentice but she is discarded by him so she finds herself a little lost. She at first wants revenge for what was done to her but realises that even she and her sisters are no match for Dooku’s powers. They take a local warrior called Savage Oppress (voiced by the amazing Clancy Brown) who also can’t take down the Count.

Ventress eventually leaves after Grievous decimates her sisters and she becomes a bounty hunter who ends up helping Ashoka when she is framed for being a terrorist. Sadly she doesn’t really appear ever again which is a shame; of all the characters I would love to see her show up in Mando as she would be awesome in live action.

After Savage can’t take out Dooku he is sent by Talzin to go find his brother Maul who for some reason is still alive after The Phantom Menace. As much as I love every moment with Maul on screen, to this day, I still can’t decide how I feel about them bringing him back. I mean he was cut in half and fell down a massive shaft… he’s DEAD! Just like Palpatine at the end of Jedi. Stop bringing back characters who clearly died as it takes away any impact of the films!

On the other hand Sam Witwer is awesome as Maul making him more terrifying than ever; he is hungry for revenge after Obi-Wan cut him in half (understandable) so we get some stunning lightsaber duels; the aforementioned battle with Sidious is one of the best in Star Wars history.

We also meet the Mandalorians and one Bo Katan (Katee Sackhoff) who starts off as a loyal member of Death Watch but turns away when Maul takes over. Jon Favreau provides the voice to Pre Vizsla, the leader of Death Watch who thinks the current ruler Satine (Bo Katan’s sister) is too weak. This is where we discover Obi-Wan and Satine have a past and that he did in fact have a love of his life. The story doesn’t have a happy ending but what’s so amazing is that no matter what he has lost (everything!) he never turns to the Dark Side and is one of the most incorruptible Jedi of all time.

There are a bunch of dumb episodes with stories that go on for longer than they need to which I usually skip as they don’t really add anything to the lore.

Why was Jar Jar brought back? Literally the worst creation in cinema history and he is a fucking idiot from start to finish; for some reason he even gets a love interest in later episodes. I always wished he would have been taken out during Order 66 but sadly he was allowed to ruin this series too. Also the droids having those stupid squeaky voices saying “Roger Roger” all the time is terrible but I guess that is purely for the kiddies.

The friendship between Obi-Wan and Anakin is explored and they become quite the buddy duo spouting witty banter back and forth so it adds to the tragedy of it all.

One of the best hand to hand fight scenes in all of Star Wars is between Anakin and Rush Clovis who he sees as a love rival for Padme. It’s incredibly visceral and we needed more scenes like this to make Anakin’s turn to the Dark Side more believable.

Dee Bradley Baker does a wonderful job voicing the Clones making them all feel like individual characters with Rex obviously being the standout and one of the best characters on the show.

It’s really seasons 3 and 4 when things get really interesting and my favourite storyline involves the planet Mortis featuring The Father, the Son and the Daughter who are all strong in the Force and spend their lives trying to keep it in balance. It’s wonderfully strange and creative and the weirder Star Wars gets the better as far as I’m concerned.

Barriss Offee has one of the best arcs of the show with her and Ahsoka starting out as good friends; they are two Padawans with great potential who end up becoming disillusioned with the Jedi and leaving the Order. Barriss framed Ahsoka for bombing the Jedi temple which leads to Ashoka being expelled from the Order; when the Jedi find out the truth and tell her she can come back Ahsoka correctly tells them to shove it and leaves the order behind. Watching these two characters develop throughout the series is one of the best pieces of storytelling and character development in all of Star Wars.

I also thought Yoda’s story in the Lost Missions (Season 6) was incredibly imaginative as we meet the Force Priestesses; Yoda is also visited by Qui-Gon (Liam Neeson) who tries to subtly warn him about Darth Sidious and Order 66.

The Final Season was much hyped but really there about 5 or 6 good episodes; the ones featuring Ahsoka and those godawful annoying sisters are practically unwatchable.

The way the series ends with Ahsoka standing looking over the Clone helmets after Order 66 then dropping her lightsaber in the snow really adds some gravitas to it all. Then it cuts to months (or maybe years later) when Vader appears in the snow and finds her lightsaber; it’s so desolate and leaves you with nothing especially the fantastic music which was clearly channeling Blade Runner 2049.

Kevin Kiner provided the majority of music to the show and its funny how he lifted Vampire Hunters from Bram Stoker’s Dracula; I wonder if they got permission to use it because it’s not even subtle. It IS the actual tune as it’s one of my all-time favourite music scores so I know it off by heart.

After watching the series, you can’t help but think that the Jedi deserved to be wiped out due to their hubris and arrogance. The fact they couldn’t work out what was going on demonstrated that their time was rightfully at an end. I for one welcome our new leader Emperor Palpatine and wish him well in ruling the galaxy.

Overall, The Clone Wars has more good than bad and really makes the prequels slightly more watchable filling in the blanks on what went on around the galaxy up until Order 66. There are some fantastic new characters like Ventress and (eventually) Ashoka making for a flawed but still massively enjoyable fantasy adventure series.