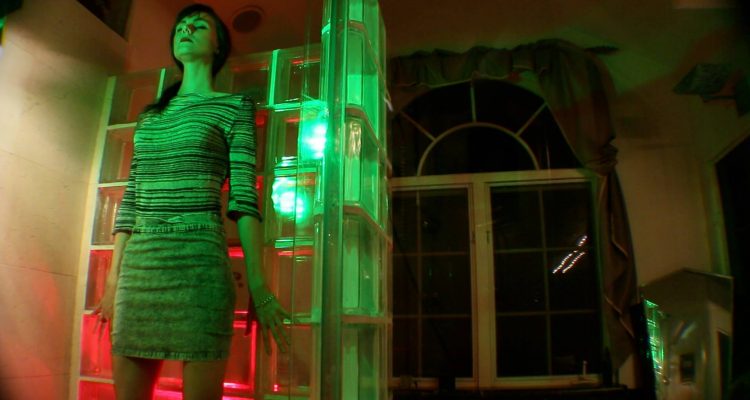 Wildly nonlinear, totally renegade, and nothing that makes any cognitive sense to anyone who doesn’t love cinema, Night Pulse is both brilliant and frustratingly overlong and loose at the seams.

Review: America – namely Los Angeles proper – is about to enter a period of dark sleep: A cabal of corporate moguls and higher ups in government conspire to take over the world by advertising, marketing, and submission. They perform an illuminati ritual and stop the world timeline at 1991, and never again will the world advance or progress, or be enriched by new art … except to be toppled and destroyed by cell phones and the creation of the internet in the foreseeable future. Meanwhile, a goober of a serial killer who spends his every waking moment sitting in front of a television, eating potato chips transfixed by 1(900) ads and commercials occasionally slips outside to stalk and clobber beautiful women, wrapping them with feverish inability with foil. The yuppies who control the world and the crazed vagabonds prowl Sunset and Melrose, spouting off prophetic profanations that Mario Van Peebles’s New Jack City will start a revolution, while Kevin Costner’s Robin Hood: Prince of Thieves will be the ruination of cinema. William Friedkin (dramatized) sits at a table surrounded by yuppies who tell him that the future of cinema is multiplexes and that single-screen theaters are on the way out, which worries Friedkin because his latest film The Guardian is about to open at the single-screen theater in Westwood. Sure enough, when The Guardian is released, it plays to an empty house. A yuppie is chased down an alley and through Rodeo drive by a zoned out psycho, and the only way he can fend him off is with a balloon bandoleer. Julia Roberts (dramatized), fresh from the sets of Sleeping With the Enemy and Dying Young, crashes on some guy’s couch for six months and phases out while watching TV. Not even the goober serial killer can creep her out as he walks by the window. The night pulse is strong in this microcosm of fear, evolution, inevitability, and despair.

If David Lynch cross-pollinated with The Three Stooges, you’d get something like the work of filmmaker Damon Packard. Wildly nonlinear, totally renegade, and nothing that makes any cognitive sense to anyone who doesn’t love cinema, Night Pulse is both brilliant and frustratingly overlong and loose at the seams. If you know anything about Packard, it’s that he’s a purist of an era of movies that can never be duplicated or retread. He laments the passing of that era (which, according to him, more or less ended at or around 1991), and his befuddlement over the way movies are made now and how mass amounts of people consume these subpar works erupts in volcanic fury and comedic frustration in this film. The world these characters inhabit seems to be clouded over in perpetual limbo in between the actual program: commercials and billboards and name brands have permeated the minds and desires of the human race. What Packard is saying – and how he says it – is uniquely in his own voice, but the film drags in long stretches where nothing is happening and where characters spend minutes running after each other through the streets and alleyways of Los Angeles. He uses light and shadows well, though, and his skill as a gorilla filmmaker is fully on display. If you’re paying attention, you will begin to see the seams in Packard’s version of 1991: Telltale signs reveal the post-millennial world, but Packard doesn’t seem to try to hide it. Perhaps he’s saying that this is all just a fevered dream. Who knows? Maybe we’ll find out … in 1992.