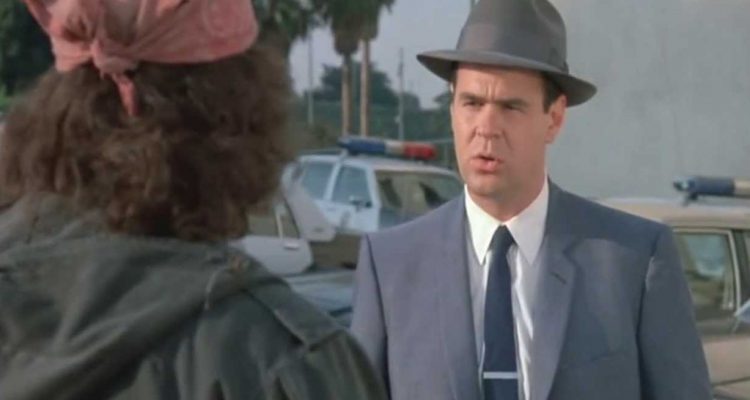 Up to this point, I’ve touched on many different styles of comedians – the family-friendly sort, the motormouth, the absurdist, and the wise-guy. Now it’s time to look at a different kind of comedic actor – the partner in crime. For this type, I present to you one Daniel Edward Aykroyd, a fellow countryman born in our nation’s capital. Aykroyd has had a strange and varied career, which perfectly matches the strange and varied characters he plays – I don’t think any two Aykroyd characters are alike. Let’s take a closer look, shall we?

Exhibit A is the underrated Steven Spielberg flick, 1941. While some people were disappointed that the once and future king of the box office helmed a ridiculous comedy after the sublime entries of Jaws and Close Encounters of the Third Kind, 1941 has its own undeniable charm. Amongst the ensemble cast, Aykroyd sticks out as a tank sergeant who appears to have everything in control until a blow to the head knocks him loopy. He spends the rest of the movie spouting inanities, at one point describing the features of a refrigerator to a befuddled John Candy, while a full-on riot takes place around him. It’s ridiculous – and genius.

That was just a supporting role, though, and Aykroyd had his share of starring roles in blockbuster films. The first that comes to mind is the brilliant Blues Brothers, where he plays the tall and stone-faced Elwood J. Blues, who partners with the equally outrageous John Belushi. Aykroyd serves as Belushi’s running mate here and goes along impassively with Belushi’s insane antics – such as causing a disturbance in a restaurant just to annoy a waiter into rejoining their band. Aykroyd is a perfect companion to Belushi throughout the film, and while Belushi gets his share of credit for his absurdity, Aykroyd is with him every step of the way.

Next, we have Trading Places, which pairs Aykroyd with another talented funnyman, Eddie Murphy. As opposed to The Blues Brothers, where Aykroyd and Belushi are perfectly in sync, Murphy and Akroyd could not be more opposite, with Aykroyd’s arrogant and entitled character clashing with Murphy’s street-wise wise-cracker. While both men are hilarious in the film, I enjoyed Aykroyd’s demise from the ultra-wealthy to mooching off Jamie Lee Curtis to keep himself afloat. Aykroyd’s frantic and confused reaction to his meteoric fall from grace is just a treat to watch.

You can’t talk about Dan Aykroyd without mentioning Ghostbusters. Aykroyd’s Raymond Stantz character is both brilliant and absolutely childlike and hapless throughout, and he’s the catalyst for a lot of the jokes. Who could forget him dreaming of getting it on with a beautiful ghost in the firehouse or how he was the reason for the Stay-Puft Marshmallow Man? And remember, if someone asks if you’re a god, you’re always to say yes. More than any of the movies in his filmography, Ghostbusters allows Akyroyd to shine and show multiple facets to this character, creating a memorable character in one of the most beloved pop culture films of all time.

Though I had never watched the show, I remember Akyroyd particularly when I saw Dragnet in the theatre. Paired this time with easy-going Tom Hanks, Akyroyd’s by-the-book and anal Sgt. Joe Friday is hilarious, refusing to drive over the speed limit (to Hanks’s chagrin) and spitting out police regulations to the letter to his suffering partner’s dismay. While he’s not the conventional type of hero (a character so enamoured with rules that he almost can’t function when someone breaks them), there’s a loveability about the character, and you can’t help but cheer as Friday tries to do right, even if all his spouting of criminal offences to a band of cultists merely results in him being thrown into a pit where a giant anaconda awaits.

One of the actors Akyroyd is most identified with is John Candy, and my favourite of their team-ups was in the John Hughes film, The Great Outdoors. Playing the pompous and obnoxious con-man Roman Craig, Aykroyd again plays a great counterpoint to another character, this time the annoyed family man Chet Ripley, portrayed by Candy. One of the movie’s great scenes is Candy attempting to eat a 96-ounce steak and Akyroyd’s continued “assistance,” where you begin to wonder if Aykroyd is more concerned about a free meal as opposed to the welfare of his brother-in-law. And one thing I can tell you for sure – I would never want either character to help me if I had a bat in my house.

Aykroyd’s starring roles became fewer and farther between as we went into the 90s, but one of his parts from that era that I still remember is his role in Sgt. Bilko. This role, like the rest, was so different from the rest he played – for while Aykroyd usually played extremely intelligent individuals, this was the first really dumb character I saw him play. Martin’s devious and scheming Bilko runs rings around Akyroyd’s Sgt. Hall and you almost feel sorry for his character, as he seems like such a nice and sweet-tempered man, but he’s just no match for Bilko and his bag of tricks. That being said, he’s still the source of a lot of humour as you marvel at Bilko’s constant ability to pull the wool over the eyes of his unsuspecting superior officer.

While he may not have had as many starring roles as others on this list, Dan Aykroyd’s spot is definitely earned. A character actor who can disappear into a multitude of roles, his talent for both the absurd and the witty, the sublime and the ridiculous are above approach. That ability to click with such a diverse set of co-stars and to carry on successfully in a multitude of parts and characters is the reason why Dan Aykroyd has earned his place in the halls of comedy lore.