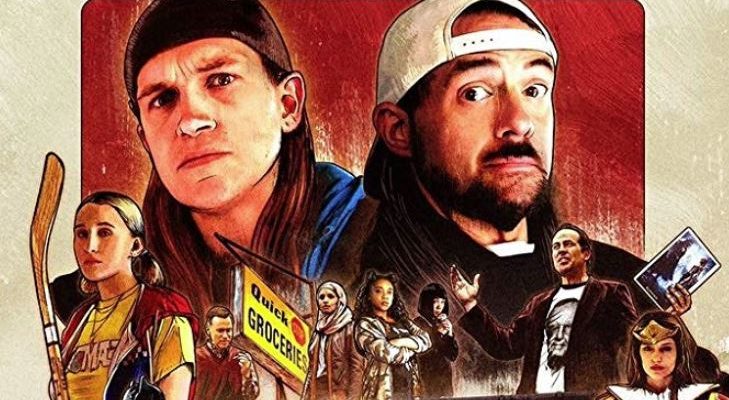 JAY & SILENT BOB REBOOT won’t win Kevin Smith any new fans but those already devoted to Smith’s style of stoner comedy will find enough laughs and emotional payoffs to make this one worth their time.

Plot: The stoner icons who first hit the screen 25 years ago in CLERKS are back! When Jay and Silent Bob discover that Hollywood is rebooting an old movie based on them, the clueless duo embark on another cross-country mission to stop it all over again!

Review: Kevin Smith follows his heart when making films. This has led him to have a wildly inconsistent filmography. Sometimes, he gives us an unlikely winner such as DOGMA and then other times it’s a bizarre misfire like his last film, YOGA HOSERS. Every time though, they feel like only movies that Smith could create. His big heart, hiding behind an immature sense of humor shines through no matter how good or bad the final product is.

That is still the case with his latest film, JAY & SILENT BOB REBOOT, which falls somewhere in the middle of his filmography when it comes to quality. This one, which came together after Smith nearly died from a heart attack in 2018, finds him returning to his “View Askew” universe of interconnected stories about New Jersey slackers for the first time in nearly 20 years. The plot (which is Inconsequential at best) finds Smith and long-time friend Jason Mewes, returning as the titular stoners, Jay and Silent Bob, trying to stop a big-budget reboot of a comic book film based on their lives. Along the way to their destination, they reconnect with several “View Askew” alumni and discover new familial connections, while engaging in amusing, if slightly tired hijinks.

JAY & SILENT BOB REBOOT is Smith nostalgically looking back at his early films while reflecting on how real-life fatherhood has changed both Mewes and himself. The biggest problem with that is though, the nostalgia is the driving factor. The film is more concerned with parading familiar faces by for a quick inside joke than it is with exploring the emotional impact of being a dad. It’s a shame because while some of the old references and inside jokes land really well (it’s heartwarming to see Smith and Ben Affleck reunite, for example), the more dramatic elements are clearly the film’s strength. I would have much rather seen more of Jay & Bob coming to terms with being middle-aged and their lives changing than watching them recycle their old material to a lesser effect.

From a structural standpoint, the film is pretty messy. Scenes run too long and others feel a bit pointless but the actors make it work, especially Smith’s real-life daughter, Harley Quinn Smith, who turns in a fun performance as “Milly”, a young girl who tags along with Jay and Bob on their journey to Hollywood. It may have been born out of nepotism, but her presence is one of the film’s biggest highlights.

Visually, the film is surprisingly strong. Smith’s directing is more dynamic than you would expect, and it gives the film a real energy that his early films sometimes lacked. He often likes to joke that he has no visual style other than pointing the camera directly at the actors talking but here Smith shows that he has learned from all his years behind the camera. When you couple that with beautiful cinematography from Yaron Levy, a veteran of many low budgets films (UNIVERSAL SOLDIER: DAY OF RECKONING) and cable TV series (USA Network’s THE PURGE) that look far better than they should, you have what is Smith’s most impressive looking film to date.

it’s clear everyone was having a good time catching up with old friends while making JAY & SILENT BOB REBOOT. If you are a fan of Smith’s older work, like I am, then you’ll probably have a good time too. You’ll also get a little emotional because you can feel Kevin Smith’s heart swelling with pride as he lovingly captures all his friends and family onscreen again. Anyone else though will be stuck wondering why you are getting choked up over a film with so many silly dick jokes.