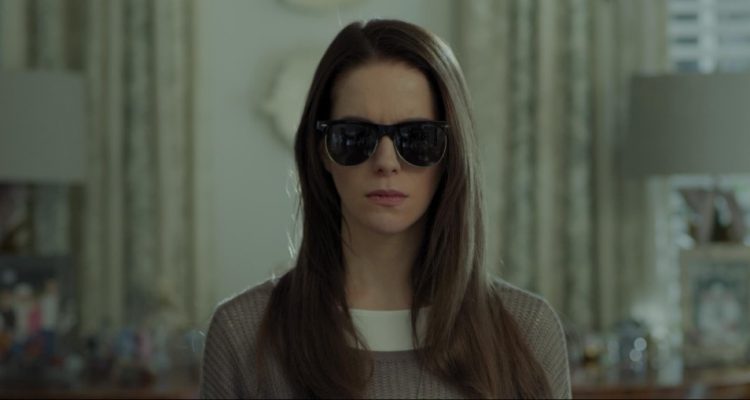 Zimbabwe-born actress Valerie Jane Parker, seen recently in the Wrong Turn reboot, gives us the 411 on her starring role in THE VOICES – On Demand April 2.

Now before we get onto THE VOICES, I have to ask – having recently seen you in a couple of other genre films – are you generally a fan of horror?

What appealed to you about WRONG TURN – which, I thought, was a really clever ‘reboot’!

Getting to be a part of such a legendary franchise, like WRONG TURN, is such an honor. Especially for a horror fan. So I was initially excited to be a part of that legacy. But working with Mike P. Nelson was the real treat. He’s such a creative director with a really open & free spirit on set. It’s rare that you meet someone who wants to take risks & play! Mike’s all about playing and switching it up, which I think reflects in the final product. It was a fun, new take on the franchise, and the energy on set was fun & dynamic.

Which was shot first, WRONG TURN or THE VOICES?

The Voices! I actually had no idea that they’d be released back-to-back like this. But Covid definitely interfered with everyone’s release timelines.

You’ve worked your way up to lead roles fairly quickly – do you attribute that to any particular part or movie?

I did a short film a few years ago called Love, Gwen. It’s a challenging to watch in terms of subject matter– I play a cop who’s trying to rescue her heroine-addict sister from prostitution. (Not for the faint of heart!) The director, Amanda Young, really took a chance casting me in that role. I don’t fit the typical “cop” look. But she believed in me. That film really opened a lot of doors for me in terms of allowing me to show off range and shake stereotype. (From it, I secured my phenomenal agent.) But the real truth is that there’s rarely ‘one’ big role that makes any career– it’s a series of steps. Just don’t give up.

How did you get involved in THE VOICES?

By being a hustler! Only *somewhat* kidding. I was first presented the script and was really drawn to the beauty of Lilly’s spirit. I knew I felt a connection there. But from there, it was a series of auditions, callbacks, and chemistry reads. It lasted several months, sometimes with an entire month or more passing between each round. I just kept believing.

Tell us what Nathaniel Nuon brings to the movie?

The movie reflects Nathaniel’s spirit. Not only did he write the script, but he meticulously planned every shot, every detail of the film. I’ve never seen anything like. Every single shot was planned. Such a gift, so much love and intention poured into every moment. No shots are incidental, nothing is wasted. As an actor, it’s such a gift to work in a space like that. You feel protected by the safe space he has created. It’s a lovely gift for the crew too. Everyone works in tandem.

What kind of direction did he give you for your character?

Slow down! I honestly think that’s the only big note I got. Considering that he had such a strong vision going in, I am extremely grateful that Nathaniel (or Sith, as his friends call him) was so open to letting me bring Lilly to light in my own way. I had already been working on her character for several weeks before we actually filmed, and there were rare times we didn’t envision a scene in the same way. Sith, as a director, is like the water. He’s adaptable, refreshing, and will mirror back to you what you need to see.

I’ve got another feature, No Time to Run, currently in post-production. And there *may* be another horror feature in the near future timeline…