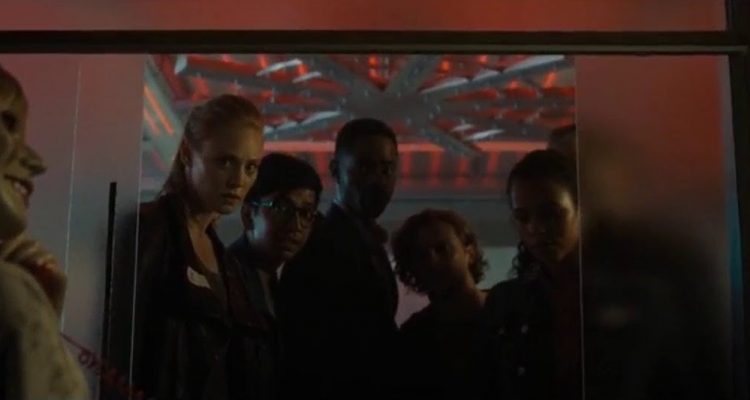 Escape Room has some thrilling moments, but the storyline becomes more ludicrous as it progresses to its train wreck of an ending.

Plot: Six people volunteer to play a series of escape rooms with a $10,000 prize if they solve the puzzles, but things turn serious when they realize the rooms are lethal.

Review: As a person who has played multiple escape rooms, I was curious to see how Hollywood would do a storyline involving the popular social activity (and in true Hollywood fashion, they rushed to get movies out involving escape rooms as quickly as possible — this is the second movie named Escape Room – there was another horror entry in 2017). You would think that escape rooms would probably be ripe for the horror genre, probably involving the rooms killing people. Well, this is that concept come to life, and in doing so, you realize the inherent problems with the idea.

Ultimately, Escape Room takes the concept of leaps of faith and abuses it. You have the generic group of people – the overachiever, the shy one, the enthusiast, the one who has never heard of escape rooms, etc. They move from room-to-room, losing at least one member per room (except for the first one) – it’s very predictable and standard. Of course, there are ridiculously complex situations that you would believe that human beings would take years to conceptualize, never mind build. The players seem able to figure out problems and puzzles ludicrously quickly, which, if you’ve ever played an escape room, would not happen.

The ending, though, is in a class of its own. It’s the same problem I had with the movie Hostel, where they tried to say that this ongoing business would result in the death of everyday people, which you know would ultimately result in the cops knocking down the door. Add in a miraculous disappearing act and the suggestion that the shadowy people behind the escape rooms have the ability to crash planes (!!!!!), and you have an out-and-out fantasy that does not have even a passing relationship with reality.

That’s not to say the movie is a complete loss.  The actors all do really well, and the lead female actor, played by Taylor Russell, is particularly likeable and relatable. There are also some genuine thrills with the cast trying to avoid the myriad of traps in the respective rooms, so the flick does have some entertainment value.

So, that, in a nutshell, is Escape Room.  If you like having nail-biting escapes and continuously far-fetched scenarios, then this is the movie for you. If you want your fare to be a little more believable, though, avoid this one at all costs.