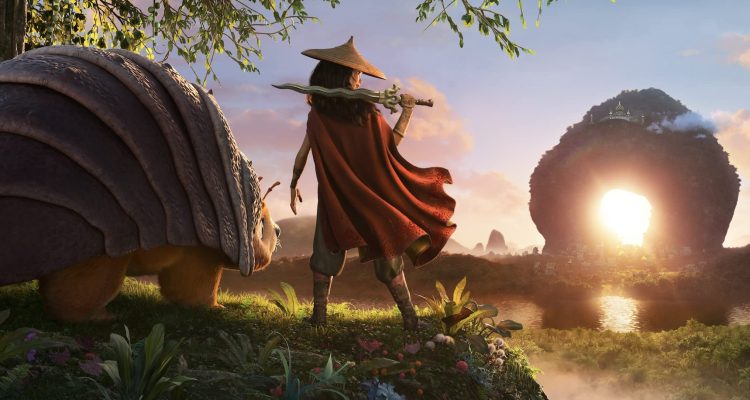 Raya and the Last Dragon is visually stunning and packed with fun characters and regular action scenes making it the perfect escape from reality we all need just now.

Plot: “Raya and the Last Dragon” takes us on an exciting, epic journey to the fantasy world of Kumandra, where humans and dragons lived together long ago in harmony. But when an evil force threatened the land, the dragons sacrificed themselves to save humanity. Now, 500 years later, that same evil has returned and it’s up to a lone warrior, Raya, to track down the legendary last dragon to restore the fractured land and its divided people. However, along her journey, she’ll learn that it’ll take more than a dragon to save the world—it’s going to take trust and teamwork as well.

Review: Raya and the Last Dragon is the latest animated feature from Disney and although it is aimed primarily at young girls there is something for the whole family to enjoy with its stunning visuals and regular action scenes.

It’s nice to see Kelly Marie Tran in a lead role after The Last Jedi backlash and she gives Raya some real personality coming off as strong but at times overconfident and unwilling to trust after she is betrayed by someone she thought was her friend. Her personal journey throughout this movie is to learn to believe in people again while as Raya’s nemesis Namaari (Gemma Chan) needs to find redemption. It feels pertinent with the times we live in as everyone seems to have lost faith in each other.

Awkwafina voices the dragon, Sisu providing the majority of the film’s humour although personally I thought the baby con artist stole the show alongside Benedict Wong.

James Newton Howard is one of the most under appreciated composers working today and he once again creates a score that adds to the film’s sense of wonder at times sounding like the music from Avatar. It matches the visuals perfectly and is a definite highlight; thankfully there are no songs so this isn’t a musical.

Raya and the Last Dragon is well paced and although the tone is light there is still some heart and the story has a few twists and turns. It very much feels like a Disney movie following a familiar formula especially with the cute sidekick but as they say if it ain’t broke, don’t fix it.

Overall, Raya and the Last Dragon has some beautiful visuals and a spectacular music score; it’s packed with action and thrills for the whole family. The characters are memorable with some nice touches of humour and a positive message making for an entertaining watch.