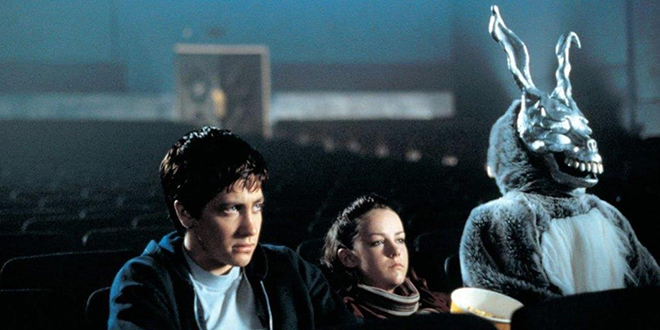 If Donnie Darko holds a special place in your heart, then Arrow’s new release of it is the ultimate gift.

Plot: A troubled teenager is plagued by visions of a man in a large rabbit suit who manipulates him to commit a series of crimes, after he narrowly escapes a bizarre accident.

Review: A burgeoning paranoid schizophrenic teenager named Donnie Darko (vividly realized by Jake Gyllenhaal) sleepwalks and has paralyzing visions of a horrific looking man-sized rabbit he calls Frank. Frank explains to him over the course of the month of October in 1988 (when the film is set) that the world will end and to prepare for a revelation. Donnie comes from an upper middle class conservative family in a New England town and his mother (superbly portrayed by Mary McDonnell) is doing her best to give him the love and space he needs to adjust to his alarming condition. At night, when the world is asleep, Donnie’s “friend” Frank leads him on an odyssey that has him committing crimes, discovering that time travel is possible, and exploring the reaches of what might very well be a wormhole in reality. When a jet engine crashes through his room, his world takes a curious turn as he comes to realize that he has a fate and a destiny that he can expect from afar. The world and the people around him (which include a new girlfriend, a selection of teachers who regard him with vastly differing opinions, and even a motivational speaker in town who has a dark secret) are all somehow connected to Donnie’s extraordinary journey to the impossible.

When Donnie Darko was theatrically released in 2001, it went largely unnoticed, but gradually it found its audience on home video where it flourished and even spawned a direct-to-video sequel. I knew when I originally saw it theatrically that it was a special film, and even when it was released again in a director’s cut version, the movie has impact and transcends cult status. It should have launched writer/director Richard Kelly into the stratosphere, but thus far he’s kept a cult-level profile, only directing two other films since. His work on Donnie Darko is radical and powerful, and it has lasted the test of time and should remain one of the most critically underrated movies of the new millennium. His treatment of teens, the adults who regard them, and the world around them is strikingly conveyed on screen, and it lingers long after the film has played out.

Arrow Video has given Donnie Darko the royal treatment with an impressive deluxe packaged edition. It has four discs, including the Blu-rays and DVDs of both the theatrical cut and the director’s version, a fold-out, double-sided poster, postcards, and a plethora of bonus features, both newly produced and archival. There are hours’ worth of bonus features, and a hardcover book with essays that is also included. If Donnie Darko holds a special place in your heart, then Arrow’s new release of it is the ultimate gift.