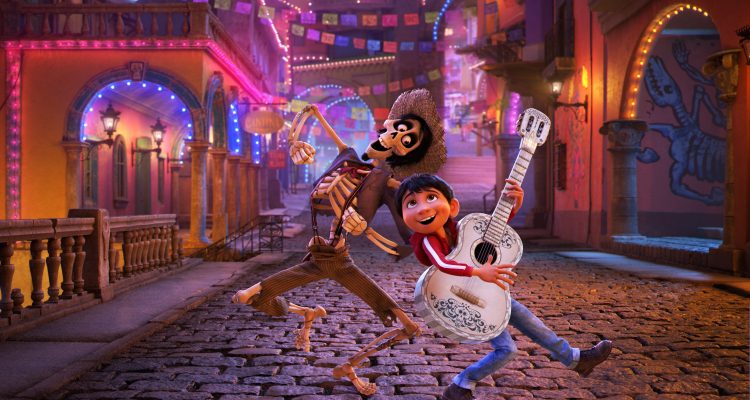 Coco is a brilliant, visual delight that really captures the imagination. It isn’t just a movie for kids, it’s definitely a movie for everyone.

Plot: Despite his family’s generations-old ban on music, young Miguel dreams of becoming an accomplished musician like his idol Ernesto de la Cruz. Desperate to prove his talent, Miguel finds himself in the stunning and colorful Land of the Dead. After meeting a charming trickster named Hector, the two new friends embark on an extraordinary journey to unlock the real story behind Miguel’s family history.

Review: When I first saw the trailer for Disney’s new movie Coco, I instantly started comparing it to the movie The Book of Life. Both movies centre around the Day of the Dead and music. But I was pleasantly surprised how much I really enjoyed Coco.

The story follows a boy named Miguel, who loves music, but is banned from indulging in anything musical due to his family. Miguel finds a photo of a man holding a famous guitar, whom he believes is his grandfather, which sets the movie into motion.

Coco is a fantastic addition to the Disney Pixar brand. I couldn’t believe some of the imagery I was seeing on screen. The colours, the graphics, they all felt so lifelike. The imagery just looked like it was ripped right out of a photography book; they are some of the most stunning visuals in an animated movie to date.

Another impressive feature in this movie is the music. Beautiful melodies that will fill your heart with joy. I loved how the movie revolves around music. Usually in Disney movies the music is just forced in, but the music felt so organic which made it even more enjoyable.

Prior to the movie, one of the animators on Coco, showed us the some of the processes that goes into a scene, and I was blown away. One scene in particular was of Miguel playing the guitar. It stands out because they actually recorded someone playing the song on the guitar and recreated it in the movie, so in that scene, Miguel is actually playing the correct keys on the guitar. Colour me impressed.

One thing I love about Disney Pixar movies is there is always a lesson to the stories, and Coco isn’t an exception. The one core theme that I got out of this movie is that your family is your family, regardless of what happens. The movie really centres around family and the traditions each family passes on among generations, and I enjoyed it.

The only criticism I have with this movie is the topic of murder. This is a kid’s movie, so the discussion of murder and killing could be a little more mature for Disney’s kid friendly audiences. But, we are talking about a movie that centers around the Day of the Dead, so I guess you’re kind of asking for that sort of discussion, right?