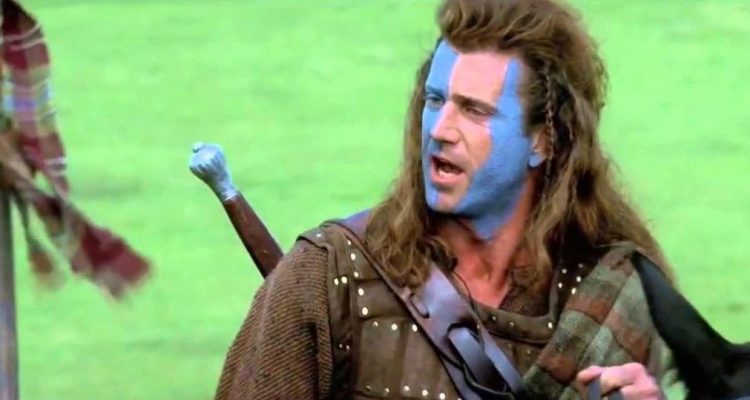 Braveheart is an obviously well-made film with stunning cinematography and top-notch battle scenes.

Plot: William Wallace (Mel Gibson) leads a group of proud Scottish fighters to rise up and oppose the tyrannical rule of Edward I (Patrick McGoohan).

Review: Though this movie came out in 1995 when I was at the apex of my theatre-going, and it won the Best Picture award at the Oscars when I still gave a damn about that awards show, this is my first viewing of Braveheart. That’s partly because of my ongoing allergic reaction to anything the critics fawn over, and the other part is my life-long cynicism about movies based on real-life events.

Watching it now, I can appreciate the film – yes, it’s rife with what are considered historical inaccuracies (which I can’t comment on, as last time I looked, I wasn’t around in the 13th or 14th century, so I don’t know what passes for truth and what doesn’t at that time), but I’ve grown to look past movies “based on actual events” – that doesn’t mean the film is a fucking documentary. If you see a biopic based on a real-life person, consider it to be dramatized (meaning the filmmakers made stuff up to make it more interesting).

What the movie is, is visually stunning. Braveheart was shot in both Scotland and England, and the landscape looks breathtaking – having grown up in an urban centre where I only see green in parks, I always appreciate how beautiful nature can be – even though I can’t stand being in actual nature for too long.  Gibson needs to get in all those shots of the environment because it’s that same land his character is fighting over – so kudos to him for his expert craftsmanship. I especially love the scene with him on top of the mountain, looking out at the vast valley.

The score is terrific (James Horner did it, so expect no less), and the fight scenes are impressive (including the famous one with Gibson’s Wallace rousing the troops with his “Freedom” speech). The battle scenes are brutal and violent, which is what battle scenes should be – war is hell, and we need to be reminded of that every time we see one.

As for the acting – Gibson is fine in the lead role, though his Scottish accent seems to come and go like the wind. He does have a natural screen presence and is believable as a leader. Patrick McGoohan is excellent as Edward I and brings all the requisite menace and stern looks that you would expect. My favourites, though, were Angus MacFayden (as Robert the Bruce), Brendan Gleeson, and David O’Hara. MacFayden has always been underrated, in my opinion, and he has the most complex character of Robert, and he plays the conflicted morality of the role so well. Gleeson is unabashedly fun as Hamish, Wallace’s childhood friend and right-hand man. O’Hara is delightfully unhinged, though remarkably loyal as Stephen of Ireland.

With a runtime of under 3 hours, I’m sure there could have been some editing here and there to make it a more efficient viewing experience, but these types of movies tend to run a little longer and to be fair, I was never bored in the film. That being said, if you’re a busy person who has very little time to sit down and watch a flick, be warned.

Overall, Braveheart was a very satisfying film. While you have to take the entire thing with a grain of salt and Gibson’s erratic accent makes it hard to believe that he’s Scottish, there is enough blood, battle, drama, and uplifting moments to keep you engaged.