Volume Two of The American Horror Project is a highly valuable foray into regional American horror filmmaking, and while all three titles in this set are wildly different from each other, they are each a quite a trip and extremely creepy in their own right.

Plot: In a surrealistic horror setting, a young Preacher’s assistant goes mad and becomes lost in a fantasy of her own creation.

Review: An orphan named Grace is adopted by a church, and over the years the church dwindles and devolves into a travelling tent show. Grace (played as an adult by Brooke Mills) has become a beautiful woman and the Reverend (Michael Pataki) uses her as a sideshow attraction in a high dive act that serves as the climax to his fire and brimstone sermon. Grace is engaged to a young doctor in town (played by Paul Prokop), but she remains a virgin. Her one true desire is to find her long-lost father, and one day she gets wind of where her old man might be – living in a dumpy hotel that serves as a whorehouse. When she gets there, she is told by a skeezy undertaker / pimp that her father died the previous night, and it is at this point that Grace’s psyche shatters. Her father (played by Edmond O’Brien) rises from the dead, and she allows him to move in with her and the Reverend, which causes quite a bit of strife in the household, not particularly because they’re squatting in an abandoned farmhouse off the country road. When the Reverend is murdered (evidently by Grace’s father), police come calling and pay the price when Grace goes off the rails and kills them for snooping around. It’s up to Grace’s fiancé to save her from her own psychosis, but will he get there in time to stop her from killing again?

A strange, understated chiller from director John Hayes, Dream No Evil is similar in theme to Hitchcock’s Psycho, but it creates its own eerie mood and tone. It doesn’t shake your universe or reinvent the wheel, and yet it feels quite unique. You get a real sense of loneliness and desolation while watching it.

Arrow’s Blu-ray edition is presented in a new 2K restoration, and includes a new audio commentary, a newly filmed video appreciation of the film, as well as a new video essay on Hayes’ work, and more.

Plot: A man accidentally runs down a young girl and has a curse placed on him by the girl’s father, an occultist. He goes to a spiritualist for help in fighting the curse.

Review: Sal (J.J. Barry), an artist from the big city, moves into a small town with his art gallery-owing girlfriend, to set up his workshop. Not long after, he accidentally runs a little girl over with his car, killing her. Months pass, and he begins to feel haunted and cursed by the event, namely because we know the girl’s grandfather is using witchcraft to hex him. But on top of that, he is hounded by a cloaked figure that might be death itself, coming to claim his soul. With the help of some friends, Sal, who’s verging on a nervous breakdown, seeks the help of a spiritualist (played by Kim Hunter), who helps him see that there’s a way to break the curse upon him.

An intimate chiller from director Martin Goldman, Dark August works pretty well as independent horror-lite adult fare, and Barry really sells his cluelessness to how his character would react to such a fate. The film has a nice, authentic regional flare (it was filmed entirely in Vermont), and seems to have settled itself with its surroundings quite well. It ends on a decidedly unusual note, giving me pause and a considerable amount of confusion, but that’s the sort of movie this tries to be. It sets you up for some shocks and then just leaves you there, stunned.

Arrow Video presents their new blu ray of Dark August in a brand new 2K restoration, adding a new audio commentary, newly filmed appreciations, new interviews, and much more. The insert booklet in the box set it comes in has a really interesting essay about the film; it’s highly recommended reading if you enjoyed the movie.

Plot: A young nanny discovers a horrifying reality about her new ward who may have the power to control the undead.

Review: A young nanny named Alicianne (Laurel Barnett) arrives on the spooky woodland estate of a strange family who needs their odd daughter Rosalie (Rosalie Cole) looked after. Alicianne soon discovers that the weird goings-on in the woods (like dogs disappearing or the occasional missing person) are directly related to Rosalie’s unusual psychosis that may prove that the child has homicide at heart. It doesn’t take but a day or two for Alicianne to become the center of Rosalie’s fixation: ghastly zombie-like creatures come to claim her, but with the help of Rosalie’s older brother, Alicianne will have to fight for her life as The Child zeroes in on her.

The Child is a fever dream of a horror movie. It has stilted, unnatural dialogue delivered by non-actors, written and directed by non-professional aspiring filmmakers, but by the finale it has delivered some pretty strong shocks and some doozy gore scenes. It ends up being a very unique viewing experience, and so it deserves to be tracked down and seen. There are plenty of killer kid movies, but The Child ends up feeling like a hybridized version of stuff like Night of the Living Dead, The Bad Seed, and The Texas Chainsaw Massacre, but completely dissimilar to those. Director Robert Voskanian never directed another feature again.

Arrow Video presents this film in a 2K restoration, and offers two different aspect ratios for it. There’s a new audio commentary by the director (wow!), plus a new filmed video appreciation, featurettes, and more.

All said and done, Volume Two of The American Horror Project is a highly valuable foray into regional American horror filmmaking, and while all three titles in this set are wildly different from each other, they are each a quite a trip and extremely creepy in their own right. 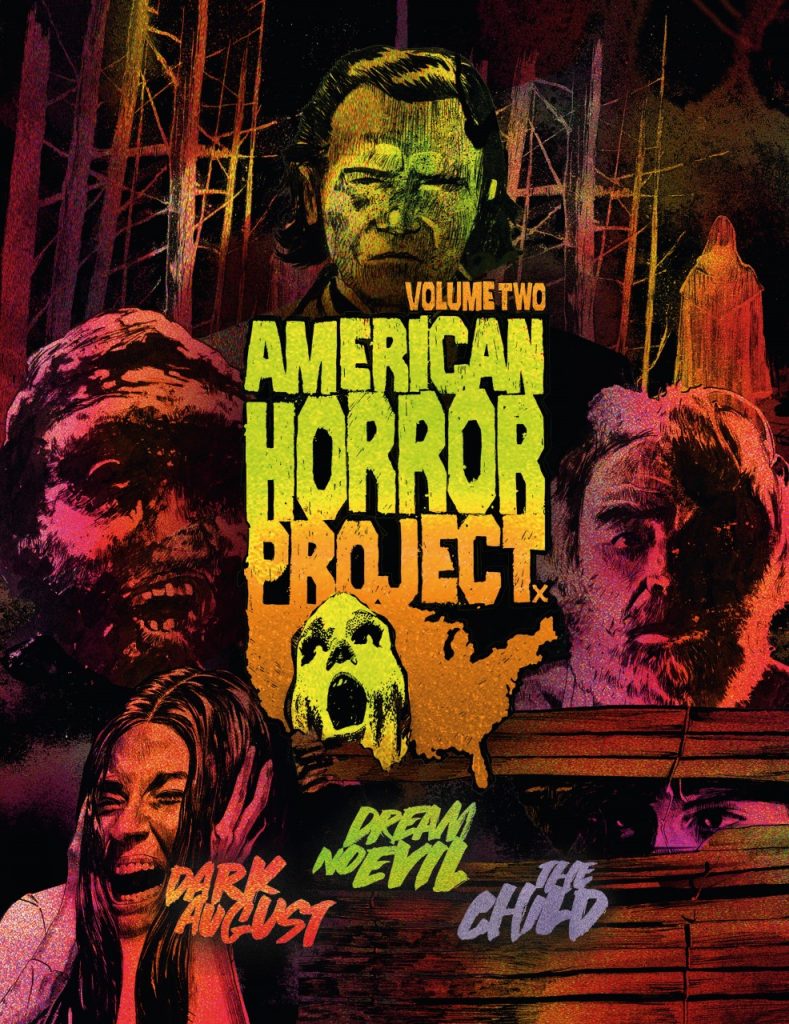