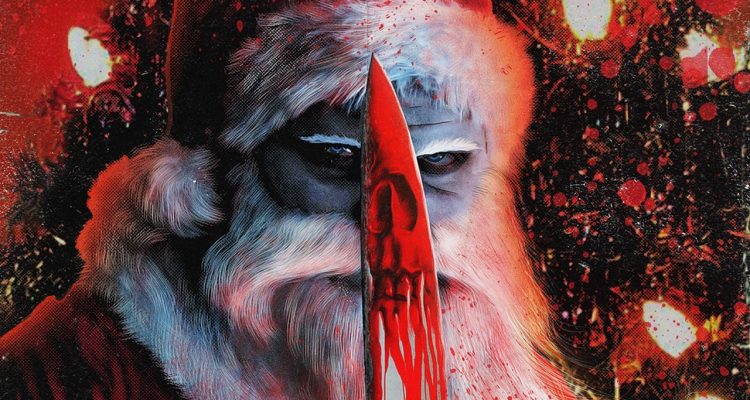 Despite some patchy acting 13 Slays Till X-Mas is a welcome addition to the ever growing seasonal horror genre with some fun stories, lots of Easter eggs to classic horror flicks and a high bodycount. What more do you need?

Plot: On December 24th, five seemingly random men are invited to a dive bar by a mysterious e-mail. They decide to pass the time by resurrecting the old tradition of telling scary stories on Christmas Eve. As each take turns spinning yarns of yuletide terror, it becomes evident, they may be harboring a dark and deadly secret.

Review: I’ve always enjoyed horror anthologies and 13 Slays Till X-Mas is filled with yuletide slaughter for all the family.

I rarely find these sorts of films scary but there is a sense of fun and buckets of blood to add to the atmosphere.

I’ll admit a lot of the acting is questionable and this doesn’t have a huge budget but when you think about it, Halloween was terribly acted and had no budget and we all love it so I foresee this becoming a Christmas horror classic in the years to come.

I spent the majority of the movie looking for all the horror Easter Eggs (even though it’s set at Christmas) and there are all kinds of references to the likes of John Carpenter, Fulci, Bava, Final Destination, Wes Craven and more.

Producer/director P J Starks makes an appearance and has arguably my favourite line of dialogue from the entire movie.

Each of the 13 tales is short and some are better than others with particular highlights being Dead Air, Killer Caribou and one set in an insane asylum (which I don’t know the name of) but there is something to enjoy in the majority of tales. The brisk pacing keeps you engaged so even if you don’t like certain stories they are usually over pretty quickly and you can move on to the next.

I feel I should mention that any anthology that contains a vengeful killer Christmas Tree is a must-see in my book. Also is it weird that I’ve always wanted to see someone get killed by a stool in a horror movie? Well this movie fulfils that need and now I can go seek the therapy I clearly need.

Overall, 13 Slays Till X-Mas is a lot of fun with several enjoyable stories that aren’t afraid to get rather messed up and dark. Some of the acting is a bit amateurish but that’s the case with most horror movies so don’t let that put you off. Maybe if you’re good this year Santa will leave a Blu-ray in your stocking…