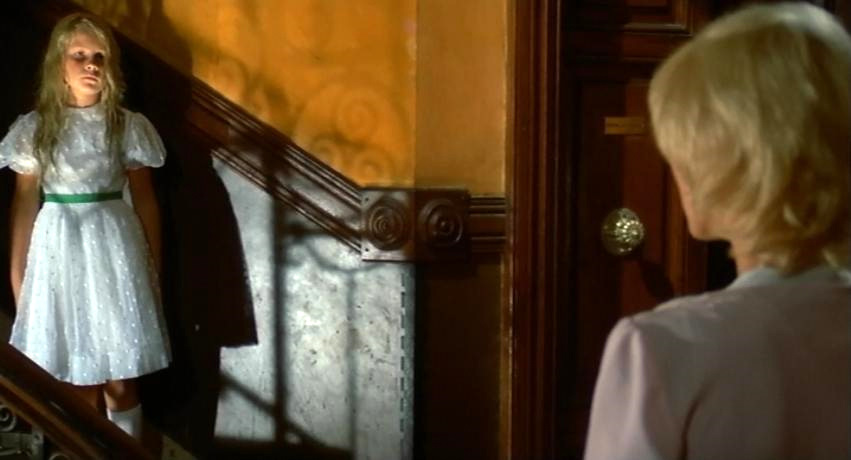 Fans of giallos and creepy horror should like it but the Blu-ray is disappointing.

Plot: Sylvia, an industrial scientist, is troubled by strange hallucinations related to the tragic suicide of her mother.

Review: Seemingly from one day to the next, a chemist named Sylvia (Mimsy Farmer) starts having startlingly creepy visions of a woman in black applying perfume, but that vision is compounded by other much more invasive visions of violence. Strangers she crosses paths with begin following her, and she can’t maintain relationships with anyone because suddenly her imagination (or her mental illness) runs wild as she sees them perpetrating horribly violent acts. She begins having an odd, foreboding relationship with a little girl who might very well be a past version of herself, and slowly but surely Sylvia descends into madness and finally a doom she cannot escape as her visions turn out to be her own personal hell.

A supernatural giallo-type film from Italy, The Perfume of the Lady in Black has a slow start, but ends up in an intriguing place by the end that leaves you creeped out and unsettled. There’s some interesting plot developments and some weird sexuality and gore, so fans of the genre will get what they’re looking for. From director Francesco Barilli.

Raro Video has just released a Blu-ray edition of The Perfume of the Lady in Black, and while I’ve enjoyed and appreciated some of Raro’s blu ray upgrades (Hitch Hike was one), their presentation for this film leaves some things to be desired. The high definition upgrade is a little murky and fuzzy when it should be crisp, filmic, and clear, but their packaging, as always, is excellent. There are some special features, including an on-camera interview with the director, and a short film, as well as an insert booklet. If the “digitally restored and remastered” aspect of the presentation were better, I’d give this review a higher rating.