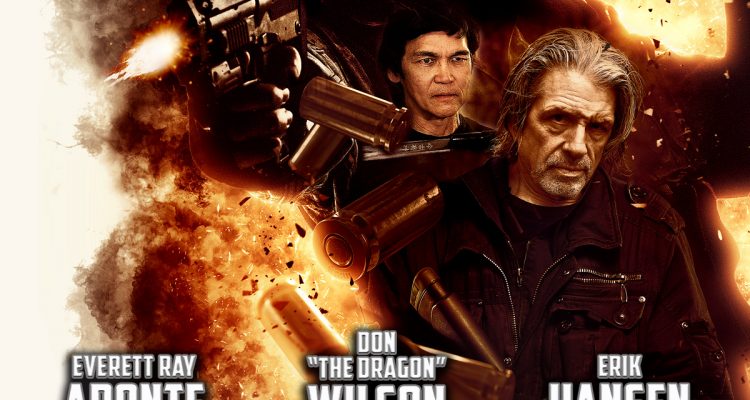 “It’s a reminder to never show mercy.  You won’t be thanked for it.”

Erik Hansen (Snowblind, The Countess) and Everett Ray Aponte (Slender Man, Atomic Eden) star in The Hitman Agency, an action thriller is written and directed by Dominik Starck (Atomic Eden, Iron Wolf), who also appears onscreen as a younger version of the grizzled, mature protagonist.  Former professional assassin Joseph (Hansen), once presumed dead by his old employer, is hunted down and successfully captured by the agency’s younger replacement for Joseph, Lucas Kane (Aponte), shortly after Kane is shown single-handedly pulling off a dangerous, action packed assassination within another organization’s compound full of guards and scantily clad women.  While held captive and seemingly resigned to his demise, Joseph and Lucas have a dialogue heavy exchange detailing the former’s history with the agency, his origins and relationship with key figures within agency hierarchy, illustrated primarily via multiple flashbacks to Joseph’s younger self, portrayed by director Dominik Starck.  There is even a brief appearance from action legend Don “The Dragon” Wilson (the Bloodfist series).  The past engages with the future in some expected and unexpected ways, full of plot twists, intrigue, betrayal and a good bit of violence.

The Hitman Agency is primarily story driven, and it keeps you interested throughout, but it is not without its problems.  The low lit indoor scenes between Hansen and Aponte are, ironically, the highlight of the film, their exchanges indicative of the “old lion vs the young cub” concept, and their individual scenes apart from each other have some clever exchanges with other characters.  The pacing of the scenes and the jumps from present to past do well in explaining how we got to where we are in the movie without coming off as confusing.  The twists make sense without being overwhelming, or just being there to keep the viewer guessing, an all too familiar novelty that is thankfully kept to a minimum here.  However, many of the scenes filmed elsewhere from our two main characters tend to fall in rather drab environments such as mundanely lit offices or cloudy fields, with flat camera angles doing little to put an exclamation point on any of the decently paced choreography.  Hansen and Aponte are clearly the strongest two presences onscreen, with some other actors coming off rather stiff, but the scenes with Starck as the younger Joseph do well in carrying things where they matter most, and you can tell he cares a great deal about treating this story and his characters seriously.  It would have been nice to see a little more of Aponte via scenes detailing his own background, as well as a more coherent and complete story element and character development for Don Wilson.  The few violent blood effects are nothing fancy, but do not look overly fake or distracting while adding some additional gravitas to any given scenes.  The Marvin Hartman score is a major highlight, the music adding quite a bit to the more gripping scenes, and is always appropriate for the characters and environments.  The overall result is such that The Hitman Agency is quite entertaining and enjoyable as an overall movie with the action as a bonus, rather than relying on the action as a crutch.  Anybody who appreciates a good story and sympathetic characters will enjoy this every bit as much as a diehard action fan.  Starck’s devotion to the project is apparent, and the art of film should be graced by future efforts every bit as much as this one.  The Hitman Agency is an action thriller that puts layers of professional chemistry on top of each other, both as depicted onscreen and as elements to a story formula that works very well.