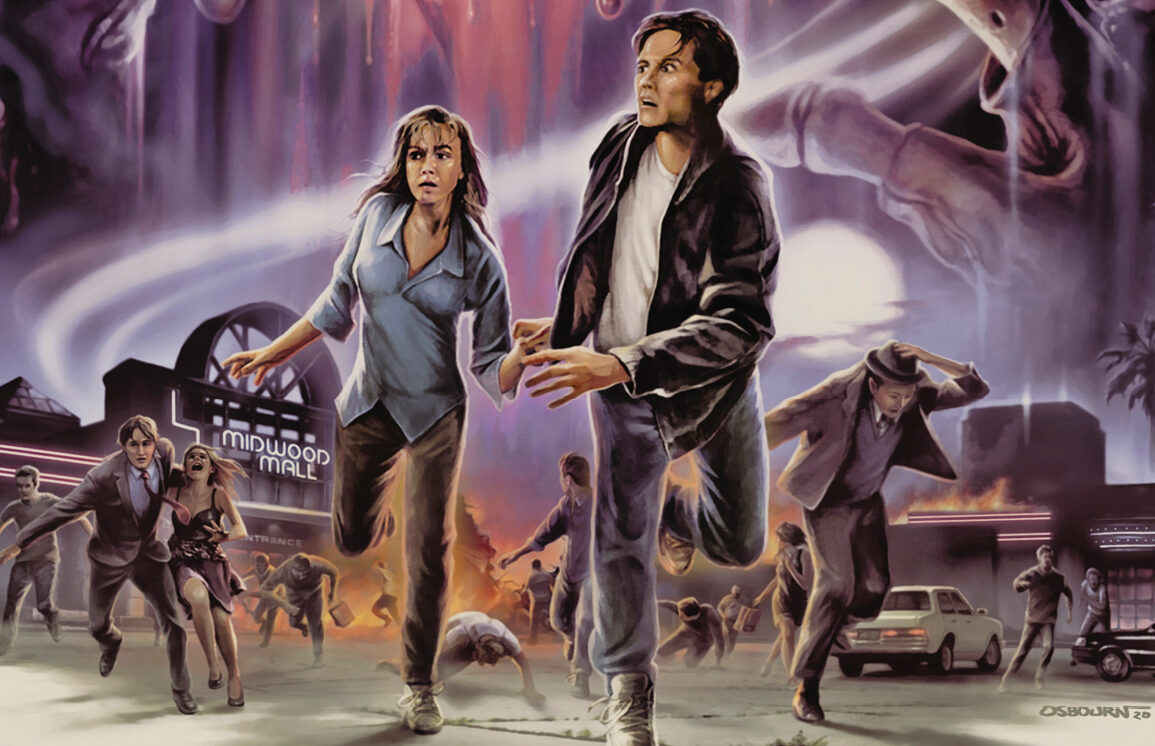 One of the last slashers of the 1980s, Phantom of the Mall: Eric’s Revenge (which I always thought was a sequel as I was growing up) is a fun time with a couple outlandish kills, some softly-lit love scene flashbacks with body double nudity, and a karate-proficient killer modeled after the Phantom of the Opera!

After a brand new mall opens, people turn up dead in grisly ways, and the mystery behind the killings points to a wronged man living in the shadows within the mall.

The Midwood Mall opens to a lot of fanfare in a Middle American town, and all signs point to a great, smashing success, but right away a masked, scarred maniac living within the dark pockets of the mall begins killing security guards and other people, leaving horribly maimed corpses for the mall’s owner to find. The owner is a corrupt scuzz bag named Posner (Jonathan Goldsmith) who not only cut corners to get his mall built where he built it, but he also cut short some lives in the process … including a handsome young man named Eric (Derek Rydall) who refused to accept a payout to move from his home where the mall was to be constructed. Eric is indeed the “phantom” living in the mall, and since the opening of the mall, he’s siphoned off some choice materials from the stores in the mall to build himself a cozy little haven in the darkness, including surveillance equipment, VCRs, a stereo, and lots of exercise equipment to stay in shape for his grand plan for revenge. Eric’s focus is his former girlfriend Melody (Kari Whitman) who works at a restaurant in the mall, and he spends every moment spying on her, leaving little gifts for her, and making sure no other man can have her. When a local reporter (played by Rob Estes) realizes that there’s a story here, he also gets close to Melody in the process, which could potentially spark major retribution from the phantom of the mall! With the clock ticking to a belated grand opening celebration, and with Eric becoming more unhinged by the day, Melody and her friends (including an ice cream scoop employee, played by Pauly Shore) scramble to survive Eric’s ultimate payback.

One of the last slashers of the 1980s, Phantom of the Mall: Eric’s Revenge (which I always thought was a sequel as I was growing up) is a fun time with a couple outlandish kills, some softly-lit love scene flashbacks with body double nudity, and a karate-proficient killer modeled after the Phantom of the Opera! The movie nicely evokes the era of the mall daze from the era, and while the film never reaches a zenith moment, it delivers exactly what it wants to. The perfect movie to pair with Chopping Mall (which is exactly the movie I saw this with at a double feature on 35mm a few years ago), Phantom of the Mall is a sleepover popcorn movie if ever there was one. From director Richard Friedman.

Arrow Video went way over the top with their release of this one. They’ve included three different versions of the movie (!), including the TV cut, the theatrical version, and a version that melds the two. The theatrical cut looks great in a 2K restoration, and fans of the film are treated to a new documentary about the making of the movie, plus commentaries, a fold-out poster, lobby cards, and much more. Incredible!