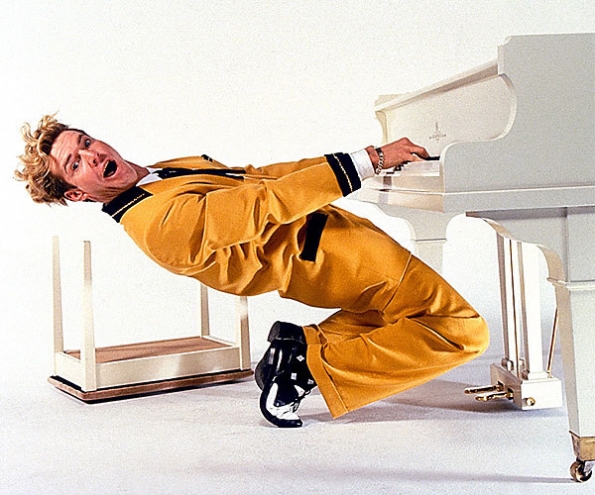 The sense of time and place is spot-on. You can’t beat the music. Unfortunately it only covers Jerry’s rise and fall, not his comeback. Some of the acting is broad, and the film has a loose style that isn’t realistic some of the time.

Review: Young Jerry Lee Lewis and his cousin Jimmy Swaggart are just kids when they witness southern soul music, and they have radically different opinions upon beholding the experience. Jimmy declares it “devil’s music” and runs off, while Jerry soaks it in and is transformed by it. Years later, Jerry (played by Dennis Quaid) has developed his talent for playing the piano, and his dream is to have a hit record during the dawning of rock and roll music and Elvis is the reigning king. His cousin Jimmy (Played by Alec Baldwin) is still harping on him about not turning to the devil’s music for fame, but Jerry is stubborn and determined to make it. After two failed marriages, Jerry goes to live with another cousin named J.W. (played by John Doe), whose 13-year old daughter Myra (Winona Ryder) has an immediate fixation of Jerry, who is flirtatious, talented, and a superstar in waiting. Jerry and J.W. convince Sam Phillips at Sun Records to let them cut a record, and suddenly Jerry’s single is on the radio and he becomes an overnight sensation. His next two singles – “Whole Lotta Shaking Going on” and “Great Balls of Fire” are smash hits, and Jerry and J.W. become wealthy and start touring the country. Meanwhile, Jerry’s frisky flirtations with Myra (whom he’s technically related to) gets serious and they elope, putting Jerry’s standing with J.W. and their record company in a precarious position as Jerry has married not only a child, but one he’s related to. This does not bode well for him on his first tour in England, which results in disaster as all of Britain turns against him and all but kicks him out of the country for being a cradle robber. Jerry returns home a disgrace, and his popularity plummets, setting the stage for the ruination of his career. It takes quite some time before he can recover and make a semblance of a comeback …

A loosey goosey biopic with some odd, surrealistic musical moments where suddenly everyone on screen is dancing (an odd, but stylistic touch), Great Balls of Fire! has a nice sense of time and place, and it’s fun watching Quaid overact in a broadly portrayed performance. Ryder actually gives the best performance in the film, and there were times when she had me laughing out loud. I’ve seen this movie three or four times over the years, and it still holds up well. You can’t beat the music.

From director Jim McBride, who also did The Big Easy with Quaid.

Olive Films is about to release this title on Blu-ray, and aside from some picture warbling at the beginning, the HD transfer looks good, if a little lacking in sharpness. No special features are included.