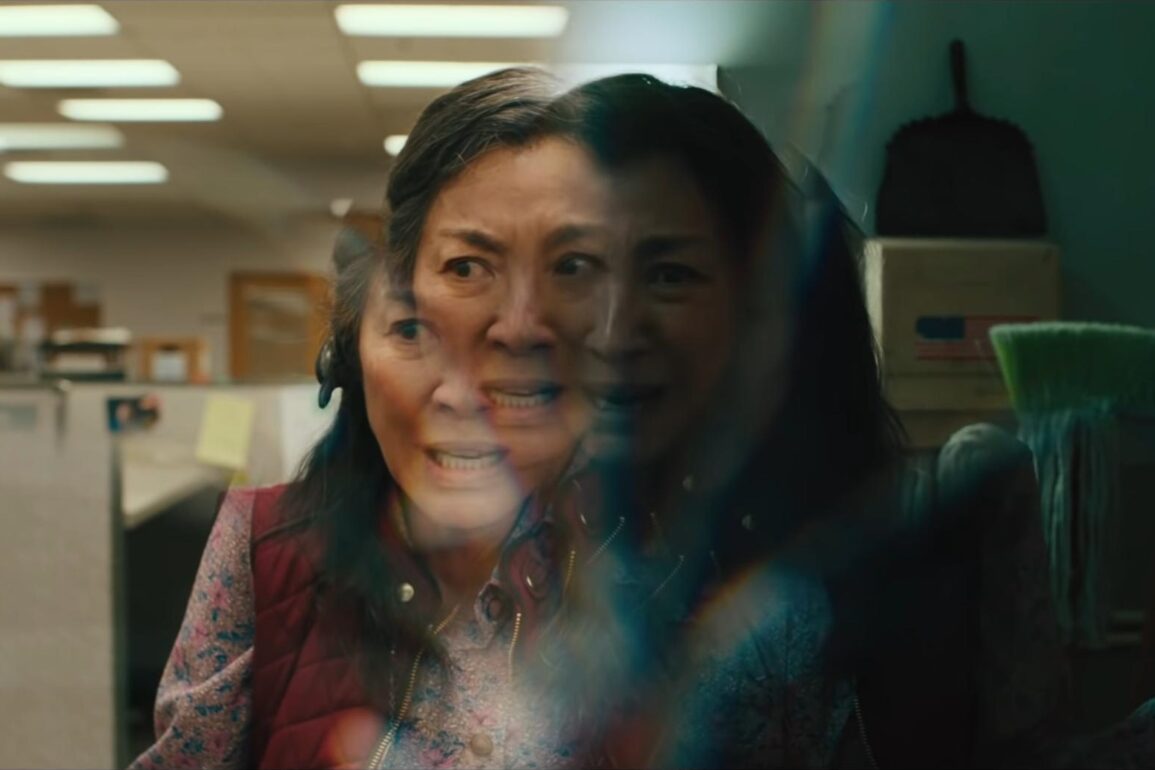 Everything Everywhere All at Once (2022) Review

This is definitely an acquired taste-type movie that will have its detractors and fans, but the highlight is Michelle Yeoh, who is given the opportunity to show she still kicks ass.

Plot: A laundromat owner (Michelle Yeoh) discovers that a parallel dimension version of her daughter (Stephanie Hsu) has created a black hole capable of destroying the Multiverse.

Review: When I first saw the trailer for this movie, I thought it looked interesting. That’s one word for it. This is definitely the weirdest movie I’ve seen in a long time. Watching it, I can see why the film critics dropped their collective pants for it – this movie defies convention and definition. I’ve heard it described as “absurdist,” which is probably the most accurate word you can use to define what you’ll be watching for 140 minutes. It’s just a wacky, silly movie that is maybe a little pretentious but also oddly fun.

The one thing I will say about it is, it seems like a lot of noise and spectacle for such a small payoff. The characters at the beginning live a somewhat humdrum existence, and despite all the colours and craziness throughout the movie, you realize when watching it that the payoff won’t be as spectacular as the journey. Maybe that’s the entire point of the film – it certainly flies in the face of every dark, nihilist Gen-Z trendy movie that is boring the hell out of modern audiences. For that alone, I thank this movie and its creators. The one question I have for anyone who watches it and adores it is, is this the type of movie you can watch more than once?

Michelle Yeoh is definitely a standout in the film. You get her awkward confusion about the events unfolding around her (as you will be as confused as she is), and there are some well-choreographed fight scenes sprinkled throughout that demonstrates how she still has the martial arts chops to put on a good show, even though she is approaching 60. Jamie Lee Curtis is a strange addition to the cast, and it’s surreal to see her with long hotdog fingers or as a vicious fighting machine. It’s also surreal to realize that the kid who played Short Round in Indiana Jones and the Temple of Doom and Data in Goonies is now old enough to play Michelle Yeoh’s husband – he did a great job in the role, though. Finally, James frickin’ Hong, 90 years of age, is still batting it out of the park and provides many of the comical moments in the film.

140 minutes is way too long for the story, though, especially when you can see the payoff coming a mile away. There’s a lot of zaniness throughout that could have been left on the floor. This movie is borderline incomprehensible, so it’s not like the additional twenty minutes or so would be missed, considering you’ll often not know what the hell you’re looking at, anyway. The soundtrack is non-descript, but at least you can clearly see the fights, and there’s no shakycam nonsense.

Overall, can I recommend this movie? I guess so, at least as a one-time-only viewing experience. If someone came up to me on the street and told me they either loved the movie or hated it, I would get both perspectives. I’m going to fall somewhere in the middle and say this movie is at least creative and unusual enough to probably rate above average. I don’t think it’s a masterpiece, and I don’t believe it’s a movie that I would want to watch again, but if you’re one of the many people complaining about everything being the same, then this is your ticket for almost 2 and a half hours of something completely new.