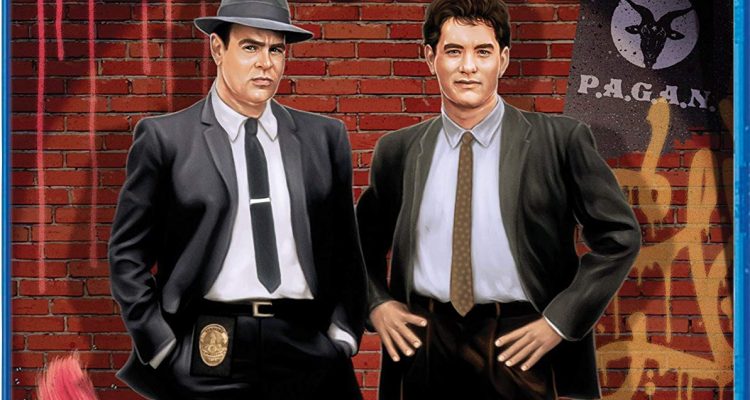 It came at the crux of the pop culture boom that celebrated Max Headroom, the buddy cop movie formula, and Saturday Night Live.

Plot: The equally straight-laced and “by the book” nephew of Joe Friday must work with his more laid-back partner to solve a mystery.

Review: The ’80s big screen reboot of the black and white Jack Webb TV series was a timely film: It came at the crux of the pop culture boom that celebrated Max Headroom, the buddy cop movie formula, and Saturday Night Live. Dan Aykroyd spearheaded this spoofy (but with a straight face) take on the cop procedural, and he stars as the tight assed nephew of the original Detective Joe Friday. He’s partnered with a looser, more relatable detective named Pep Streebek (Tom Hanks, a perfect foil for Aykroyd’s robotic, by the book character), and together they go undercover (as punks!) in a Los Angeles plagued with a Satanic Cult, hellbent on sacrificing virgins to a pagan deity. They go up against a troglodyte henchman (played by Jack O’Halloran) and a two-faced reverend (Christopher Plummer), who is behind it all. Friday falls in love (for the first time!), which screws with his hard wiring as a no-nonsense kind of guy, while his partner Streebek tries coping with the tough situation he finds himself in when Friday is forced to relinquish his badge after getting out of line. How are these two ever going to save Los Angeles?

Not really a laugh riot, but a time capsule of when movies of the ’80s were cross-pollinating with the 1950’s (think Back to the Future). The movie never completely succeeds, but I have fond memories of watching this movie on TV when I was a kid. It’s fun and light, and never goes completely off the rails like so many big-screen reboots of TV shows do nowadays (like CHIPS and BAYWATCH). Dragnet respects the source material and does something fresh with it. Directed by Tom Mankiewcz.