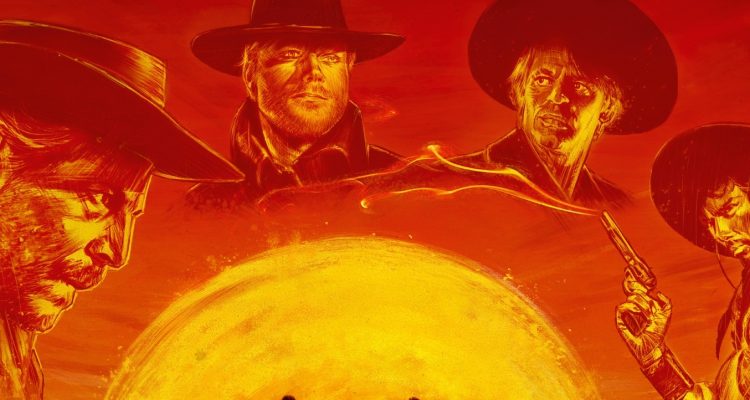 Arrow’s box set of these four spaghetti westerns is fantastic and worth picking up for a myriad of reasons. Massacre Time is the best of the bunch.

After being released from 10 years of hard labor, an innocent man sets out for vengeance.

Gary Hamilton (Klaus Kinski in a hero role) has laid hammer to brick for ten long hard years in a prison labor camp for a crime he didn’t commit, and as soon as he’s freed he uses what little cash he has to buy a horse, a rifle, and some ammunition and he sets out for the man who wrongs him: a filthy rich man named Acombar (Peter Carsten) who blamed Gary for a massive heist that netted him untold millions. Acombar has since become the owner of an entire town, with countless hired goons all over the place, and when Acombar’s son Dick (Antonio Cantafora) shares a stagecoach with Gary, he has no idea who the man is, even as Gary tells him to tell his father that he’s coming for him later that night upon the storm. When Dick tells his father that Gary Hamilton is coming, Acombar panics and alerts all his emn to prepare for a war. With a tornado coming, the town is locked down, but it won’t be nearly enough to stop the man who has nothing left to lose. When Gary rides into town (a great scene where every gun is trained on him, but everyone suddenly loses sight of him because he rides in with the blowing dust in their face), Gary slowly but methodically picks off Acombar’s men one at a time, and in a great, but gory moment he positions one of the bad guys under a falling church tower bell and crushes the dude! When Dick realizes that his father is the villain in this situation, he is disillusioned, but it won’t matter because there won’t be time for a change of heart when Gary Hamilton loads his gun for another blast of vengeance.

Solid in every way, And God Said to Cain is exactly what you would want from a spaghetti western. Kinski is a man of few words and plays his role fairly stoically, which is a nice change of roles for him. He looks unusual for a hero for this kind of movie, but it works. There’s not a lot of gunplay in this one; the bad guys never really have a chance to shoot back because the hero basically just picks them off when they’re not looking. But that’s fine because that’s the sort of movie this is. From director Antonio Margheriti.

A wronged sharpshooter trains a young man to get his revenge for him, but things don’t go as planned.

A train coach heist turns into a massacre, and the ringleader is a cutthroat villain named Billy Kane (Venantino Venantini) who was trained by an expert marksman named Richard Martin (Enrico Maria Salerno). For all his work, Richard is completely betrayed by Billy, and his reward is a bullet in each hand so that he can never properly hold or wield a gun again. Meanwhile, a man named Philip Raymond (Terry Jenkins) is blamed for a murder that Billy and his men committed, but instead of hoping for the courts to work out justice on his behalf, Philip escapes and finds himself in the care of a travelling showman – a broken down and dejected Richard – in need of a star attraction. Richard takes Philip in and trains him up to become as good – or better – a marksman as Billy Kane is, with the hope that he will raise up a man worthy of exacting the revenge he craves, but Philip has a mind and will of his own and it doesn’t necessarily involve killing Billy for Richard. As Philip comes into his own as a superb marksman, he begins angling in on Billy’s crowd with an agenda that Richard never would have anticipated …

A more violent than usual spaghetti western with a brutal prologue, Bandidos is yet another solid entry in the genre. The story and plot are a bit more complex than the average entry, and the cinematography is stylish and almost a character of its own. From director Massimo Dallamano, who photographed the first two films in Sergio Leone’s Man With No Name pictures.

A Mexican peasant with a penchant for sharpshooting returns to his hometown for vengeance for the slaughter of his family.

Long absent to contemplate his woes, a Mexican commoner named Pecos (Robert Woods) walks on foot back to his hometown village where a man named Joe Clane (Pier Paolo Capponi) reigns triumphant like some kind of usurping king over the peasants and commoners living there. Turns out that Clane murdered Pecos’s entire family, and Pecos only has one thing in mind: Righteous vengeance. Pecos uses the fact that Clane has become distrustful of his men over the theft of an 80K fortune in bank bills, and when Pecos gets a line on where the money is, he has an advantage over Clane in their final showdown.

Simple, but effective in its efficiency as a revenge tale with some fun action, My Name is Pecos works thanks to a cool hero who could care less about money and has a great little gimmick he uses to load his gun under his floppy hat. Woods plays the role of Pecos to perfection, and the bad guys are all uniformly despicable, which is great. From director Maurizio Lucidi. A sequel was made with Woods called Pecos Cleans Up a few years later.

A man returns home after years of being away, only to find that the family homestead has been taken over by a rich man and his cruel son.

After years of striking out on his own with gold prospecting, Tom Corbett (Franco Nero) returns home, but the town he grew up in is completely unrecognizable, and worse still is that his father has died and the family homestead has been overrun with goons working for a rich man named Mr. Scott (Giuseppe Addobbati) and his relentlessly cruel son Junior (Nino Castelhuovo). Tom meets up with his mother and his half-brother Jeff (George Hilton), who has become a raging alcoholic on the verge of self-destruction and he is disheartened to find them living in squalor. Wanting answers, Tom tries to get to Mr. Scott, but the attempt at mere conversation gets him a real mean whipping by Junior. When his and Jeff’s mother is heartlessly murdered in front of them, Tom and Jeff decide to work together for some revenge, but when Tom realizes he’s Mr. Scott’s illegitimate son, it poses a problem for him because Junior is his half-brother.

From director Lucio Fulci who was best known for his ultra gore horror movies, Massacre Time is a fun film with a despicable villain and two heroes who are at odds with each other, which makes for some engaging screen time. The movie, despite having a noticeable violent and gory streak, has a lot of real laughs in it, and the end result is a totally satisfying viewing experience. It’s one of the best spaghetti westerns out there.

Arrow Video’s four-disc box set of these films has been released under the name Vengeance Trails, and it comes with the following bonus features: 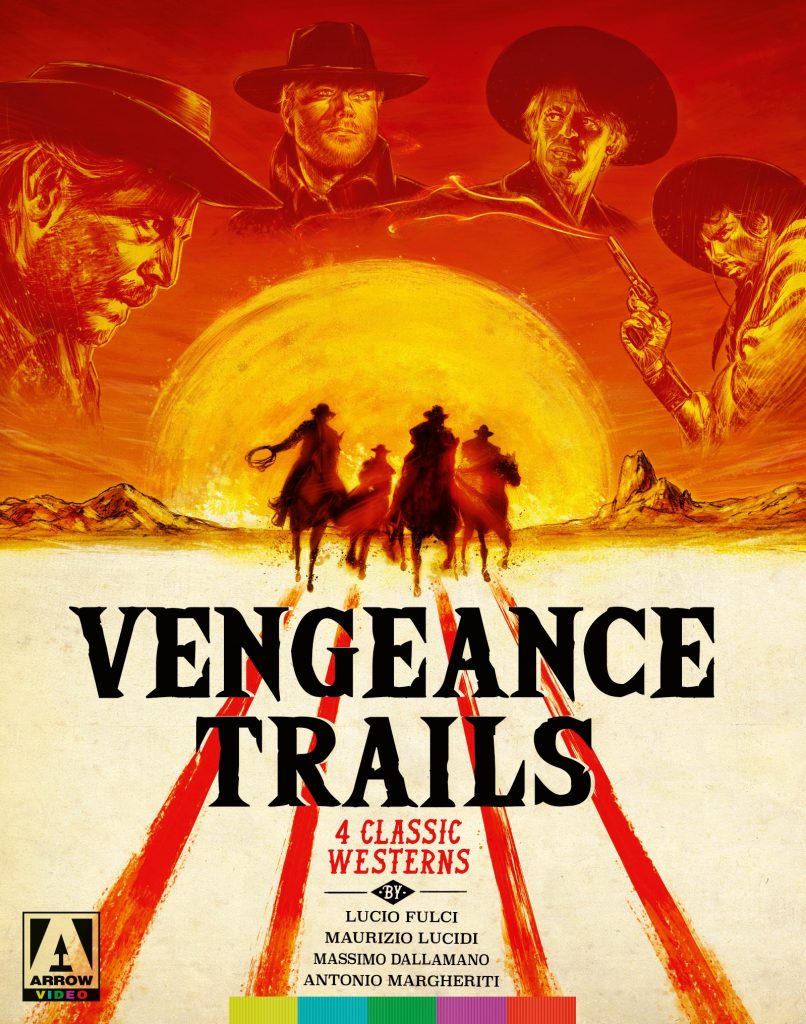