Eric Jacobus has been a presence in film for nearly two decades, creating and being featured in dozens of short films, and more recently making a transition to feature length.  He is part of an organization called The Stunt People, a collection of several martial arts, gymnastics and stunt talents who continue to be collaborate and be part of the creative process in bringing action to screens large and small.  He was recently featured in Blindsided: The Game, a humorous and incredibly well put together western nod to the Japanese Zatoichi movie series, a project in which he was also prominently involved behind the scenes.  Eric provides his valuable time discussing the project and his career in this interview.

How did you first get into film and stunt work? What prompted you to pursue it?

I devoured Vaudeville films as a kid, especially Chaplin, Laurel and Hardy, W.C. Fields, and Buster Keaton. When Jackie Chan combined Peking Opera, which is the Chinese equivalent of Vaudeville, with comedy and action, I knew that was what I wanted to do, but I had no idea how to do it. It was 1999 and the Hong Kong action market was making a major shift toward Hollywood in the wake of the Chinese handover, so there were no more foreigners (“gwailos”) making it big in Hong Kong, and the audition queue for the Hollywood action hero went further than the eye could see, populated by some physical talent that would be tough to match for a small-town kid like me. If I was to have a chance to be like Jackie Chan or Buster Keaton, I had to circle back and do things very differently, and there was no book for that. The hard work was just beginning, but I knew what I wanted to do, and this was when I turned 18.

Was there a particular moment when you knew filmmaking would be a path for you, or did things just happen to fall into place?

I was a tech kid who was programming for my college at age 15, and in my spare time I reviewed Hong Kong action scenes on my website, so after analyzing hundreds of these films I began discerning how to make action films in a new way. What if we combined the Hong Kong style with independent filmmaking, and used the budding internet as a distribution platform? There were only a handful of us doing this at the time, groups like KWOON and Zero Gravity, and people like Vlad Rimburg and Sam Hargrave with Reel Kick and Emmanuel Manzanares, people who are now making major moves in Hollywood. I built a forum where we could all share info and figure this out together, and this is how the path became clearer. We released a short film every week for the first two years and took a ton of criticism, and we’d critique each other, but it made us all stronger.

You are part of an organization of various talents known as The Stunt People. How did its formation come about?

The Stunt People started as a ragtag group of martial artists and gymnasts in northern California in 2001. We built ourselves like Sammo Hung and Jackie Chan built their early stunt teams. We didn’t just do stunts: we had to do everything! One guy would take the camera while the other 2 fought. Then we’d switch off for another scene. We all learned how to edit, produce, write, and direct. We had to foster a “do-it-yourself” mindset, or nothing would get done. Though we’ve all moved around since then, the spirit is still alive and we’ll still team up on projects together.

You star in Blindsided: The Game, but you also happen to write and direct. This is also common among your short films. What prompted you to be so involved with all of these projects?

While I didn’t direct Blindsided: The Game, it’s the do-it-yourself mindset that drives me to push through these projects. In Death Grip, for example, I directed, choreographed, starred, and edited, usually all in the same day. I’ve developed all these skills since my early days with The Stunt People, but it’s wise to start delegating these responsibilities to others. I’d prefer to focus on performing and producing.

Zatoichi was clearly an inspiration for Blindsided, not only in terms of the idea, but also some of the aloof mannerisms and attitude of the main character, which manifest onscreen very naturally. Whose idea was it to adapt the character for the US, and why the decision to go that particular route?

Clayton J. Barber, who directed Blindsided: The Game, and I had both wanted to do an American blind samurai film for years. We developed it in a hotel room in Austin, and Clayton had a strong vision for the project. Then I trained with Walter Raineri, a blind athlete in San Francisco, and that’s when I really found the character.

Was Zatoichi your first choice of character for a feature, or were there others you considered? Are there any other similar characters you have in mind for future projects?

We’ve been developing feature films for almost a decade, but Walter is the most obvious candidate. The Dope from Rope A Dope was another option, but if we’re going to do a feature, it needs to be a talkie, and Walter’s a better candidate for that. We’d love to expand this world into a feature or a series.

While Blindsided gives heart and soul given to the protagonist, it also features some colorful, lively villains, particularly Joe Bucaro’s Sal character. Was this character based on anybody in particular? How much of him was brought to life by writing, and how much by Joe’s input?

Joe really built that character, and Clayton would feed him story points. Working with people like Joe and Roger Yuan made my job easier, because as talented actors they could reciprocate and push me further than I had gone before.

What were the biggest obstacles in ultimately transforming what started out as a short film into a fleshed out, hour long feature?

We were blessed to have Adam Eccleshall as our executive producer and backing the project, and that allowed us to be ambitious, but like any film project there are surprises you have to deal with all the time. For example, David No and I had only two hours to write and “choreograph” the card game due to time constraints. We desperately needed someone’s help stacking the deck after every take to make sure the cards were right, and God gave us a card shark there on set who had just been working as a camera assistant. We were so rushed. I’m still amazed it came out the way it did.

As somebody who has now put together several films of your own, who have been your greatest creative inspirations? Who are your favorite directors or writers?

Aside from the Vaudeville and Hong Kong masters, I love the simplicity of the 80s genre film. We all love directors like John Carpenter. We love the movers of this era because good was good and evil was evil. There was no gray. Today our teachers and professors teach us that gray is better, that our protagonists can somehow be outside the domain of good and evil. And then we appropriate the iconography of evil from the 80s with shows like Lucifer, as if Lucifer was some misunderstood underdog, as if lies can somehow be true. This never works because you remove the foundational rock that genre film is built upon. Without a rock, these modern films and shows have to resort to hyper violence to deliver catharsis, and it’s all a big show of nothing. That’s how you know your genre film is devoid of truth, when it resorts to inexplicable levels of cruelty to jolt your senses. It shows a profound lack of respect for the audience. This is also why the Retrowave and Vaporwave music movements, which fetishize the 80s and 90s aesthetic of simplicity, adopt pentagrams and strange idols as their new “heroes”. Clayton always told me, “Story, story, story,” and story must be built on truth, and truth is black and white, not grey. One needs a foundational rock to build from there, but that rock’s been cast out in favor of relativism and “personal truths”. But the audience likes Blindsided: The Game’s simplicity because we never succumb to this relativism. Walter might wear grey, but that’s his diversion. He 100% on the side of good.

Thank you for your time and we look forward to more from you!

Thank you for your time. 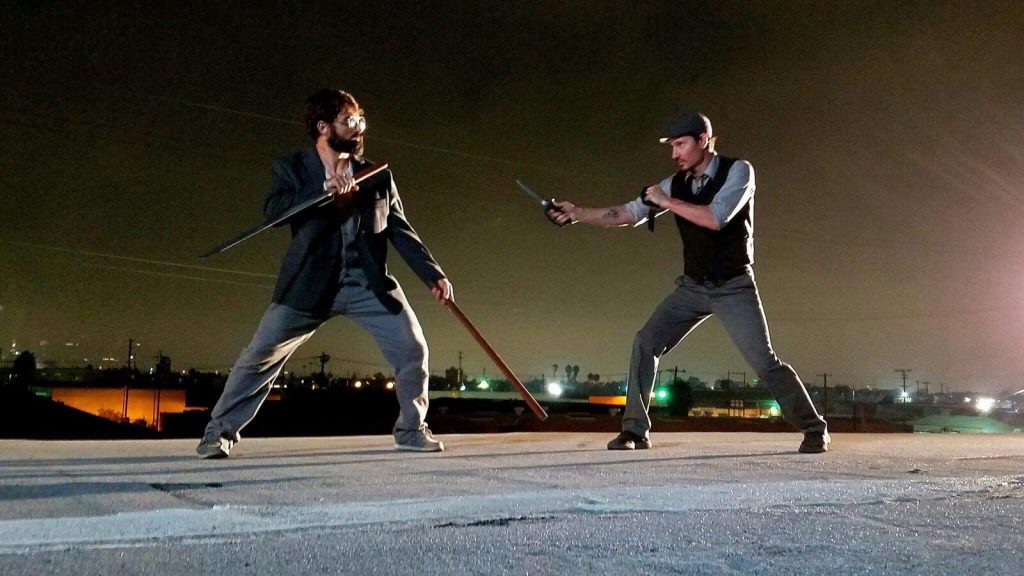