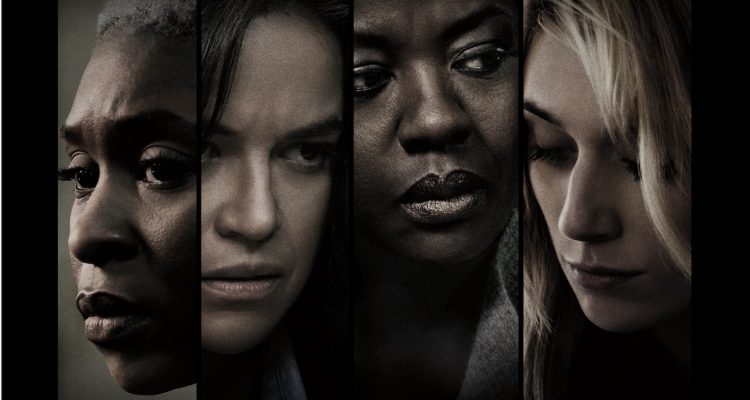 A well-acted crime thriller that delivers on the dramatic arcs, dialogue and heists while feeling gratuitously overlong and imperfect.

Plot: Following the story of 4 women with nothing in common, except a $2 million debt left behind by their dead robber husbands’ last failed heist. Set in modern-day Chicago, amid a time of political turmoil, tensions build when Veronica (Viola Davis, Antwone Fisher), Alice (Elizabeth Debicki, Everest), Linda (Michelle Rodriguez, S.W.A.T.) and Belle (Cynthia Erivo) conspire together to forge a future on their own terms and choose to steal $5 million from the home of prominent politician, Jack Mulligan (Colin Farrell, Tigerland).

Review: Helmed by the always depressingly realistic award-winning filmmaker Steve McQueen and based on the ITV TV show of the same name which ran for two seasons, I pretty much knew what I was in for. And like before I got half of what I wanted. And half of what was delivered was also half well-done. Director/co-writer McQueen has always figured out how to created stunning looking, well-acted pieces with very relevant discussion and engaging themes. And like each of his movies, I always am lightly entertained but never feel like they’re rewatchable or best of the year quality. So the same here essentially applied like before. Looking at the trivia section, I found that the film had many improvised speeches and was originally three hours long. This actual movie was two hours and nine minutes but yet it truly felt like it should’ve been a far better paced 90 minutes at the very least. I will not say that the acting, heist prep or premise is overrated in any way as it definitely isn’t but there’s too many overdrawn out scenes that drag. If Coppola, Spielberg and even Peter Jackson can make movies of various kinds that arguably don’t feel overlong, this really tells me that certain premises need to be a certain length.

I get that the filmmakers were going for realism, that much is apparent from the beginning or for anyone who’s heard of the film prior to viewing. However, not every part of real life is necessarily intriguing so it could’ve been easily summed up. There are many editing methods on how this could’ve been done wether it was a montage showing the passage of time being inserted or even a split-screen type summary of the various events. It definitely needed some bigger gimmick than just the dead thieves’ wives teaming up together and the dilemmas they faced.

Much like indie films, I get annoyed too when mainstream films feel the need to incorporate over 10 characters in a non-historical piece as it feels like total overkill (no pun this time), let alone over-budgeted for the sheer hell of it. I have nothing against world building but cutting to the chase goes a long way as did I really need to know all about the politician’s privileged dad? Did I need to see all four gal’s separate stories in COMPLETE detail? Nothing here justified being two hours long. Nothing, not a thing. Crime films like Heat, Training Day and Scarface might be long but they defended it with their gripping Neo-Noir, tone and energy. This had those elements but each time it got started up on those explosive moments, it kept needlessly winding down. I don’t mind being teased unless it repeatedly happens, and that’s when it becomes too redundantly annoying.

This sounds by now like I’m roasting it and found it to be WAY overrated. Surprisingly, this isn’t an epic fail or a lame movie to avoid. It’s just that the pacing was needlessly stretched and didn’t merit such a choice this time. This also isn’t a film you’ll likely rewatch repeatedly as once you’ve seen it, you’ve seen it all. It’s def a reasonable rent or cable TV view but I can’t see anyone seeing this on the big screen. This is the type of movie that actually deserved some interference and recuts. The type where it should’ve been taken away by producers and dialed back down for easier digestion while likely being disowned by its creators.

Adding to the cool hustles, atmospheric Hans Zimmer score, back-stabbings and peril-bound scheming were the cast. They were totally dialed in and Michelle Rodriguez especially deserves more roles like this despite finding a home in overblown Action franchises when she’s not making bad real-life decisions. However, the Linda and Belle characters were not only the least intriguing subplots but deserved far better-known portrayers. I am not typically the one to shoehorn in on every film needing a well-known face but this time some better known stars in an unrecognizable role would’ve been the icing on the cake. They’re solid actors but were they as notable as Viola Davis or Rodriguez? Did I even need to ask that? Despite all this poor organization, the film does eventually deliver the goods yet it’s still wise like with any films these days to keep expectations entirely lowered. Way, way the hell down especially here.