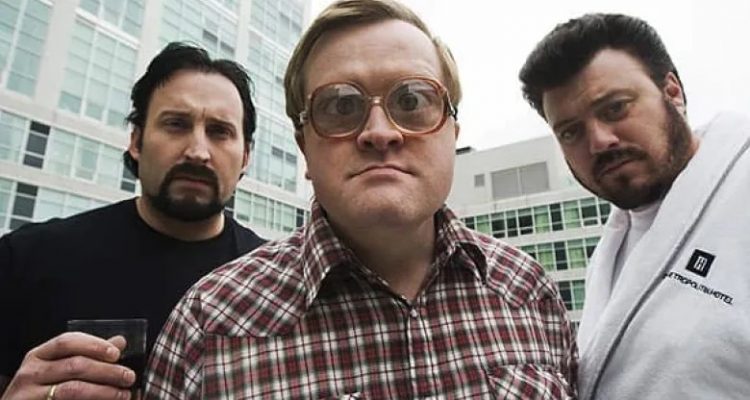 A drug-crime comedy mockumentary gem that is endlessly quotably hysterical! You’ve never seen outrageous characters, pot dealing and inept heists such as this before.

Plot: A documentary film crew covers the adventures of ex-con turned dope sellers Ricky and Julian and the many other colorful characters in their Canadian trailer park apartment complex. Who will be sent back to jail this season? And who will think of the next bad idea-turned-illegal money making scheme??

The show ran for 7 seasons on Canadian TV before being continued for 5 more seasons in an international deal with Netflix streaming. I think it stopped being as clever after Season 7 but it never stopped being a memorably addicting chuckle fest! The characters and shenanigans remind me of outrageous comedies like Caddyshack (and, coincidentally, Ivan Reitman even co-produced the first movie they did later on!) and the mockumentary style is definitely akin to This is Spinal Tap and pre-The Office. Each season has ten episodes that are 20 minutes each so all the mayhem goes by truly fast and the theme song has the perfect sense of irony as it suggests that this is a peaceful trailer park each time it plays. The writing does a good job of making you see what nutty thing will happen next week, let alone end the season to set it up for more mayhem the following year. I love how Ricky is a douche with a code of honor who thinks the simplest adjectives are “fancy words” and any incident he causes isn’t that big a deal. I like how Julian is all muscular and always holding a keg of liquor in his hand yet the calmest, easy-going dude. I dig how Mr. Lahey keeps stalking, betraying and pursuing anyone he dislikes out of his own denied insanity. And how can you not love how Bubbles calls anything (and everthing) a “dimwit” or a “cocksucker”? I also have never seen anyone like J-Roc put on a catchy nonsensical rap jam. There’s no way to watch the show and not remember the bizarrely inept traits of each of these individuals.

By being an original heist comedy formula, having quotable characters (no one is ripping-off Tarantino for the billionth time here) and by being a mockumentary groundbreaker, the whole show gels. It’s so wild each time that it might as well be improvised like the show Whose Line is it Anyway? as you don’t get this much crazy dialogue. The trivia has indicated that half the dialogue is unscripted and that definitely shows as the characters feel so naturally insipid. Bonus points to the show as well for having Snoop Dogg, Skid Row’s Sebastian Bach, Rush’s Alex Lifeson and comedians Doug Benson and Tom Arnold appear on here as themselves in key storylines! If you want to seek out the show, Netflix will always house it so check it out there and witness a riot of a comedic kind.