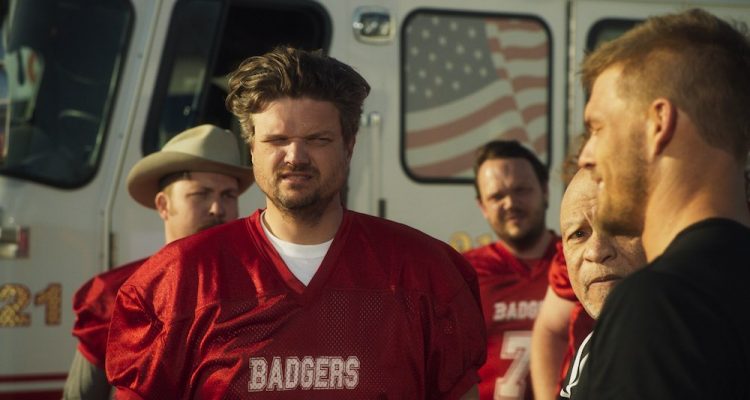 A straightforward football comedy that does what it sets out to do with a “game” cast.
Plot: Patrick (Ryan Hansen, Veronica Mars) is a former small-town high school quarterback-turned-businessman who returns to his tiny mid-west town after old pals, Ronnie (Alan Ritchson, Blue Mountain State) and Mitchell,  (Matt Jones, Breaking Bad) lure him back for Thanksgiving to force him to finish the legendary Turkey Bowl: a football game previously snowed out 15 years ago. Patrick will risk his career future to lead his team against their bitter crosstown rivals, ultimately finding a retrospect about himself in the process!
Review: Sports movies fall under the Action category when there’s a focus on winning, let alone the game play itself. At first this seemed like a Comedy that just so happened to have football players but towards the second portion, it becomes as much about winning the game as it does having the protagonist Patrick use the game to find himself. While not bittersweet or truly that deep (you can only remake Rudy or The Longest Yard so many times anyway), it remains watchable thanks to being believable, amusing and a cool cast of semi-known character actors. I’m not a huge sports fan but will watch anything if there’s something competent or gripping about it, regardless if its football (Any Given Sunday), boxing (Rocky, Raging Bull) or MMA tournaments (Redbelt, Warrior). Fans of Alan’s previous show Blue Mountain State will likely be the target audience as well given the off-color remarks and quirks laden throughout. Some movies can be life-changing and others can simply entertain their core audience. And this has “cult movie” written all over it due to its setting, cast and coming out of seemingly nowhere.