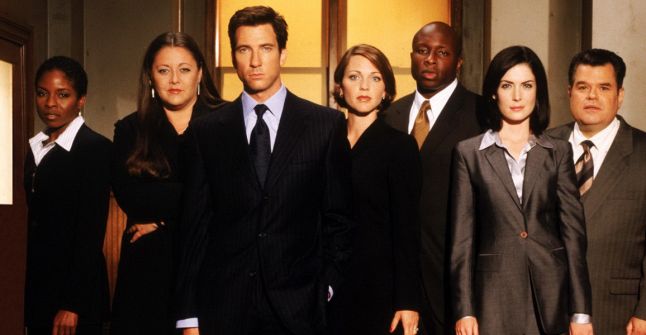 Sometimes overly familiar, this legal drama makes up for its similarities and occasional implausibility with pitch-perfect characterizations and recurring court battles.

Plot: Bobby (Dylan McDermott, Hardware) forms his own Boston law firm with partners Eugene (Steve Harris, The Rock), Ellenor (Camryn Manheim, Eraser) and ex-flame Lindsay (Kelli Williams, Earth 2). Their talented associates Rebecca (LisaGay Hamilton, 12 Monkeys) and Jimmy (Michael Badalucco, Leon the Professional) help them in many heated and controversial cases, sometimes personal ones against the District Attorney, while they figure out their own personal beliefs, interests and future lifestyles.

Review: David E. Kelley is always a neat face to look out for on the many dramatic shows he’s scripted and produced. Sometimes his material has too many cooks in the kitchen after awhile (L.A. Law); his other shows had rather fluffy material kept alive by the whacky cast (Ally McBeal); and other amazing material he’s done doesn’t get near enough attention as it arguably deserves (Boston Public, Chicago Hope). Since I was such a fan of his latter spin-off show, Boston Legal, I owed it to actually check this out eventually on Hulu. Did it merit being a must-see? I’d reckon so for sure!

Season 1 and 2 illustrate the partners’ attempts to form their own law firm while keeping it well-funded and experience sexual tension between some of them, if not social disruptions, blackmail or questionable clients. The latter season also has some new legal enemies and a crossover episode with Ally McBeal. Season 3 has some bigger stakes for all the firm members, more life-altering court cases and moral compromises. Season 4 gets personal with Bobby and Lindsay finally reconsidering what their personal relationship actually is while the firm encounters many recurring murderer-related cases (including some from older cases that threaten the members themselves). Season 5 has the lawyers saddled with the most unusual clients (who may or may not be serial killers) and there are are crossover episodes with two other shows: the school/legal series Boston Public and the short-lived hospital drama Gideon’s Crossing. Season 6 continues the premise with new opposing Assistant District Attorneys Lowe (Ron Livingston, Office Space) and Walsh (Bill Smitrovich, Air Force One) playing dirty tricks against Bobby’s team. Season 7 details Lindsay leaving the firm to create her own legal business and Bobby hires her replacement: Jamie Stringer (Jessica Capshaw). Season 8 concludes the series while also introducing the main cast of Boston Legal and their well-meaning yet foul play laden legal maneuvers. Also features a guest appearance by Pvt. Eye Glenn Hall (Gina Gershon) from Kelley’s other short-lived show, Snoops.

To date, only the award-winning and acclaimed first two and eighth final seasons are the ones with an actual DVD release but I recommend that you just go the streaming route if you already have Hulu (especially since Season 2 sets up so much material for the following season). The whole thing has occasional dated cliches, filming insert edits and overdramatic music that were common in that era but the whole series is still overall well-paced, easy to build up interest in the many characters, uneasy questions with still hard-to-fathom answers and is altogether pretty engaging. A lot of the Neo-Noirish lighting, moody close-ups, legal themes, serialized stand-offs and dry humor all add up to solid development and I wish shows like this got remembered more nowadays as they’re still pretty cutting edge. Anyone owes it to themselves if they like this legal subgenre, any of the actors (especially some of who are in their first big roles) or creator Kelly’s other works. And if you don’t really have much time to bother with the whole thing but want to see where the Boston Legal crew first originated, at least see the final season (because Denny Crane said so!).