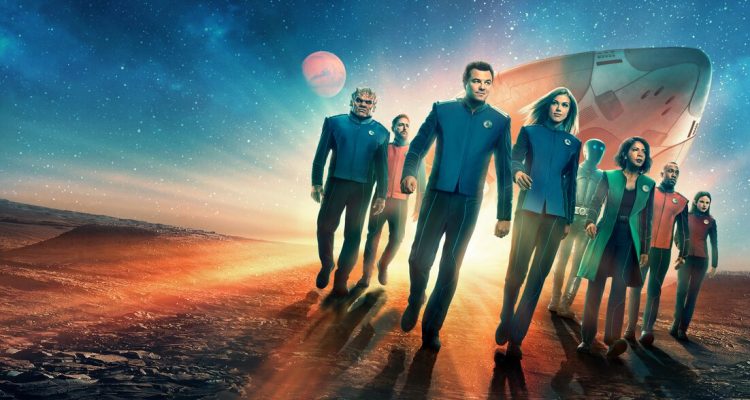 A rather fascinating action-scifi-comedy, even if you’re not the biggest Trekkie or Family Guy fanboy.

Plot: The Orville is set on the titular USS Orville (ECV-197), a mid-level exploratory space vessel in the Planetary Union, a 25th-century interstellar alliance of Earth and many other planets. Inspired by several sources, including Star Trek and The Twilight Zone. It is produced, written, directed by and even co-stars some Trek, 24 and Family Guy alumni.

Review: Season 1: Ed Mercer (Seth MacFarlane, Johnny Bravo), an officer in the Planetary Union’s line of exploratory space vessels. After his career takes a downturn following his divorce, he is given the ship Orville as his first command, only to discover that his ex-wife, Kelly Grayson (Adrianne Palicki, John Wick), has been assigned as his first officer.

I wasn’t sure what to expect when the trailers first hit both the air and internet. I know many don’t care for Seth’s crude brand of humor and I had been hit-and-miss on him myself before. I mainly started being blown away by his wacky comedy films in addition to his Comedy Central Comedy Roasts, award specials hosting and even singing so I knew there was some talent dialed in there somewhere. Given his pop culture savvy nature, it came as no surprise that he decided to do a show that was both a tribute and knock-off of Gene Roddenberry’s cult franchise.

I saw plenty of peers who were familiar with the Trek inspired film Galaxy Quest and Seth’s cartoon comedies but reluctant to get into this. I think this is honestly the best compromise because I found that it injected enough recurring (and predictably crude) wacky subplots while having enough space battles and insanity to make it appealing to even non-Trekkies. For the comedy portions, there’s honestly enough for everyone; you’ve got as much rude humor as you do sex, dating, scifi and physical comedy. If you don’t laugh at the slower gags, you still might get a light chuckle out of any of the other categories.

Like Galaxy Quest, this show basically plays with the unlikely hero saving some other aliens premise while also having some Star Wars-type homages and even some rather deep philosophy that would definitely make the Babylon 5 franchise jealous. I would say this is mostly helped by the cast appearing comfortable with one another and the filmmakers not being afraid to take risks occasionally. The visuals range from limited to rather stunning but overall I wouldn’t say that it was a bust and that they definitely served their purpose well enough.

Season 2: The crew goes through changes and continues to embark on various diplomatic and exploratory missions. Awaiting them are more personal challenges and other unexpected enemies in this huge galaxy.

On this following season, I felt like it was an overall enhancement. Since Season 1 was setting up a few different plot arcs and showing off what it was capable of, this second chapter decided to show new complications, surprise guest stars, new running gags and unusual recurring predicaments. Season 1 had plenty of light laughs and had different mayhem happening every other episode but this was more serialized this go-around, which made it more accepting as its own universe. I didn’t mind this as now thus was more than just a homage and parody show, and also its own deal.

Trekkies will be hit-and-miss with this (as they’re a complicated bunch) and some impatient sitcom viewers might not even make it past a few episodes but those who are more open-minded and relaxed, might enjoy the fun amusement and occasional excitement on display. There really isn’t anything that might test your patience and not every gag is going to land where it should but I’d found that it took enough chances and did enough different things with the premise that it ultimately does more right than it does wrong.