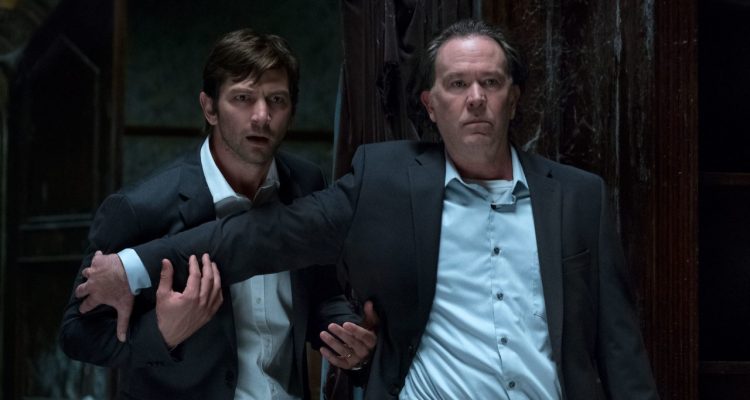 Another nifty and overall well-crafted show that never lags, bores or offends: the absolute rarity. Also, a breakthrough for Horror genre television.

Plot: Season 1 of the show is loosely based on the 1959 novel by Shirley Jackson. The plot alternates between two timelines, following 5 adult siblings of the traumatized Crain family: famous author Steven (Michiel Huisman, Orphan Black), mortician owner Shirley (Elizabeth Reaser, Law & Order: True Crime), drug addict Luke (Oliver Jackson-Cohen, Faster), child psychologist Theodora (Kate Siegel, Hush) and the haunted Nell (Victoria Pedretti). They must recount their paranormal experiences at Hill House- all of which continue to haunt them in the present day via flashbacks leading up to the eventful night in 1992 when the family fled their haunted mansion.

Review: I put off seeing this for a bit (as there were too many other shows coming out that I had to catch up on) but finally got to see it. I’d been a loyal fan of Mike Flanagan’s since seeing his pleasant surprises: the indie terror films Oculus and Ouija: Origin of Evil. I had already took a liking to him as much like Scott Derrickson, Robert Kurtzman and even George Romero, he had a way of showing his love for the Horror genre while making sure the characters were rather well-rounded- all while showing he was capable of filming anything on any type of budget. I also could tell that Mike wasn’t the pretentious type as he ended up even showing up on the RiffTrax forum inviting them to take a stab at an earlier film he’d done so I was already prepared to be continually surprised by this dude! So following this and his Stephen King adaptations, I knew I was in for a treat as he’s not the kind of guy who sits around waiting for something to happen like James Wan and he’s definitely not the pretentious kind who’s gonna try to rip off Dario Argento or John Carpenter without realizing the rules of the game. I would’ve paid to see him take on some kind of Clive Barker adaptation or be asked to team up with another recent genre talent and meld their heads together into a new original outing.

Now, enough with that, and on with reviewing why this show is an instant masterpiece; we’ve had many iconic shows including The Twilight Zone, The Outer Limits, X-Files and Twin Peaks that mixed in other SciFi and Fantasy elements but still had some perfection in the spookiness department. Overall, it had been a minute since I’d seen anything terrifying on TV, let alone one that was set to be well-layered, make use of each episode and feel like it was bringing something new to the table. I was already mixed on the Horror genre in recent years since every other film seemed to just want to be gross but not well-thought out or imitate SAW and I wasn’t having any of it. Sometimes, I would be treated to a fun Omen, Hellraiser or Candyman type film if not some laid-back Friday night outing but options were getting fewer despite an increase in indie Horror taking over.

However, this show was ANYTHING but another lousy Amittyville Horror type knock-off and despite many noting that this was rather unlike the older book it was based on, it was getting some serious hype but not the kind that’s overdone. It was just right so surely the show was too? And indeed it was! It was engaging without being flashy, grim without feeling gratuitous, edgy without feeling over-stylized and well-documented without feeling reliant on any gimmicks and tricks. The first two episodes fly like no tomorrow and in many ways I was reminded of the Hell House LLC trilogy where one instantly feels like they’re snooping in on this and the flashbacks are apparently without reliant on any quick cuts or overdone edits. A typical Hollywood production this is not and having been familiar with how Mike Flanagan would also oversee scripting and editing duties as well, I knew that he always put as much thought into wrapping up things nicely in the dark production room as he did actual shooting of the project at hand. The entire production looks slick without feeling like every other Netflix original that leans on questionable color correction, shaky handheld cameras and lots of nothing happening for over 40 minutes- this is too good for Netflix in fact! You see some grim material but you never once feel like this is too much for its own good, that it’s sadistic and morbid beyond belief or even just a cheap, heavy-handed attempt to play with one’s emotions. Now, don’t get me wrong, it will have some stuff that you might not want to see but it’s never feeling like it just wants to be cheap with shock value or not think it all out before displaying it on-screen. For instance, there are some dead kittens in a few episodes that are talked about but this is hardly unpleasant or too much for even an animal lover such as myself as the animal has already passed on, we didn’t see them die and it’s one of many puzzles connected to the haunted estate. It’s not just thrown in there for an “Eww gross” moment or a tasteless shock. Plus, even without being knowledgeable of the filmmaker’s work, you know from the get-go that everything shown is leading somewhere and that more cryptic material will be unleashed. The talent on-hand disappears into the roles but they are just as jaw-dropping as the material itself. It’s so rare to see a genre piece like this contain such raw emotional reveals mixed together with sensitive empathy, let alone on a TV show.

Not everything will be made clear at first but you’re never left in the dust scratching your head or feeling like nothing is grabbing your attention. Each shot is so carefully planned, each nightmare that a character wakes up from furthers the plot and every character (and their respective plot reveal) feels nourished well-enough that it ultimately pays off. I never felt like anyone was miscast, let alone like there wasn’t much for half the characters to do. They were all everyday people like us at one chapter of their lives until they weren’t years ago and they are living a hell they can’t escape (or can they?) and we want to travel the journey because gone are random ’80s music, misleading build-up or other unwelcome tropes more appropriate for a trashy slasher romp. Once in a blue moon, a miracle occurs and this so happens to be in the form of this very show!