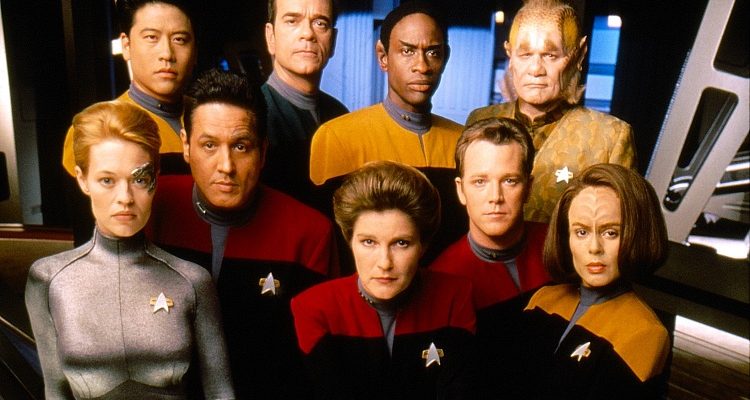 A heavily flawed, mediocre series that does more tripping-and-falling while occasionally delivering on decent entertainment.

Plot: Set in the 24th century, when Earth is part of a United Federation of Planets, it follows the adventures of a Starfleet vessel as it attempts to return home after being stranded in the Delta Quadrant 70,000 light years away on the far side of the Milky Way galaxy. It is a fast ship lead by Capt. Janeway (Kate Mulgrew, Roots: The Gift), with crewmembers: Vulcan security chief Lt. Tuvok (Tim Russ, Spaceballs), the holographic doctor (Robert Picardo, Total Recall) and, later, half-Borg ofc. Seven of Nine (Jeri Ryan, Dark Skies).

Review: For seven seasons, the show depicts a Lost in Space version of The Original Series with some of the same Next Generation alien races. Season 1 covers an accompanying crew party that has a mutiny in play for the ship. Season 2 explores the crew’s friendships and introduces new aliens. Season 3 and 4 develop the supporting navigation characters more, give the doctor more freedom and have a bigger focus on the Borg antagonists. Season 5 examines darker traits and behavior for the crew as they stumble into more unusual quadrants and space barriers while focusing more effort on finally getting home. Season 6 and 7, much like the 1st Season, cover more individual stories, more new aliens and more subtle character growth, all while showing the crew encountering a spacetime continuum that might finally help them arrive home while making another final stand against the Borg.

I know that many found this show to be reasonable, or even their personal favorite of the franchise but in all honesty, the good was often outweighed by the bad. Yes, you still get some leftover themes, stand-alone stories and solid tracking camera shots like the last three shows. And while most of the cast isn’t bad, some of them are too often underwritten or never give the best line delivery. While Janeway makes for a solid captain, she only often is in action mode and not always given the best backstory. The Doctor serves as comedy relief, Tuvok is a reasonable Spock-esque Vulcan and Seven of Nine has easily as interesting an backstory as Worf or Data when the cameras aren’t focusing on making her be above-average eye candy. Unfortunately, the supporting characters are too often passed over and when they do get an exclusive episode dedicate to them, it’s still tough to fathom up any care since you don’t know much about them. Chakotay is never that well-portrayed and more often than not gets crappy throwaway lines to deliver despite going for a solid leadership role; Paris, Torres and Kim are all well-acted but almost always glossed over or not given enough to do; Neelix as the alien chef of the ship is beyond unbearably bad and remains a stain on the show, let alone the franchise as a whole, all due to his stale joke delivery, instantly irritating persona and poorly-constructed conception as a whole.

Later on, mid-way thru the show, you do get some interesting cameos by crewmen from the other shows like Troi, Sulu, Barclay and the even actors who have previously guest starred on the other shows as different characters. But when the other shows did this, it often made up for it by justifying their purpose in the story or being a delightful attention-getter. And unfortunately it almost always makes for a cheap ratings grab as oppose to a welcome contribution. The Borg episodes are always fascinating much like they were in the previous TNG show and film spin-off First Contact but since you have to wade thru some cumbersome planetary visits, blandly indulgent holodeck moments, time travel and childish humor, it still becomes more trouble than it’s worth just to get to whatever good stuff there might be. The visual effects work is also often disappointing, and sometimes the sets and costumes feel far more welcome in another ‘90s DTV scifi B-movie. Those films have low-budget and lowbrow values though so what is this $2 million per episode-budgeted show’s excuse?

I realize that executive producer Rick Berman was a hard-ass insisting that things not be too serialized in their scripting and that showrunner Brannon Braga was overworked as a whole. I get it, I truly do as a quick overview of the previous Trek shows never had a perfect time getting prepped for their productions. But since there are almost always continual stumbles, it still endlessly becomes too much of a pain to get to far more decent episodes. Sometimes even half an episode is good and the rest of the execution feels trite. So despite being far from unwatchable, this overall feels like a step in every other type of wrong direction- much like how the ship itself entered this wrong nebula to begin with.