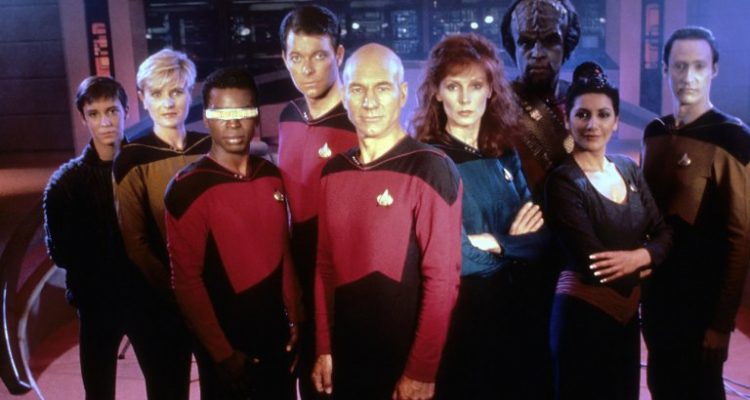 Season 1 & 2:
Season 1 primarily plays it safe by repackaging similar disease, planet outpost and adventure themes from the original Trek show while focusing on single-season security chief Lt. Yar (Denise Crosby, Eliminators) and introducing the Ferengi alien race. Season 2 covers the intro of other new alien antagonists like the Borg and having Dr. Pulaski (Diane Muldaur, McCloud) replace Dr. Crusher for this season. Worf, Riker and Data are all fully developed as well.

This series took awhile to make any sort of cultural impact as not only was it playing with fire at times but some of its best elements weren’t yet starting up. Behind the scenes, things were chaotic with original franchise creator Gene Roddenberry being a contrarian due to being on his last legs, and his lawyer decided to insert himself into the proceedings by rewriting all the talented writers’ work. There was some gold struck here and much stuff here is fairly watchable despite an occasional B-movie look and the actors still handle their performances well despite occasionally seeming confused. Some of the material will still appeal to fans of the original Kirk era show since it still has lively topics and gripping planet exploration. Replacing Dr. Crusher in Season 2 was a mistake but not an unbearable one- in fact, Season 2 fares much better by then. I would never state a single episode as deadly dull unlike other shows that typically take forever to get going; it’s all just down to it having so many change-ups that it was never as memorable or well-balanced. Either way, we live in a different era now so if this season is annoying the crap out of you, just go ahead and skip it but if you want some occasional food-for-thought and don’t mind the dated looks and occasional cheesy undertones, you can still find it watchable if not mildly enjoyable.

Season 3-7:
Seasons 3 and 4 embrace more recurring storylines while finding its true narrative voice with the extended backstories of Picard, Worf and Data being concluded as well as the season cliffhanger with Picard’s capture by the Borg. Also incorporated are additional crewman Barclay (Dwight Schultz, The A-Team) and his quirky storyline; the Klingon and Romulan Empire’s conspiracy against the Federation; and a shocking reveal on Romulan Cmdr. Sela (Denise Crosby), a daughter of an alternate reality Tasha Yar(!). Season 5 wraps up the conspiracy plot while introducing another new Enterprise officer: Bajoran Ensign Laren (Michelle Forbes, Guiding Light) who has to overcome alien prejudices in Starfleet. Also featured are more episodes of Wesley maturing in his Starfleet career and a two-parter where Picard must meet with Vulcan Ambassador Spock (Leonard Nimoy) who may have defected to the Romulans. Season 6 and 7 cover Data being asked by his cyborg twin “brother” Lore to join him and some rogue Borg while also incorporating the crew into some spy missions, questioning their true loyalties and discovering shocking personal stories- all while Q tests Picard’s knowledge before discovering a possible way to save mankind once and for all.

All bets are off that just about every post-Season 2 season from this point on gets grinding on most (if not all) gears. It starts becoming edgy and while there may still be an occasional weak episode, they are now far from being heavily flawed. And due to being less problematic and focusing on more drama-based battles and inserting more science-based logical discussion, you finally have a winner. By this point, you will see why fans still can’t decide which is the single best Trek show. This show does sorta get mentioned more due to more heavy syndication, a diverse cast of trait-driven characters and enhancing the amount of recurring alien races but it overall came down to the perfect amount of gripping two-parters, the production being more organized behind the scenes and a cast that actually loved working together with one another. There’s so much to like but there’s much more to love at the end of the day.