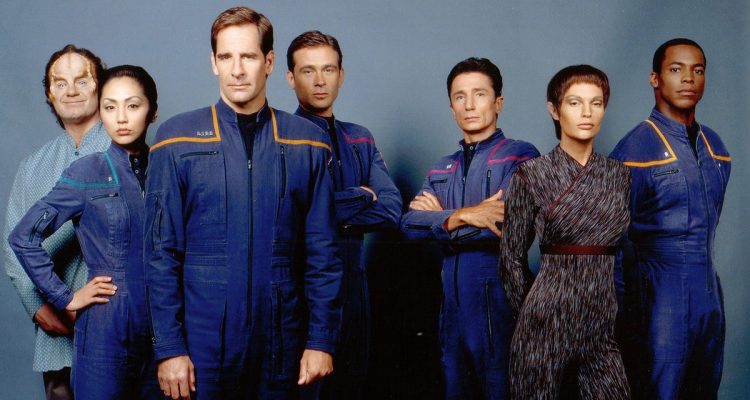 This unfairly bashed show came out at the wrong time and has some of the best Trek writing to date in its later half. In a streaming age where all the franchise’s shows are being rediscovered, you can do no wrong binge-watching it nowadays.

Plot: A prequel series set 100 years before the original Star Trek series, it focuses on the early years of Starfleet before the formation of the Federation. The series is set aboard the Earth ship Enterprise NX-01, captained by Jonathan Archer (Scott Bakula, Quantum Leap) and his crew: Vulcan Officer T’Pol (Jolene Blalock, Jason and the Argonauts), Chief Engineer “Trip” (Connor Trinneer, 61*), helmsman Mayweather (Anthony Montgomery, Leprechaun in the Hood), linguistic Comm. Ofc.  Sato (Linda Park), Tactical Ofc. Reed (Dominic Keating) and Dr. Phlox (John Billingsley, High Crimes).
Seasons 1-2:
The first two seasons depict the human exploration of interstellar space by the crew of an Earth ship able to go farther and faster than any humans had previously gone in the 90 years since Star Trek: First Contact. The Vulcans have been mentoring and guiding humans, routinely holding back scientific knowledge in an effort to keep them contained close to home, believing them to be too impulsive
The early encounters and historic culture of familiar Star Trek franchise races, such as the Klingons, Ferengi, Borg and Romulans are chronicled here. Unfortunately, these first two seasons are way too hit-and-miss and are what prevent it from finding its core audience initially. Sometimes you have episodes which touch on the same incredible themes that made the previous film/TV installments so notable and they do much of the same, if not better. Other times you will have a cool idea that still isn’t the most entertaining or best episode.
Overall, it does have some reasonable first few episodes in each season and effective cliffhangers in both. Everything else inbetween varies too much in quality despite the actors not being confused, the filmmakers being familiar with the material, solid effects and the producers marketing its style towards the far more popular X-Files and Star Wars crowd. All I can recommend is that if you’re not digging certain episodes, then go to another that does grab your attention.
⭐️⭐️⭐️1/2 out of 5 Stars
Season 3-4:
Season 3 and 4 deal with the mysterious Xindi alien race’s attack on Earth while also further developing the lead characters and the more early encounters between Humans, Vulcans and Andorians. It also deals with various three-part stories which include a Temporal Cold War alternate timeline where the mysterious aliens caused Nazi Germany to take over the USA post-World War II and an origin story surrounding that ties geneticist madman Soong, who’s the ancestor of TNG character Data’s creator, and responsible for the enhanced superhuman race, much similar to the titular villain’s race in the Wrath of Khan film.
These two seasons are the absolute heart of the show by keeping the quirks and excitement that was working in the previous two seasons, as well as injecting a far better narrative. It’s truly a shame that it was only able to happen due to the ratings floundering, a switch-up of the writers’ room and finally having the stories be serialized as opposed to too stand-alone. Its key winning formula is that you finally feel like each crewmember is humanized and has breathing room, unlike the initial flawed seasons which relied too much on paying fan-service, sneaking in easter eggs and too often felt like sexier versions of otherwise weak Original Series/Voyager episodes. We, the Trekkies, want our substance, not routine by-the-book stuff that plays it safe.
This season has lots of near-flawless episodes and the cliffhangers are well earned each time due to the writers being either well-versed scribes to begin with or Trek novel spin-off authors. It helped that all of them were finally getting their chance to work at their dreamjob of writing Trek TV scripts. And it truly shows as these seasons are welcome entries to the Trek saga and will also appeal to newcomers who want some engaging space war-and-peace to engage in.
⭐️⭐️⭐️⭐️1/2 out of 5 Stars
Overall, this series nowadays deserves to be ranked up there with the better hours of The Original Series, Next Generation and Deep Space Nine. By the time the first two seasons had come out, it was too late to make amends as the Trek franchise was feeling redundant by that period. The similarly (perhaps more) flawed Voyager had ended not too long ago, and the mixed to negative reception of the box office bomb that was the Nemesis film proved to not be the best use of The Next Generation crew’s cinematic voyages. The franchise owners didn’t know what their audience wanted anymore and in a post-Star Wars prequels/Matrix age, the crowds weren’t as keen on seeing anything pertaining to long-running TV franchises.
But that’s all changed as this show’s best episodes and seasons easily stick with one far better than they did when they originally aired. Between this, the Abrams’ homage fueled films and the recent CBS All-Access shows, I highly recommend Enterprise to the streaming age crowd.