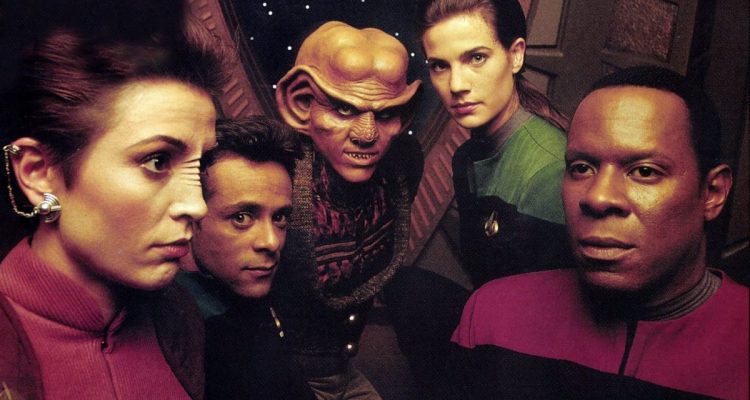 A very deep, moody and sometimes psychological show that starts out uneven before gearing up into a rather versatile space action-drama.

Plot: A spin-off of The Original Series and The Next Generation, this series is set on a space station orbiting the planet Bajor. This time, Cmdr. Sisko (Avery Brooks, Spencer for Hire) is in charge of a diverse crew with no USS Enterprise to help them. His crew must fight off rival alien species who want control of the station because of its strategic position close to a wormhole, which allows speedy travel to the far reaches of space. Sisko’s crew includes: Security Chief Odo (Rene Auberjonois, More Wild Wild West), Operations Chief O’Brien (Colm Meaney, Under Siege), Science Ofc. Dax (Terry Farrell, Hellraiser III) and Dr. Bashir (Alexander Siddig, Lawrence After Arabia), who all welcome alien visitors, root out evildoers and solve all types of unexpected issues.

Seasons 1-3:
Season 1 introduces the crew while having appearances from other Next Generation characters and incorporating other stand-alone supernatural happenings. Seasons 2 and 3 covers the emerging Bajoran and Cardassian conflicts with minor TNG Klingon and Starfleet characters guest appearing, and the latter season having more alternate timelines and Sisko meeting new girlfriend Kassidy Yates (Penny Johnson, The Larry Saunders Show).

Much like The Next Generation, this show started out taking its sweet time getting started. You could argue that it had lots working against it since it was on at the same time as TNG as well as in competition with the similar yet overall rather different space show Babylon 5. However, with Babylon 5 I was able to get into right away despite the limited budget, and TNG I was able to warm up to thanks to the likable characters and episodes at least being inspired by The Original Series’ numerous types of mystery and complex missions. Overall, despite never personally caring for the Ferengi aliens, it does occasionally become engaging and leave mostly positive impressions (if sometimes indifferent ones) but it’s never dull, just not always able to scope out its complete vision at times. Sisko never becomes truly likable in the way that Kirk or Picard were but I still respect his integrity and intense decision making. But the best that show has to offer is still yet to come!

Seasons 4-7:
Season 4 chronicles Sisko and co. having Worf (Michael Dorn) join the DS9 crew after they find themselves in a hostile stand-off with Gowron (Robert O’Reilly) and the Klingon Empire after the latter takes over Cardassian colonies. Season 5 develops more backstory for Bashir and Worf while solving more Klingon and other related conspiracies from the previous season, among more strange happenings and a surprise time-travel to Capt. Kirk’s timeline(!). Season 6 and 7 chronicle moral conflicts on a time of final space warfare with the totalitarian alien faction The Dominion while wrapping up all the character’s ever-changing storylines.

Here’s where we finally get to the version of the show that fans definitely always loved. Moving Worf over here was a beyond wise choice, and giving more backstory to the other established cast while having the Klingon material from the previous show just became the icing on the cake. The tone, the family overview of the station, the vast conspiracy, the build-up and the groundbreaking-made space battles all make for pulse-pounding and dramatically rewarding entertainment. So if you’re not feeling the love for earlier seasons, skip around thru the first three years but don’t deny yourselves the epicness of the final four years!