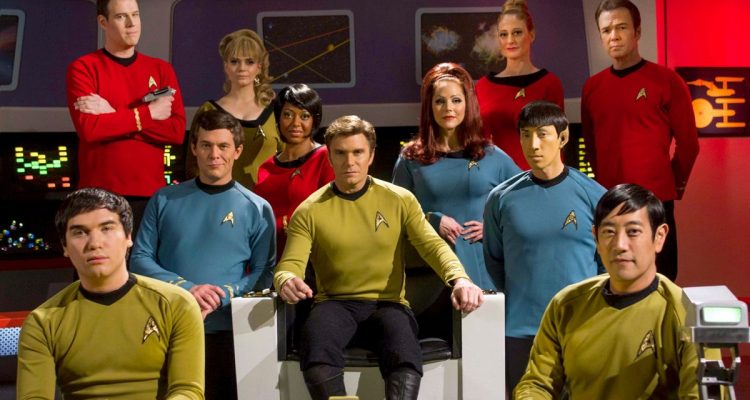 One of the few rare instances of a well-done professional looking unofficial sequel TV show produced by fans who live and breathe this material.

Plot: A fan-made 11-episode web series inspired by what the final five-year journey of Capt. Kirk’s Enterprise voyage would’ve looked like in unproduced seasons for Star Trek: The Original Series.

Review: First off, this show has the look a d style of the original show down to a tee, with even Trek actors like John de Lancie, Michael Dorn, Marina Sirtis, Mark Rolston and even Chris Doohan, the son of original Scotty actor, James Doohan, appearing as his late great father’s role. There are also guest roles by various English anime voice dubbing artists in the key roles as well as performers from other SciFi/Fantasy films and shows like Star Wars, Xena, Power Rangers, Doctor Who, Buck Rogers, Battlestar Galactica, The Expanse, Buffy, Incredible Hulk and even Grant Imahara from Mythbusters! While I didn’t always buy the actors who were portraying Spock, Dr. McCoy and Kirk 100% of the time, they still had the right body language and overall vibe they were going. The scripting was rather witty at times and was clearly by fans who were thinking to themselves “What’s an idea that hasn’t been done to death in this franchise?” and sometimes they even cross over ideas that were in the latter spin-offs but never done in the original show like extended battles and virtual reality holodeck visits. Even more enticing are the professional looking visual effects and film sets. The sound design and music cues are also well-inserted to where often times you do feel like you’re watching a legit episode- it’s that easy an escape from reality. Non-fans of the franchise will also find this rather watchable but won’t get the full story but nonetheless might like some of the celeb cameos and suspenseful moments. Last of all, the spaceship looks wonderfully recreated!