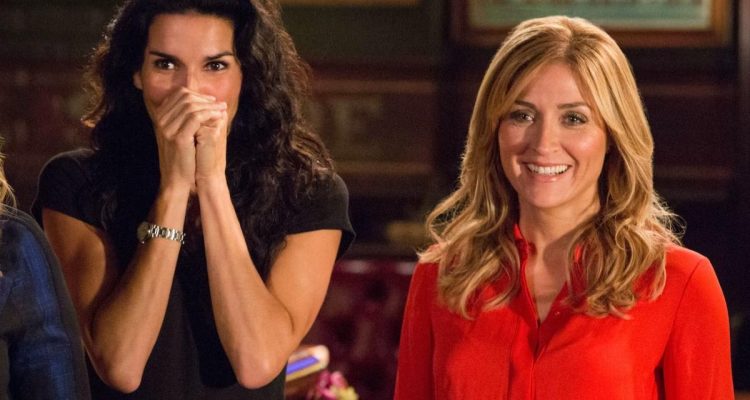 A rather clever, well-done mystery and buddy action-crime-comedy that knows how to get one’s attention without insulting them, let alone keep one coming back more for endlessly entertaining amounts. A lovely genre installment as a whole.

Review: I’ve never read the books these are based on but it looks like the author was honored to even have this be an adaptation, let alone the fact that she was somewhat involved in the adapting process. Either way, this is a show that will definitely appeal to fans of NYPD Blue, The Closer, Cagney & Lacey, CSI, Bones and even Lethal Weapon/48 Hrs. type buddy formulas- all with a Boston setting no less. The show’s storylines are different each week and often include supporting characters such as: Rizzoli’s brother Frankie (Jordan Bridges, L&O: Conviction), who’s also a loyal cop like his sis; Vince (Bruce McGill, MacGyver), Rizzoli’s former partner who’s also an ex-‘Nam Marine and has various hobbies; Barry (Lee Thompson Young, The Famous Jett Jackson) as Rizzoli’s new smart yet humorous partner; Lt. Cavanaugh (Brian Goodman, The Last Castle), who grows to be a rather easy-going, rule-bending boss despite initial awkward first impressions; FBI Agent Dean (Billy Burke, 24), who’s also romantically eyeing Rizzoli; Sr. Criminologist Susie (Tina Huang, The Office), who’s has a self-described rather physical memory; Lt. Col. Casey (Chris Vance, Prison Break), an Afghanistan hero who used to dare Rizzoli in H.S.; and Rizzoli’s overbearing mother, Angela (Lorraine Bracco, Goodfellas), and her divorced father, Frank (Chazz Palminteri, A Bronx Tale), a plumber business owner. That’s already a mouthful just summing all that supporting character material up!

The show benefits from being not only well-organized but having a reason to keep any viewer returning. It’s got grim cases but never to where it doesn’t have anything light to balance it out, let alone being able to mix both the serious and funny rather well. The show tries to be a bit plausible while also not reliant on any absurd or gimmicky nature. It’s not a star-driven show but by having a cast of semi-known and veteran character actors it still incorporates respectable characterization being brought to life (and it didn’t hurt that some of the supporting cast had worked on other shows earlier together. The occasional cast change-ups are only with some supporting characters but are overall rather minor and never feel like an apparent contract dispute or misbehaving actor. While there are occasional well-known guest stars, the crime and the comedy segments are the main attraction with the Action elements often finishing out every other episode- all which help this stand out instead of being too reliant on “whodunnit” tropes or reminding you or earlier, arguably better procedurals. What also helps are occasional episodes each season that show a different side to each character; the title characters might be unlikely pals but they’re mainly wild co-workers if anything: Rizzoli is a hardass bit not unapproachable, just a dry-humored gal outside of cop life. And Isles is another odd-ball yet very sweet-natured person when she’s not trying to determine an often not-too-graphic autopsy. And they’re not always together, which is good because that changes up each episode’s storyline and allows interaction with the other colourful and sarcastic characters instead of it being two people surrounded by static cardboard cut-outs.

The show also benefits from not trying to restrict its audience too much. When the thrills and crime-solving moments kick in, you are often spared the victim’s opening death or a grisly flashback moment during the final reveal. And yet you’ll still get realistic looking shoot-outs and examining, let alone well-thought out criminals who are never repeats of previous characters they can’t all be serial killers, crooked businessmen or gangbangers after all!). The funny moments are never reliant on catering to only guys, gals or even profanity itself yet much like the crimes, there’s something for everybody but equal effort is put into each one so this often avoids viewers being tempted to guess who will say what or solve which.

This whole show doesn’t take anything lightly yet aims to be a worthwhile crowdpleaser (which probably explains the few TV audience awards it got). It wants to maintain interests in all areas but it doesn’t want to be melodramatic or chick flick-like. It’s highly entertaining but its got details to avoid feeling like mindless popcorn. It’s got a change of scenery by being set in Boston but it becomes a character in its own self for this show (How could it not? It’s Boston!) instead of being a random change from the overused LA or New York. It’s got tropes yet never to the point of unintended self-parody or feeling like it’s not doing anything with said cliches. It’s similar to other shows yet never uninspired. It’s the perfect mix of pleasing in all areas enough to where as a whole it holds together rather well. Speaking of Boston, I’d easily describe this whole show as a tasty Boston cream pie with plenty of other appetizers and meals to accompany those who can’t eat pies or want other options available (Cheesecake Factory restaurants, anyone?). THIS IS that kind of show! If you typically hate cop shows from years of seeing crappy ones, watch this as it feels like a complex character study/crime show which just so happens to have some cops in it. If you hate how downhill the buddy genre gas become in recent years after the ‘80s and ‘90s ended, this will definitely restore your faith in “justice” for all those “injustices” from past years. If you want a mystery that dares to be its own brand instead of rely on only how smart the writing or characters are, then hit this up because the suspense is definitely like a best-selling novel that makes you not realize how fast time flew by. I’d personally rank this inbetween Cagney and Lacey, the first two Lethal Weapons and Bones as it definitely made use of all seven years to where like any good film/show, it knew what was working early on, was comfortable with that but never got too comfortable to risk being repetitive. And like a good book, it knew how to keep the pages turning instead of forcing one to skim-read or put a bookmark in it but never finish reading it. If you do something well and gel with most of your elements, then sometimes that’s all you need because it’s ultimately all that matters in the world of entertainment. If you want the best elements of a Donald P. Bellisario (Magnum P.I.), Steven Bochco (NYPD Blue), then this is a perfect mash-up of hardened cop joyrides and amusing commentary. While Criminal Minds and Law & Order franchise were able to detail the themes surrounding a crime and its after effects, we also had The Closer and Bones examine the day-to-day human and mildly comedic moments. Either way, those shows all hit their respective audiences because they hit what areas they needed to and never came up empty on what their fanbase wanted. This feels like a friendly cousin of those four types but it’s hardly a cousin twice removed (or even a bastard child). You can find it on Hulu streaming but if they remove it suddenly, do a random but on Amazon Prime or check out the physical media and prepare to get five-star service. It’s the equivalent of a cheeseburger with too many calories but which stats with you the entire month to where you might as well had ordered it ten more times, it was that good after all!