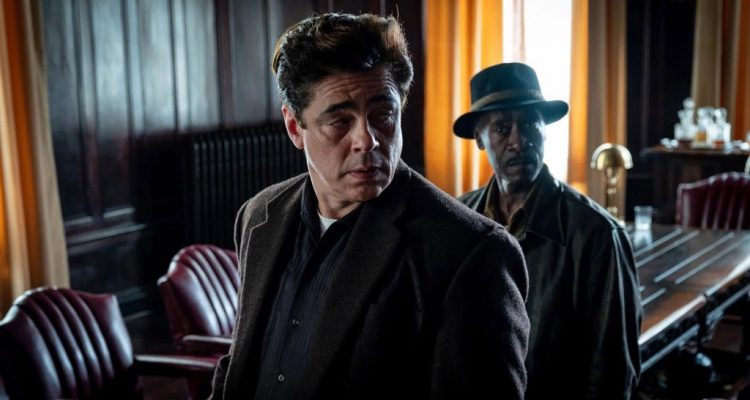 Another familiar Noir genre throwback from Soderbergh that will appeal to any fans of dark crime comedies with it’s different setting, amusing dialogue, mild shenanigans and deadly outcomes.

Plot: In 1950’s Detroit, a heist co-orchestrated by the mysterious Jones (Brendan Fraser, The Mummy) goes wrong. His hired associates Curt (Don Cheadle, Out of Sight) and Ronald (Benicio del Toro, License to Kill) use low-level thief Charley (Kieran Culkin, City on a Hill) and adulterous bank manager Matt (David Harbour, The Equalizer) for this dangerous hustle. Getting in their way is policeman Joe (Jon Hamm, The Unit) and they will need the help of other powerful figures like Frank (Ray Liotta, Goodfellas), Frank’s scheming wife Vanessa (Julia Fox, PVT CHAT), Aldrick (Bill Duke, Predator) and Mike (Matt Damon, Ocean’s 11) to get out of this neverending mess.

Review: First off, even if you’re not a huge Steven Soderbergh fan, there’s something here for everyone here. Often using a ’70s vibe in most of his work, it’s interesting to see him launch back two decades. His usual voyeuristic shots and in-the-moment segments are on display and beautiful to witness as usual. Cheadle and del Toro both are their usual savvy selves and the dialogue for all the characters is a special kind of snappy yet appropriate kind. Said script is provided by Ed Solomon, who has helmed the other welcome comedic adventure franchises that are Men in Black, Bill & Ted and Now You See Me and it is just as amusing, if not as bold. There’s some other subtleties and amusing characterizations that work well in this. I like how we don’t know what we need to know until it’s presented and when said surprise happens, it’s truly in one’s face which just adds to the “holy shit!” moments laden throughout this film. The element of surprise is well-utilized and any viewer can tell that this will only play a bigger part of what any outrageous-heist-gone-wrong tends to do but if you’re looking forward to it, that’s all the better!

Other elements of the 1950s are presented well and the art direction department really did a good job of capturing that feel instead of relying on random homages. If there’s any homages, there’s similar shots to Soderbergh’s Out of Sight for sure. David Holmes returns to provide another unique score like he’s done for the filmmaker in the past and I was really digging the trumpets in the last 30 minutes of the film. Looking up the historical material relating to Detroit’s automobile industry and racial politics after the fact, they are definitely present in this film in a subtexted way and are there for further examination after you’ve enjoyed the main spectacle but it’s interestingly inserted as it is just to add some extra layers to a film’s already solid identity. I don’t think all of those historical inserts are really all that successful but they will definitely present there nonetheless and will make for an extremely interesting rewatch. All the other supporting actors did well, had some other amusing subplots and, for once, I didn’t feel like some of them were wasted or given less to do unlike some of Soderbergh’s other ensemble casted films. There are some loose ends still but it’s still not an insulting intelligence film nor overpotted. It’s altogether just the right kind of grim escapade that we all need this summer.