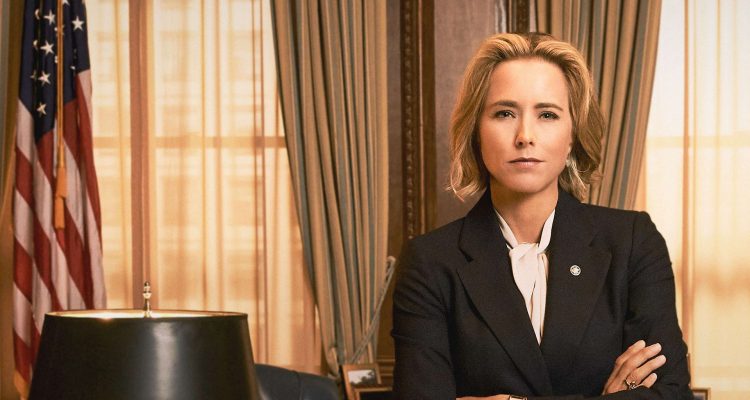 A part-espionage, part-disaster drama that is helmed by electrifying performances, intellectual discussion and political thrills.

Plot: A gripping political drama created by Barbara Hall (Homeland) and executive produced by Morgan Freeman (Se7en), it follows Elizabeth Adams McCord (Téa Leoni, Bad Boys), a former CIA analyst who is appointed to the position of United States Secretary of State by incumbent President Conrad Dalton (Keith Carradine, The Long Riders) while being micro-managed by the good-willed yet strict Chief of Staff Russell Jackson (Zeljko Ivanek, 24). In accepting the position, McCord must negotiate not only with foreign dignitaries, but also with her religious scholar and NSA handler husband Henry (Tim Daly, Wings), and a staff inherited from her deceased predecessor George (William Sadler, Die Hard 2), including his mistress Nadine Tolliver (Bebe Neuwirth, Frasier).

Review: The first five seasons cover the various foreign intrigue, amusing staff and title character McCord playing hardball with various political sides while handling her various opinionated kids. The sixth season, re-titled Madam President, is a final 10-episode farewell showing her first year in office, the days leading up to that and the remaining obstacles Elizabeth seeks to overcome.

Leoni has always been naturally amusing when not distracting viewers with her surprisingly effective dramatic acting and eye-catching beauty, and she showcases all three of those charming elements in this drama which has many of the same producers including Paul Redford who’s also worked on similar shows like The West Wing , The Unit and Designated Survivor. At times, some episodes will start out with some unusual third world chaos that you almost mistakenly believe for a minute you flipped the channel to something else like SEAL Team or 24!

It helps that the show doesn’t want to preach or change your minds, just serve as positive thinking and challenging ideas while also providing enough inner-character conflict to make it feel relatable and never feel like it’s playing it safe. The various international crises, situation rooms and natural disasters only are the tip of the iceberg. When these various conflicts aren’t serving as the main issue of the episode, they’re either in the backdrop for the world that’s been created or foreshadowing bigger obstacles that will have to be overcome. Social media and political families plays a bigger part of this material here, especially much more than West Wing or Designated Survivor, both of which often hinted at such material and only dedicated about three episodes per season to such insight. Here, we get to see the McCords and their various quirks but the show is no melodramatic push-over and instead allows each of the three kids to evolve over time and the parents fortunately keep their asses in line. That’s good because I think we can all agree that it would be unentertaining if it went into crappy Disney Channel mode.

Emily’s former CIA supervisor background only makes her more bad-ass and she and her husband both individually end up in deadly encounters which adds extra credibility to their covert ops and national security insight. You totally would want people like this running your country as opposed to the real-life crooks, actors and businessmen we get ever so often.

The similar mentioned political dramas have shown many big war conflicts and very occasionally comedic staff-members and as iconic as The West Wing was and as deadly as Designated Survivor’s innumerable attack sequences. And while I’m not sure that this show outdoes the various special forces attacks and hostage rescues, I will say I found this political staff a bit more hysterical with their various colorful arguments and office talk. The show is also helped by many insanely talented performers who have been in everything from Law & Order type procedurals to Broadway and soap operas so no matter what episode you view, you have distractingly great performances that will glue you to the screen when you’re not being thrilled or witnessing the inescapable wordplay.

Accompanying the first-rate drama and acting is seeing the various presidents, VPs and even the potential running candidates evolve over time as it becomes a great guessing game for the viewer to figure out who is going to be a hostile or friendly foe and who is going to never going to learn from their inept mistakes and insecurities. So because of this high-stakes material, one should be able to be easily blown away in one easy Netflix binging session.