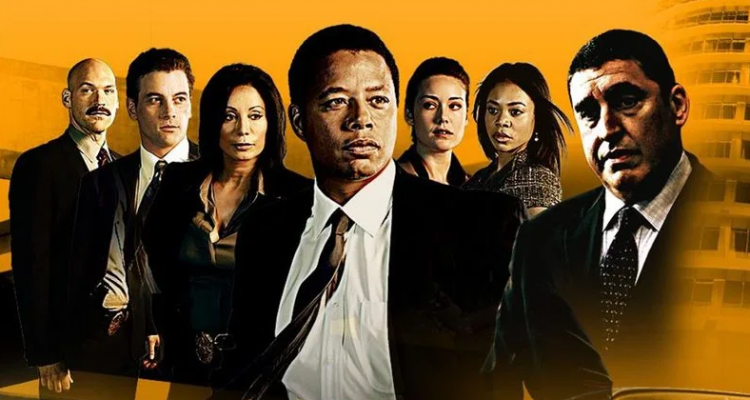 The only truly disappointing installment of the rather popular franchise by far. And for so many awfully different reasons.

Plot: Developed by Blake Masters (Brotherhood), this first non-New York City-set spin-off is a foray into the glitz, glamour and guilt of Los Angeles. From the tony Beverly Hills to the seedy side of Hollywood, LAPD’s elite Robbery Homicide Division investigates high-profile crimes of the West Coast with prosecutions codified in the California Penal Code.

Review: I have always been a rather staunch fan and defender of the popular yet never-ending Law & Order franchise. But even I can see when something is just not cutting the mustard altogether. Like some of the other short-lived spin-offs, this one got cancelled but in all honesty this was a mercy killing at best. I think the average joe can agree that the cast and crew have have displayed great skills in their respective departments before (except for Megan Boone; we’ll get to her in a minute). The L.a. scene itself is especially game for various scandals and crime show material yet somehow the whole execution of this show felt entirely off.

Despite having some nice non-flashy scenery and musical montages, the show kept shifting tone every episode while feeling like many of the cases themselves were intriguing but somehow felt bland by the time each episode got anywhere near the courtroom section. Perhaps it was because they were relying too much on the gimmick on it being set in L.A. versus actually doing all the required plot outlines and story structure?

There were a few intriguing court cases but they were few-and-far inbetween, including a police scandal that required the Lt. which was very well-performed. Terrence Howard manages to chew scenery and it’s all rather welcome as he has many awesome closing speeches in every scene he’s in that he commands, let alone demands your attention. Hall’s Evelyn character neither leaves an impression nor becomes unwelcome, she’s just there to be another talking head. Molina’s character attorney turned Lt. Gonzales was honestly the only sign of creativity throughout this single-season as he took on plenty of anger-fueled cases and you got a picture of what drove him to win each case in the name of true justice.

Now, onto what truly sunk this boat of a show: Megan Boone’s Lauren character. Law & Order has often been noted for being extremely picky about who it casts on its various entries, even typically getting award-winners as well as Broadway and soap opera actors with massive range. Even on occasion getting unrecognizable good performances from rather infamous A-list or B-movie ridden performers. Here was such an exception as Boone neither convinced nor conveyed any sense of reality to where I doubt even a parent would be impressed by this non-existent performance. I guess she has the looks but that is honestly the only compliment I can dig up but that’s so not even remotely related to the show’s quality. (P.S.: I since saw Megan’s role on The Blacklist and she was very awkwardly out-of-place there as well; and that was three years after this show got iced.)

The show did try to belong somewhere though but changes that happened too late in the run and stupid NBC executives airing episodes out of order only made this mess that much more confusingly underwhelming. Winters and TJ both had some formulaic but still somewhat promising buddy cop moments as well as bizarre mysteries to solve. TJ got to join another the always growing list of “Characters with Questionable Lawbreaking Habits” which wasn’t unwelcome, especially for this franchise. But then after they introduce this behavior, he isn’t seen much anymore, making one wonder if any of that stuff was truly germane to begin with. Who cares anymore?

One true improvement was having Megan’s character finally exit stage right and replacing her with the beloved Connie from the original show. But the longer I think about that, it seemed like a rare publicity stunt casting decision for this franchise as opposed to actual improvement. The other guest stars were not half bad either but minor diamonds in the rough. Having Peter Coyote in any movie/show is good enough reason to watch but he didn’t get to display much here either, just another typical boss who gives exposition to the protagonists if not the TV viewers.

My “closing argument” for thus show is that it could’ve improved overtime but since it left a sour taste from the first portion of the season that it never recovered from after all the changes, it definitely didn’t have anything else to reel in even the most forgiving viewer after awhile. Never completely awful but still middle-of-the-road mediocre. This is a rare disappointing hour for the beloved franchise which I hope it never sinks down to again.