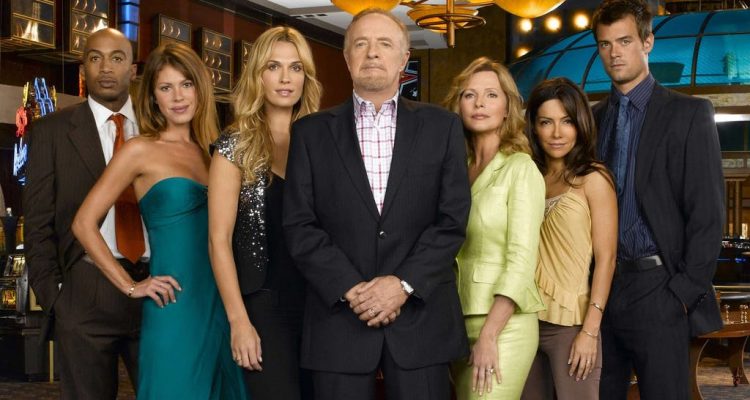 A silly stylish bit of escapism that works best for those who are able to assemble like-minded pals who love guffawing at low-brow, trashy mayhem.

Plot: Ed Deline (James Caan, The Godfather) is a strict ex-CIA officer who goes from being head of security to being president of operations of the Montecito Resort & Casino. He leads a team of people to address issues that arise within the working environment, which includes: valet parking, restaurant management and casino security.

Review: Seasons 1 through 4 follow Ed’s outrageous adventures with various other subplots thrown inbetween the conflict of the week. In Season 5, former Marine Danny McCoy (Josh Duhamel), Ed’s former protégé, becomes the Montecito’s new president of operations. Following crossovers in Seasons 2 thru 4 of Crossing Jordan and featuring just as stylish a take on the city of Las Vegas as any CSI episode, it’s easy to see why this show became a huge hit for five years. The show also benefits from various cult celebrities guest starring and having various mayhem occur. Wether it’s trying to be the next Aaron Spelling type trashfest or merely just popcorn entertainment, there’s no denying that it knows what it is. Sexy people, different cases and light humor at least maintain that it’s trying to maintain its own sense of fun instead of resort to silly, soapy material like Dallas or guilty pleasure territory like Baywatch.

At times, I’m surprised to not see any prominent producer like Jerry Bruckheimer credited at the end of every episode! Season 1 guest stars include: Christian Kane, Sean Astin, Jon Lovitz, Alec Baldwin, Mimi Rogers and Jean-Claude Van Damme (as a fictional version of himself no less!). Season 2 guests are minuscule in comparison but there are Dean Cain, Dave Foley and Sylvester Stallone with Lovitz’s character returning. Season 3 guests are Lara Flynn Boyle, Rachael Leigh Cook, Dale Dye and more reality/NASCAR type celebs.

Season 4 has some of the action set in Hawaii some of the time and the guests include: Adam Carolla, Vincent Pastore, Sandra Bernhard, Los Lonely Boys, John Legend and Judd Nelson. Season 5 adds Tom Selleck to the main cast and has guests like Terry Bradshaw. The show starts off playing all its best cards, so to speak before getting comfy in Season 2 and then constantly going for the ridiculous for the remaining three seasons so that viewers will keep watching. It wants to be fun yet half the time the fun comes from one counting the number of cliches they can find each season, if not the repeatable number of kidnappings, hostage taking and weddings that occur. If you want some stupid fun, there’s plenty to knock yourself out with. If not, you’re honestly not missing much.